THE BIG SLEEP —–“My, my, my! Such a lot of guns around town, and so few brains!”  Raymond Chandler’s 1939 novel–his first–introduced private detective Philip Marlowe to the sin-ridden L.A. noir-land of our pulp imaginings. This classic 1946 adaptation gave Humphrey Bogart the fedora, flippancy and .45 of the sardonic tough guy, taking over the role from Dick Powell’s surprising turn in 1944s swell Murder, My Sweet. As it frequently happens—Casablanca is a prime example—kismet worked as much as assembled talent in the final result, a critical and audience hit with enduring reputation and popularity. *

Los Angeles-based shamus Marlowe is hired by a sickly retired general who wishes to clear his youngest daughter’s gambling debts, being blackmailed by a shady fellow fronting as a bookseller.  Kid sister ‘Carmen’ (Martha Vickers) having assorted issues, elder sis ‘Vivian’ (Lauren Bacall) aids Marlowe in his increasingly perilous investigation. A spiderweb of motives, urges and double entendres is peopled by a variety of hot dames, low-lifes, fall guys and thugs, peppered by Marlowe’s relaxed yet tart comebacks to passes, tips, taunts and threats, with some nasty rough stuff thrown in for good mean measure. Maintaining a long streak of diverse hits, Howard Hawks direction is sleek (he also produced), with Sidney Hickox on camera, Max Steiner scoring and the Warner’s sound team making sure those gunshots impact as required. 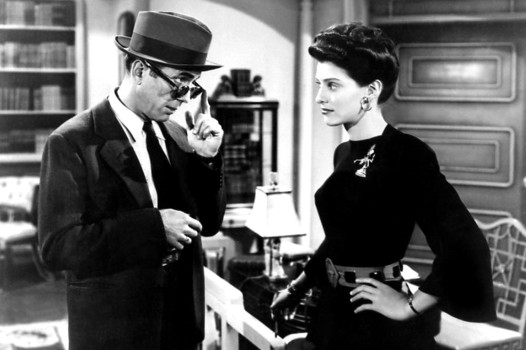 “She tried to sit on my lap while I was standing up.”

The screenplay is packed with great dialogue exchanges; it’s testimony to Hawks adroit pacing and deft handling of the cast that the bluff banter, biting asides and frank sexual teasing carry you along with wicked amusement and easy acceptance of the hard-boiled genres stylized ritual instead of wearing you out with droning tropes people would never use in non-noir life.

Bogart could phone things in when he felt like it (Dead Reckoning, Chain Lightning, Battle Circus, Tokyo Joe) but when he cared he bought it and owned it—and this is one of his best. More than a dozen actors have played Marlowe, but this private dick ultimately belongs to Bogie. Bacall’s fine, but the real steam gets generated by Martha Vickers (too brief) as the nymphomaniacal Carmen, Sonia Darrin’s tasty spite as schemer ‘Agnes Lozelle’ and Dorothy Malone’s cut-to-the-chase book-shop scamp (have glasses, will doff).

“You go too far, Marlowe.”————“Those are harsh words to throw at a man, especially when he’s walking out of your bedroom.”

The labyrinthine but highly amusing screenplay was a group effort between Jules Furthman, William Faulkner and newcomer Leigh Brackett, with unaccredited assistance from Hawks and Julius J. Epstein. Despite a personality-complicated and timing-delayed production, the $1,600,000 result worked like a dream, earning $10,682,000 total, placing spot #32 in 1946.

A 1978 remake, despite an all-star cast, lived down to the title by being so boring it knocked scant audiences into group naps.

* Piecing the case together—- Film rolled in October, 1944, right on the heels of the release of To Have And Have Not, directed by Hawks, with Bogart, and famously introducing Bacall. Warner’s made the call to postpone release until the war was over, so as to first shoehorn in more war films. They must’ve been more optimistic than most people, who assumed a prolonged invasion nightmare of Japan was certain. Meanwhile, To Have And Have Not landed big, so they stuck sultry newcomer Bacall into Confidential Agent; miscasting and inexperience saw her lambasted.

Though Hawks original cut was shown to troops in the just-retaken Philippines in early ’45, re-shoots were ordered which added more potent Bacall-Bogart material, dropped several other scenes and saw sexy Martha Vickers (who Hawks had been flinging with) get her part chopped down so she wouldn’t eclipse Bacall.

Sonia Darrin suffered a crueler cut—she wasn’t even given credit: in 2016 the 92-year old Sonia related that a spiteful Jack Warner got into an argument with her agent and in revenge she received no billing—in one of the best roles in the picture. The careers of both Vickers and Darrin never regained traction, their wake-up call from The Big Sleep showing that there was indeed a nasty burn to be had under Los Angeles sunny facade (trivia tie-in, both fledgling actresses had done bit parts as villagers in Frankenstein Meets The Wolf Man, pattycake since they hadn’t yet met more dangerous Jack Warner).

Besides Bacall, another who did benefit was 19-year-old Dorothy Malone, who had 12 mostly uncredited bit parts notched; her frolic-inclined clerk drew positive notice here and the sultry Texan began moving up the ladder. Along with the writers and director doing their best to both cut or change the books seamier elements while still inserting coded sexual innuendo, there was a tension-go-round as Bogart’s deteriorating marriage (to wild alcoholic Mayo Methot) and unconcealed love affair with Bacall sent him into a spiral of depressed boozing that ate into the schedule. The first version ran 116 minutes, the revised, which cut a lot and inserted some new, ran 114. The first brings more clarity to the convoluted plot, the second adds more star-power spice. Both work.

Though the production had its share of hassles there were some good vibes attached—at one point flustered Jack L. fired a memo to the crew “Word has reached me that you are having fun on the set. This must stop.”

The book’s Marlowe was written as 33, Bogart was 45