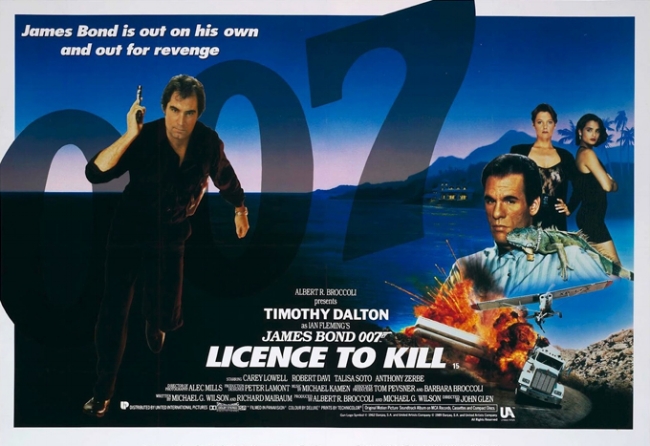 LICENCE TO KILL bumped off Timothy Dalton’s brief and disappointing tenure as James Bond, the 1989 installment managing to be both the nastiest in terms of violence and the weakest performer in the series at the box-office. Six years would elapse until Pierce Brosnan took over the tuxedo with Goldeneye.

Personal vengeance leads Bond on a rogue assignment to take out ‘Sanchez’, the brutal drug smuggler kingpin who maimed Bond’s CIA pal Felix Leiter and murdered his wife. The ‘Republic of Isthmus’ (cue Panama and Manuel Noriega) is the destination for the showdown, and 133 minutes are consumed before just desserts have been fully shaken and stirred.

Directed by John Glen, with a decided accent on meanness, and a cavalier attitude toward crafting performances out of a weak supporting cast. Written by Michael G. Wilson and Richard Maibaum. For Wilson it was the last of his five lame scripts for 007, before he switched to producing them (which he was quite good at); for Maibaum, this was the last of his 13 Bond credits, begun 27 years earlier with Dr.No.

Filmed on location in Mexico and Florida, neither showcased to much effect, the dark-toned and unpleasant $36,000,000 outing naturally has some of the wild stuntwork expected in a 007 rumble and there is one member of the cast who makes a vivid impression; 21-year old new blood Benicio del Toro, in his second film role, scoring as one of Sanchez’ more sadistic henchmen. The manner of the killings in this installment went into gruesome territory, the most explicit and off-putting in the series—Leiter’s mangling by a shark, the implication his murdered wife was raped, one man exploded in a decompression chamber, another impaled on a forklift, one burned alive, another shredded on a conveyor belt, one locked into a vat of maggots…..yucksome stuff for an audience action escapade.

The wolfish Dalton is the least appealing of Bond’s, charm notably lacking, all he does in this one is seethe. The supporting players are flavorless. Robert Davi’s swarthy Sanchez would be at home in a made-for-TV movie, Carey Lowell and Talisa Soto are conventionally model-pretty but bland. For some reason Wayne Newton was allowed in, as a charlatan evangelist—he has no trouble conveying oozy insincerity. I remember watching in the theater with friends, and three of us simultaneously exclaiming “What?Wayne Newton?!”

After 12 assignments, the invaluable John Barry was done with the series; Michael Kamen took over soundtrack duty. He does an obvious borrow from Barry’s Goldfinger theme, and does dutiful but lackluster filler in the course of the picture. Gladys Knight’s R&B-infused title song was not a diamond that lasted forever, although it seems to, wailing over five minutes.

At least it’s better than A View To A Kill.