McLINTOCK! —–“I know, I know. I’m gonna use good judgement. I haven’t lost my temper in forty years, but pilgrim you caused a lot of trouble this morning, might have got somebody killed… and somebody oughta belt you in the mouth. But I won’t, I won’t. The hell I won’t!”    Every John Wayne fan worth their biscuits knows that statement was followed by a roundhouse punch that clobbered bully Leo Gordon and sent him careening down a slope into a mud pit. Donnybrook!

Part amiable, part ornery, gruff but fair, cattle baron ‘George Washington McLintock’ (Duke) manages to handle interfering government clowns, pushy farmers, affronted Comanches, his daughter’s fumbling suitors and generous amounts of whiskey. But he’s met his match in the scarlet-tressed person of his estranged wife, the decidedly hot-tempered ‘Katherine Gilhooley McLintock’ (Maureen O’Hara), who puts the Irate in Irish when she returns to town (named for him) ready for a rumpus. Green-eyed with suspicion over G.W.s sexy housekeeper (Yvonne De Carlo), ‘Herself’s rumpus seems poised for some ‘Quiet Man‘ logic.  PC alert: this is not the movie with which to introduce humorless blamethrowers to John Wayne.  Well, __em’ if they can’t take a joke.

“I’ve got a touch of hangover, bureaucrat. Don’t push me.” 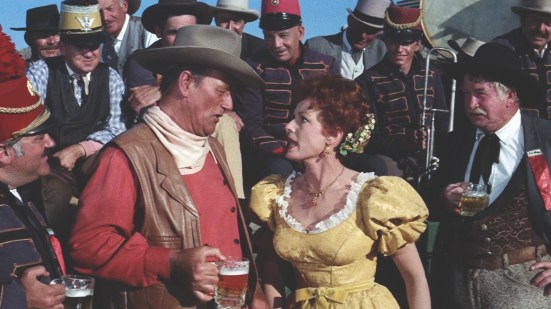 Following his rowdy, same-year tropical island farce Donovan’s Reef, this 1963 hit, a nostalgic favorite for many Wayne & O’Hara fans, was, like The Alamo, another family & pals affair with some of the star’s personal social-political lean stamped on it. Carousing buddy James Edward Grant wrote the screenplay (his 8th for Wayne), son Patrick co-stars, daughter Aissa has a bit and a wagon-load of Wayne regulars pack the supporting cast. Elder son Michael produced, and brought the handsome 127-minute vehicle in with efficiency, under budget for $2,100,000. * 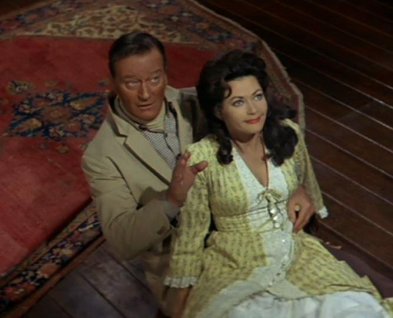 The Battle of Sexes angle in Grant’s script takes off on “The Taming Of The Shrew”, while the pinches and thumps of Rugged Individualism vs. Public Handouts come from the heartland of Duke country. Fortunately, this time Grant doesn’t sledgehammer the preach, which battered at The Alamo. It’s a solid role for Wayne, and O’Hara clearly relishes the bout. Of the five screen matings of these close friends, while not the best (The Quiet Man) this is certainly the rowdiest. It’s also fun seeing her faceoff with De Carlo, no mean slacker in the allure department. While Wayne easily dominates the show, he doesn’t hog it, and everyone in the large cast gets a chance to deliver the goods; apparently it was an enjoyable picture to make, and it shows. 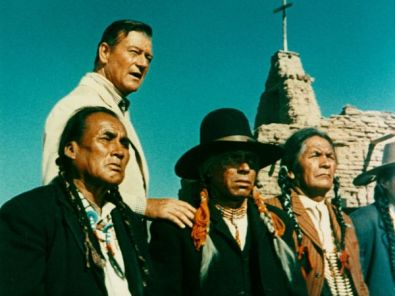 The famous mud slugfest incorporates 42 people in the brawl; following the time-honored western tradition, when somebody throws the first punch, everyone else in the vicinity immediately starts fighting.

Spirited music score by De Vol includes the catchy title tune “Love In The Country”, sung by The Lamplighters. Outdoor ace William H. Clothier on camera makes it all look grand in Panavision and Technicolor, filming in Arizona. The sprawling McClintock homestead is the San Rafael Ranch House near Lochiel, close to the border with Sonora, Mexico.

Directed by Andrew V. McLaglen; next to Shenandoah, his best credit. This socked spot #22 for the year, grossing $14,500,000 from cave dwellers like yours truly. Self-styled sophisticates won’t sit still for this one, but we refer them to Rhett Butler’s fits-all kissoff. 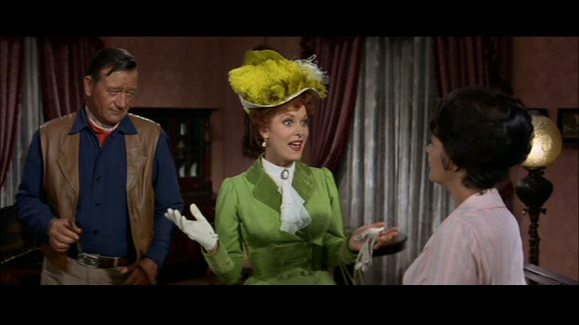 “He can’t help it – he’s just ignorant. He doesn’t know any better than to tell the truth. And I can’t help this stupid look. I started acquiring it as you gained in social prominence!” 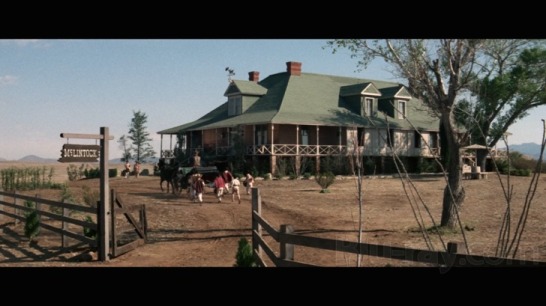 * Set in the 1890s (the uber-sensitive may feel it belongs there), the script at one point has Wills, 60, & Wayne, 55, reminisce about fighting Comanches “back in the 40s“, which, if math (even mine) is any guide, would have made them some pretty capable little kids. Of course, this is farce, not drama, but general Western Movie Logic is a field of study worthy of degree status. James Edward Grant made similar “they won’t notice” goofs in The Alamo and The Comancheros. The Republic has survived (though, under the present onslaught of lies from on-high, it’s shaking something fierce).

** Somewhere there should be a statue to the person who first uttered “Lighten up!” Perusing current-day reviews for this early-60s chestnut, which was obviously a self-kidding affair about a rapidly vanishing past, one has to don hip-boots to wade through sententious stratas of sermonizing about its archaic attitudes. Swinging wildly in the approaching dark of CensoriaLand, we believe the movie was (a) comedy and (b) fiction), and (c) came out a half-century ago, but arguing that with the wafer-skinned (oops, I just offended cookies!) would assume they had (a) humor and (b) perspective. One doesn’t have to agree with Wayne’s politics (we don’t) to like the guy and his movies (we do). Years back, my girlfriend at the time (a wonderful woman who left us too soon) was about as  capital-L Liberal as you could get without actually becoming a hyphenated unicorn. When we met, and began fun fencing, she automatically detested John Wayne. Of course, she had never seen much, if any, of his movies. Folk, the cure process was gradual, but by the time we got around to McLintock! she was won over. Score one for Patience as a Virtue, though the tradeoff was having to sit still through a James Taylor concert without committing hara-kiri (and he was…really good!). 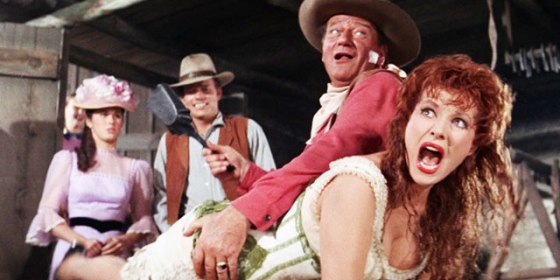 One thought on “McLintock!”