MARY POPPINS RETURNS, 54 years after the 1964 Julie Andrews classic, with this hit & miss 2018 followup. The commanding, unflappable, benignly magical governess and her service-rescue of the beleaguered Banks family morphs from the original bright and cheery Disney palette suggesting Edwardian London of the early 1910s to a darker and gloomier, economy-blighted 1935.

Kiddies played by the inimitable Karen Dotrice and Matthew Garber in Walt’s showpiece  are now the grown-up ‘Jane and Michael’, in the sure hands of Emily Mortimer and Ben Whishaw. Jane’s a labor organizer (that would fry Walt’s mustache) and the widowed Michael has three tots of his own (Pixie Davies, Nathaniel Saleh and Joel Dawson). Faking concern, the corrupt banker holding the note to the Banks home (Colin Firth) plans to repossess the place unless the desperate Michael can pull off a miracle. The wind provides that in the form of the ageless Mary Poppins (Emily Blunt, perfectly cast) who proceeds to set all wrong right, with help from jolly lamplighter ‘Jock’ (Lin-Manuel Miranda), the bygone Bert’s apprentice.

David Magee wrote the screenplay, Rob Marshall directed.  Magee did good work on Finding Neverland and Life Of Pi.  Marshall is responsible for Chicago (the St.Valentine’s Day Massacre of musicals) and Nine (2½ is more like it), so in my Book of the Dread he has a lot to answer for. Thankfully, he definitely improves on those with this, although much of the soft and cheery whimsy of the first outing has been replaced by the noise and racket of today’s slam-you-senseless attitudes. As for the songs, they’re cleverly written, but too dense to be catchy and there is nothing here that begins to match the melodic or lyrical lilt and lift of the old tunes. Some of the numbers are eye-dazzlers, some are exhausting, and eventually, they all begin to sound alike. It’s just too self-aware, and the insertion of a long and loud segment with Meryl Streep as a sort of knock-off of Ed Wynn in Gypsy drag is jarring—yes, she’s great, we know, we bow, but must she be EVERYWHERE?

The kids are fine, and stage wunderkind Miranda is impressive. 93-year-old Dick Van Dyke does a cameo at the end that’s some of the best acting he’s ever done (and he doesn’t slaughter an accent this time). Firth is always a treat, even as a dastard. Next to the shiny new Miss Poppins, the best in the cast is Ben Whishaw (Bond’s new ‘Q’), who, though saddled with enough grief and woe by the storyline to faze Churchill, manages to fine-line some genuine pathos. The lovely, sharp and slyly teasing Emily Blunt is just about as good a choice as you could imagine, diction divine and poise perfect, her manner simultaneously imperious, mysterious and mischievous—and she can sing up a storm, though her M.P. is several degrees chillier and more austere than Julie Andrews (apparently closer to the books conception). Emily knocked another one out of the park in ’18 with the ripping horror goodie A Quiet Place. Who doesn’t like her? 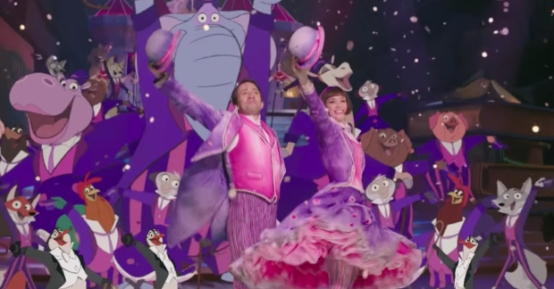 “We’re on the brink of adventure, children. Don’t spoil it with too many questions.”

Marshall makes superb use of live action mixed with old-style hand-drawn animation for the big visual set-pieces, which include a swell series of escapes, especially a bathtub adventure that swirls into a world of dancing aquatic creatures, and a ceramic bowl that serves as a home base for an animated circus. More than 70 animators had their hands in on the fun. Really neat stuff. 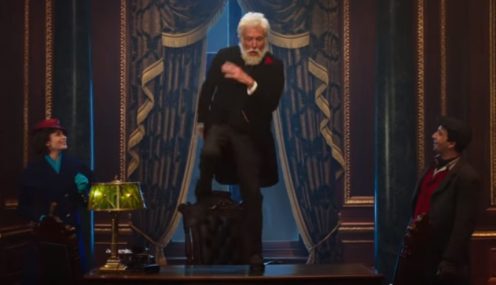