AMERICAN MADNESS is a fast-paced 1932 drama directed by Frank Capra, with story and screenplay by Robert Riskin, the third of their eight collaborations. Zipping along in 75 minutes, it stars Walter Huston as a straight-shooting bank president who has earned the business and loyalty of his customers based on mutual trust, but this isn’t enough for his disgruntled Board of Directors, eager to force his resignation. That seems a fait accompli when a robbery—an inside job—not only starts a bank run, but looks to ruin his marriage as well. 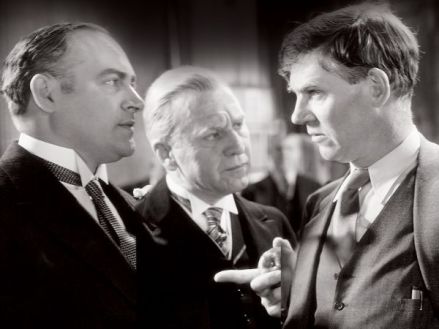 Pat O’Brien (hitting it hard with 9 movies that year) is the trusted-like-a-son clerk who gets the rap for the heist, but he’s really protecting Huston from finding out that Huston’s wife (Kay Johnson) was caught in suspect (though innocent on her part) company with slimy manager ‘Cyril Cluett’ (Gavin Gordon), who we know was in on the theft. 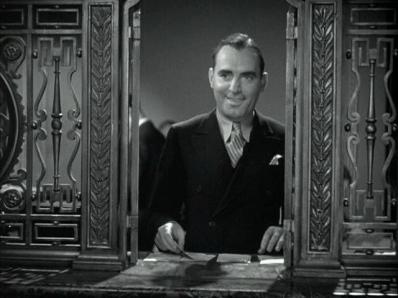 Huston is customarily dynamic, O’Brien settling into his sturdy streetwise persona. Miss Johnson’s charm school diction includes that dorky, fake-swank manner so many actresses of the 30s employed when saying the word “party” so it comes out “pahw-ty“. Gordon is about as believable a “ladies man” as Richard Simmons, complete with the most unreal eyebrows this side of Marlene Dietrich at her campiest. * 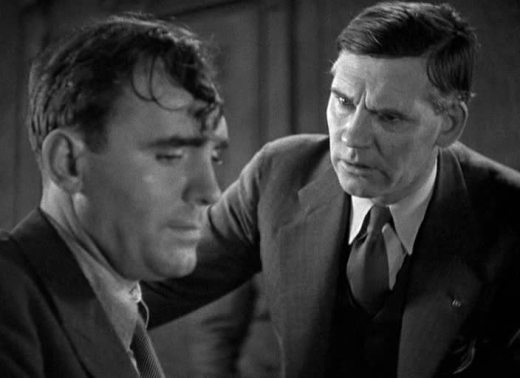 Capra’s direction is excellent, especially the crowd scenes of the bank run chaos, which are masterfully choreographed, photographed (Joseph Walker) and edited (Maurice Wright). The defiant characteristics of the mob-beleaguered fellows played by Huston and O’Brien would be further honed later on by Gary Cooper and Jimmy Stewart in Capra’s Mr.Deeds Goes To Town, Mr.Smith Goes To Washington, Meet John Doe and It’s A Wonderful Life, with the institutional panic action and resolution particularly foreshadowing the last mentioned. **

*  The ditzy blonde telephone operator whose confidential blabbing sparks the bank run was Polly Walters, who made her last appearance in this film, having logged 18 parts in just two years. A pert and provocative 19, she left the movies for Broadway, left the stage for married life and lived to be 81. Google Images has some racy pix of a not-shy Polly back in her brief Hollywood heyday. On the, uh…other side of the ledger, Gavin Gordon, who makes such an unconvincing “lady-killing bachelor” here, was the longtime partner of Edward Everett Horton. Kay Johnson was the mother of actor James Cromwell.

** Capra & Riskin seized the mood of the day. From January, 1930 to March of 1933 more than 9,000 banks failed.  Riskin’s initial idea came from a script called “Faith”, and Huston’s character of ‘Thomas Dickson’ was based on Italian immigrant Amadeo P. Giannini, whose 1904 Bank of Italy grew to become Bank of America, which financed much of the movie industry, including Colombia Pictures, which made this film, produced by Harry Cohn. Whatever you may think of what BofA has become, the daring and innovative Giannini (1870-1949) was quite a towering figure, well worth some of your casual armchair research. Like Capra, one more immigrant who became an American success story. A quote from Amadeo: “Serving the needs of others is the only legitimate business today.” Quite a cry from the parasitic financial vultures hovering over us today.