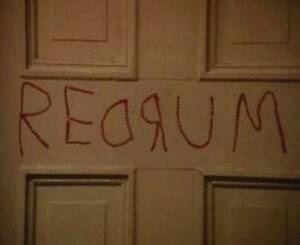 THE SHINING —–“Wendy, I’m home.”  A great director tackles a great book from a great writer, uses a great actor in a great setting, and the results are….?

‘Jack Torrance’ (Jack Nicholson), an aspiring writer who had best stay away from alcohol (know any?), takes a winter-caretaker position at a grand and isolated hotel in the Colorado Rockies. Left alone with his mite-too-chipper wife, ‘Wendy’ (Shelley Duvall), darkly imaginative young son ‘Danny’ (Danny Lloyd), and a full-stocked bar, Jack develops a world-class case of cabin fever when he begins to hallucinate (apparently) ghosts and other characters from the hotel’s grisly past. Meanwhile Danny begins to see horrific images as well. Wendy sees nothing but the rising level of reality disconnect from her loved ones. The hotel’s vacationing chef ,’Dick Halloran’ (Scatman Crothers), who shares a telepathic ‘shine’ with the boy, senses danger and returns in time to find the Torrance family in psychotic free-fall. 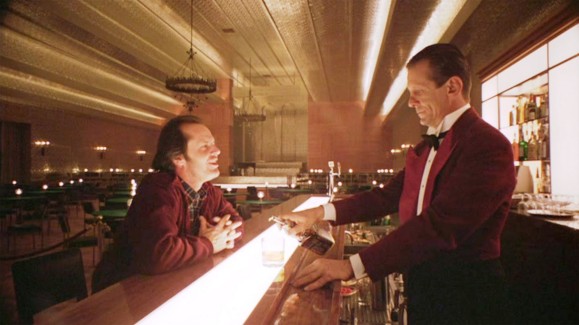 “Here’s to five miserable months on the wagon, and all the irreparable harm it has caused me.”

Produced & directed by Stanley Kubrick, this $19,000,000, 142-minute 1980 interpretation of Stephen King’s 1977 best-selling psychological horror opus (688-pages in paperback edition) is, as with all Kubrick’s films, a visual grand slam home run. In terms of how the adaptation, co-written by Kubrick with Diane Johnson, stacks up against the book, we call a base hit with a showy slide into second. Fidelity to the material? More like a bunt that gets you to first. Critics were not wowed, and there was a good deal of grumbling from loyal fans of the intense novel. Box office results recorded a rather disappointing 18th place in the States, with a total worldwide gross of $61,487,000. Re-evaluation (and reams of thematic over-analysis fit for psychiatric care) has many champion it as a masterpiece. Well, it looks like one….* 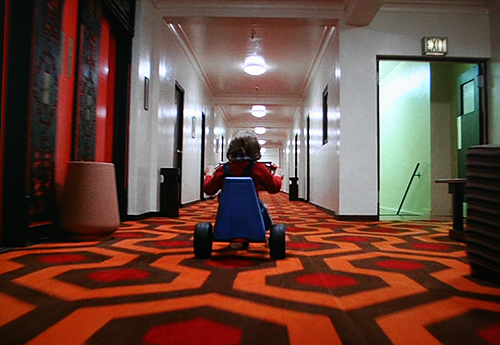 Among those let down by the director’s vision was the guy who knew the material best, the author. While hardly the first time for a ‘what-have-you-done?’ reaction from a writer over how his baby was spanked, Master King was on-target about how Master Kubrick missed his. As someone who appreciates both Kubrick and King for their brilliance, yet isn’t so enamored of either that I’ll swallow So-So as Divine, my ticket-buyer take on this engaging, highly watchable but hollow exercise in style has basically hewed true since I first saw it nearly four decades ago (gasp). I liked much of it, yet was overall underwhelmed.  Per many fans of the book, particularly vexing was the director’s choice to gut King’s truly cinematic finale with the ‘hedge animals’. Time  marching on, second-wind looks involved lots of guffaws with friends, rewinding it on VHS tapes (and refilling the bowl–this was the 80s), what with Jack’s biting sarcasm and exuberant axe-whacking into the “Here’s Johnny!” nuttiness. Seeing it lately, after many years, not only did it summon nary a chill, its weaknesses still stood out in greater relief than its strengths. 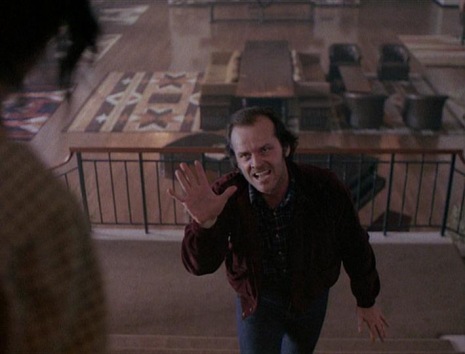 For starters, it’s miscast all-round. Primed for a “Nicholson meltdown” after a decade of classic tantrums, the Jack was let out of the bag too early here: with so little buildup or sympathy, there’s no trust to lose and therefore heighten fright when he totally wigs out . It’s a flamboyantly fun performance, certainly, but it’s more in line with his later romp as The Joker in Batman: he’s so wacky you can’t take it seriously—and the script and direction are asking you to.

Gawky and squeaking, Shelley Duvall was apparently chosen so that the audience would empathize with Nicholson’s fuming Torrance. In her defense, the shoot was a ravaging emotional trial, as Kubrick deliberately kept her in a state of nervous anxiety per the character; the whole outdated, discredited cruel-to-be-kind tack, something people who fawn over the painstaking, pain-making director would lambaste as sexism if someone else did it.  After the misogyny of A Clockwork Orange, not much of a surprise. Bringing up the ‘RED-RUM!, six-year-old moppet Lloyd as the crucial fulcrum Danny also summons zip for empathy. In a story where investment in the characters is key, which King made integral, Kubrick doesn’t allow us to care what happens to any of them. 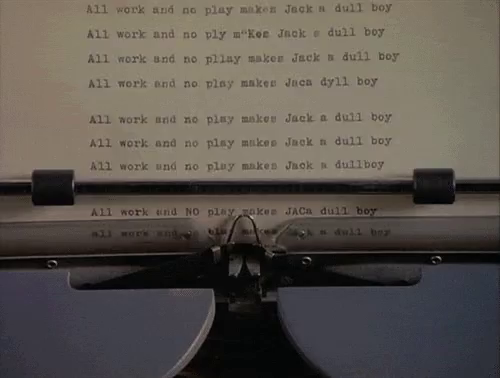 The art direction is properly austere: the few exteriors used Mt. Hood’s Timberline Lodge in Oregon, with establishing shots done in Montana’s Glacier National Park. The music score selections go to the portentous. I just don’t find the film scary at all—humorous and skewed, yes, but frightening? Nah. Beyond reproach is John Alcott’s superb cinematography—much done with the new-fangled Steadicam: for my two bits worth, the best shot in the picture is the eerie tracking sequence when Danny rips through the Overlook’s hallways on his Big Wheel trike (the sound crew earns their pay here as well). Otherwise, for chills, the signature shot of the elevator blood flood, the ‘startling’ twins…no sale. Granted, that bathtub vixen (Lia Beldam) turning into the grotty crone (Billie Gibson) is a yuckworthy tease.

Joe Turkel is quietly and eerily compelling in his scenes as loyal “you can tell me” bartender ‘Lloyd’, but when the imagined (or ghostly) ‘Delbert Grady’ (Philip Stone) let’s Jack out of the locked pantry—a physical act—and when non-crazy, shine-absent Wendy suddenly begins seeing things during the finale, the script’s own logic backs itself into a corner. The corner ends up in the Hedge, which goes nowhere. 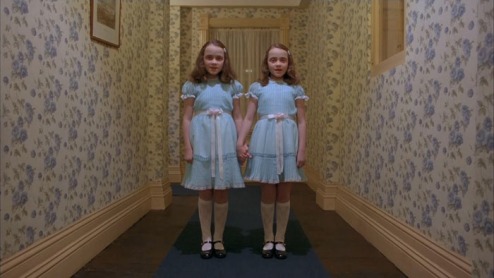 * Basically a 3-character gig with a handful of walk-ons (and no special effects of the hedge critters!) took Kubrick a full year to shoot it. Examples: the initial bar scene between Nicholson and Turkel was rehearsed for six weeks; the bit with Duvall waving the baseball bat at Nicholson went through 127—One Hundred & Twenty-Seven—takes, literally a Guinness World Record. ‘Artist’ is one thing, perfectionist another, plain asinine is something else again. Like numerous visionaries and craftsmen in the profession, Stanley Kubrick was a Great director, but not every-thing he did deserved the same honorific. “All work and no play makes Jack a dull boy.”  “How do you like it?” 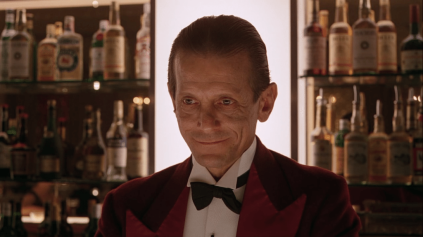 Duvall, whose hair fell out in clumps due to stress, later told Roger Ebert: “Jack Nicholson’s character had to be crazy and angry all the time. And in my character, I had to cry 12 hours a day, all day long, the last nine months straight, five or six days a week. I was there a year and a month…After all that work, hardly anyone even criticized my performance in it, even to mention it, it seemed like. The reviews were all about Kubrick like I wasn’t there.”

King: “[The movie] is so misogynistic. I mean, Wendy Torrance is just presented as this sort of screaming dish rag. …She’s basically just there to scream and be stupid, and that’s not the woman that I wrote about.”  The reams of current-era praising this as “one of the greatest horror films ever”? Sorry, folks, you can hail Stanley ’til the Droogs come home, but at some point put a sock in it. This, coming to you from a frustrated writer, known to over-indulge, currently stuck in a house by a winter storm.  “Wendy? Darling? Light, of my life. I’m not gonna hurt ya. You didn’t let me finish my sentence. I said, I’m not gonna hurt ya. I’m just going to bash your brains in!” 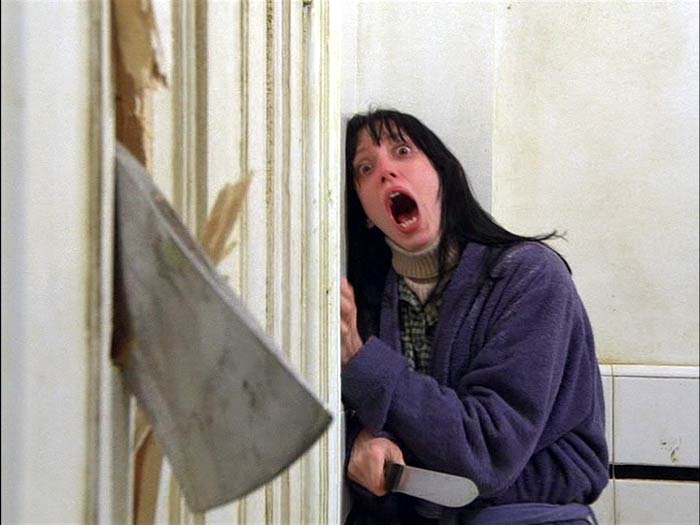 One thought on “The Shining”