THE SEA WOLF —–brutal 19th-century sea captain ‘Wolf Larsen’ (Edward G. Robinson) lays some of his philosophy on shanghaied and ‘soft’ crewman ‘ Humphrey Van Weyden’ (Alexander Knox): “I held that life was a ferment, a yeasty something which devoured life that it might live, and that living was merely successful piggishness. Why, if there is anything in supply and demand, life is the cheapest thing in the world. There is only so much water, so much earth, so much air; but the life that is demanding to be born is limitless. Nature is a spendthrift. Look at the fish and their millions of eggs. For that matter, look at you and me. In our loins are the possibilities of millions of lives. Could we but find time and opportunity and utilize the last bit and every bit of the unborn life that is in us, we could become the fathers of nations and populate continents. Life? Bah! It has no value. Of cheap things it is the cheapest (laughs).” 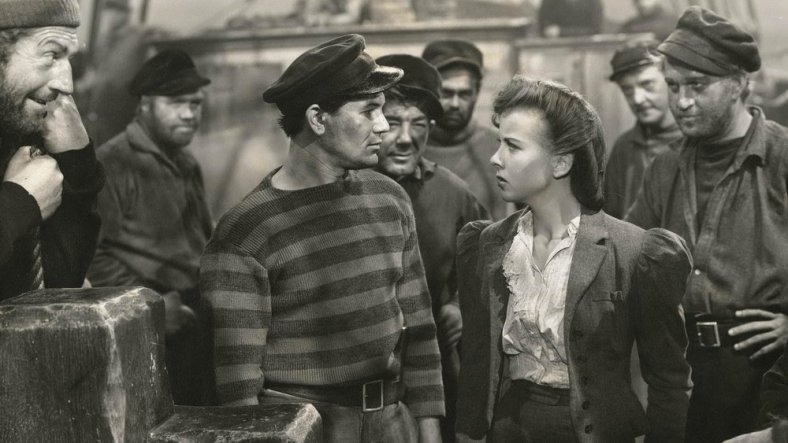 Jack London’s 1904 novel, based on people he knew and actions he’d witnessed, has been done a dozen times, in silent films, foreign copies and TV-movie adaptations, with this 1941 bruiser thus far remaining the go-to version, for powerful dramatic effect, if not exact fidelity to the source.

When a collision in San Francisco fog sinks their ferry, cultured writer Van Weyden and escaped convict ‘Ruth Webster’ (Ida Lupino) are saved by the crew of the Ghost, a seal-hunter on its way into the Pacific. Their “rescue” rapidly becomes virtual enslavement by the ship’s tyrannical captain: Larsen’s cruelty is dished out to his roughneck crew, which includes the rebellious ‘Leach’ (John Garfield), drunken doctor ‘Prescott’ (Gene Lockhart) and the vicious toady ‘Cookie’ (Barry Fitzgerald). Beatings and psychological humiliation make the Ghost hell on water. 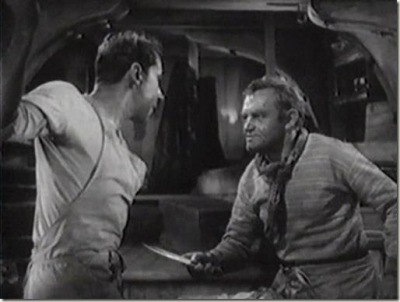 Expertly directed by Michael Curtiz, with Sol Polito’s fine chiaroscuro cinematography working tightly framed shots and expert application of shadow & light to amplify the sense of claustrophobia and the feeling the ship and its denizens exist in a parallel nightmare world.

Driven, severe and paranoid Captain’s Ahab, Bligh and Queeg would meet their match if they crossed sails with the shrewd sadist Larsen, who’s not so much wolf as wolverine. Well-read and a philosopher, albeit the unforgiving sort, Capt. Larsen is one sadistic S.O.B. This is one of the great Edward G. Robinson’s best-ever performances, and one of the top villain roles from the era. Referring to Larsen as “a Nazi in everything but name”, he resisted what must’ve been an urge to indulge in histrionics; his calm, casually dispensed cruelty and twisted rationalizing is put over with such assurance that you can accept someone with his small physical stature could bully and bash his larger underlings. A quote: “I remember just before going onto the soundstage, I’d look in my dressing room mirror and I’d stretch myself to my full 5’5″ or 5’6″ – whatever it was – to make me appear taller and to make me able to dominate all the others.” He deserved an Oscar nomination for this addition to a long and sterling gallery (he never got one during his career). 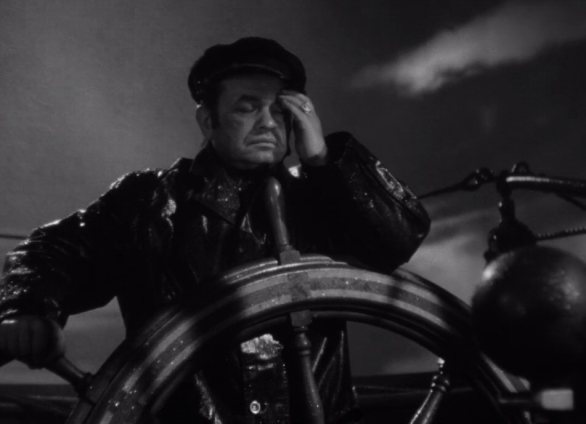 “He needs you to break your backs for him; maybe someday you’ll get wise to that’.

The co-stars are variable. Garfield is okay (yet another of his chip-on-shoulder fellas), Lupino somewhat better, although their sandwiched-in love angle is forced. Knox was never an actor who roused much excitement, but he’s good here, in his Hollywood debut at 34, his Van Weyden’s outlook on life dueling with Larsen’s, who merely catpaws him. Playing against type with apparent relish, Barry Fitzgerald is excellent as the rat-hateful cook, and the ever-dependable Gene Lockhart has one of his career-high moments, just splendid as the tormented doctor, raging pent-up defiance from the mainmast. (Fan tidbit—he was also June Lockhart’s dad.) 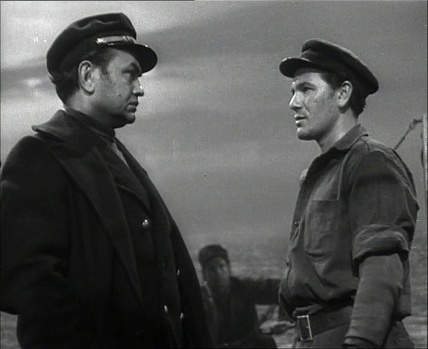 * This was one of the ‘hidden Commie message’ movies that riled the post-war emergent right-wingers: Rossen, Garfield, Knox and Da Silva were blacklisted, Robinson was ‘grey-listed’.