BUFFALO BILL was quite a character. Thanks to his skill as a scout and hunter in the Old West, his gift for self-promotion, helped by truth-mangling pulp writer Ned Buntline, William F. Cody (1846-1917) eventually became one of the most famous Americans of the 19th-Century, his legendary Wild West shows touring the globe. Some Cody exploits were genuine, but much of the ‘Buffalo Bill’ mystique was pure fabrication and when director William A. “Wild Bill” Wellman took on this project he and writer Gene Fowler spent months creating a script that deconstructed the man from the myth. Then they wised up, got drunk, and had several other writers rework it back into this shallow, good-looking paperweight 1944 escapade. * 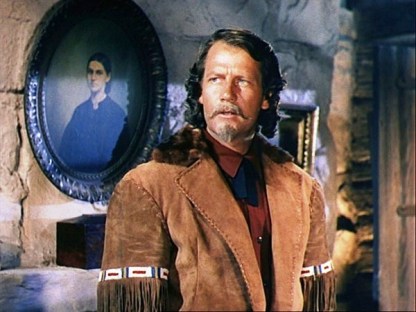 “That’s nature’s way, Louisa. When anything becomes too old to be useful, it’s just pushed aside.”

Running only 90 minutes, the story shoves the final thirty years of Cody’s life into the last five minutes, with a classic cornball finale farewell with a maimed boy on crutches crying “God bless you, Buffalo Bill!”

The script is generally lame gloss, though it is one of the first movies to bring up the White Man’s treatment of the Native Americans (Cody not only fought them, he stood up for the tribes and their way of life) and deserves at least some credit for going there, as the military and politicians are shown up to be callous and ignorant. Of course, it does this after one hell of a battle to give the crowd their Technicolor money’s worth. Costing $2,004,000, filming on numerous scenic locations in Utah and Arizona, it’s visually grand under the eye of cameraman Leon Shamroy. McCrea looks great, fitting the image, and does his standard solid job.

Though critics pooh-poohed it, the hero-favoring public ate it up—there was a war on, THE War—and grosses hit $6,500,000, #42 for ’44. The spectacular battle scene was the clincher, with hundreds of extras charging through a canyon creek into a headlong smashup. Naturally, the real 19th-century Nebraska fracas was just barely a skirmish, but this 20th-Century Fox wingding is a real whopper. The sequence was so effective, it was re-used later in other Fox productions. It’s vigorous as a flash flood, with the mass of riders galloping right at the camera and stuntmen doing really risky falls amid the tumult. The 2nd-unit director for this rowdy feat was Otto Brewer, among whose credits was the massive Foreign Legion battle in Under Two Flags. If you want to skip the twaddle and head for the rumble, the action starts around minute-55. Charge! 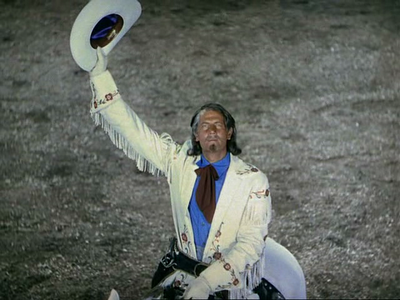 * Unsentimental director Wellman was unhappy with most of the result. Writer Fowler convinced him with ” You can’t kill any of these wonderful heroes that our kids…and everyone else, worship and like. And that’s what we’re doing. Buffalo Bill is a great figure, and we cannot do it.” They got plastered and tossed their script, a page at at a time, into a fireplace. Wellman recalled they “burned up three months of the most wonderful work I’ve ever done with a writer in my whole life…he was right.” About the crippled boy and his salute from the stands, Wellman offered “I turned around and damn near vomited because I think that’s the fakiest thing I ever heard.” One of the writers that refashioned Fowler’s original was Æneas Mackenzie, who’d done the deed on Custer for They Died With Their Boots On and later owed gibberish a debt over The Ten Commandments. 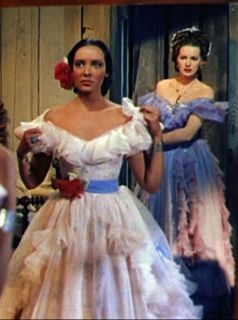 O’Hara didn’t care for the film either, apart from the photography and the battle scene, and in her autobio she rather curiously wrote “I didn’t feel McCrea was tough enough to play the lead in a western.  He was a very nice man, a good actor but not rugged like Duke or Brian Keith.” Curious, in the light of McCrea having made five westerns before this and more than two dozen after (his friendly competitor Randolph Scott logged at least sixty-five). McCrea’s two bits worth: “The minute I got a horse and a hat and a pair of boots on, I felt easier. I didn’t feel like I was an actor anymore. I felt like I was the guy out there doing it.”

Lastly, for a bookend farce, cynics who eschew homework in favor of polemic can wallow in Robert Altman’s spit-in-eye to the Bicentennial, the 1976 fiasco Buffalo Bill and The Indians, or Sitting Bull’s History Lesson. It’s one of the handful of movies I ever walked out on—or peeled-out on, since it was at a drive-in. In the parlance of the Old West, it was, well…horseshit.

One thought on “Buffalo Bill”