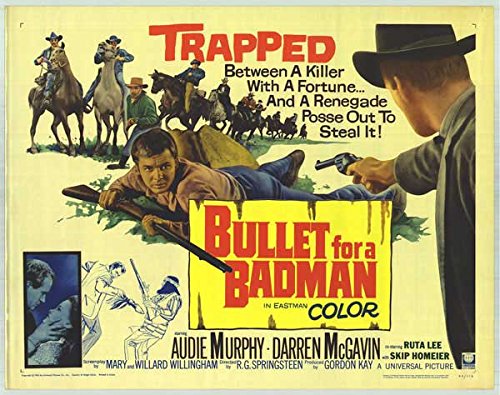 BULLET FOR A BADMAN, a small-scale 1964 western time-filler with a decent cast and scenery, went un-noticed at the time, wrapping reins around post #111 for the year with a shy gross of $1,400,000, enough payroll at least to profit from the equally modest production cost of $500,000. One of three lower-case genre items Audie Murphy ground out that year, it fared somewhat better than the tired Apache Rifles and knockoff The Quick Gun, likely because it was directed with proficient pep by the prodigious B-tamer, R.G. Springsteen. *

An outlaw (Darren McGavin) attempts a bank heist with the bonus of hoping to kill his old buddy (Murphy) who has married McGavin’s ex-wife and adopted his son. Murph leads the mixed-motive posse after his old pal, and dubious loyalties change back & forth as the casualties mount. 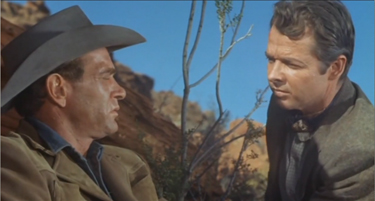 Kind of thing to watch while lying on a couch waiting to head to the airport and a 20-hour trip. Several things bolster the 80-minute tale. The posse is stocked with pros: Skip Homeier, George Tobias (unusually nasty for a change), Alan Hale Jr. (during filming he got word he was hired for Gilligan’s Island) and Edward Platt (busy in ’64, two movies and 12 TV gigs). Also on hand are sexy Ruta Lee, Beverley Owen, Mort Mills, Ray Teal and Bob Steele.

Springsteen stages some fairly relentless action, violent for the time, with Audie and Alan having a rowdy knock-down, drag-out fight and Lee being summarily and surprisingly dispatched. It looks good thanks to cinematographer Joseph Biroc, who gets some good licks in on locations in Zion Natl.Park and Snow Canyon State Park in Utah.**

* “Bud” Springsteen started working in Hollywood in 1920 as a wardrobe assistant. He was 16. He climbed the ladder to 2nd Unit and Assistant Director until 1945 and his first full credit as Director, a 56-minute ‘Red Ryder’ western with ‘Wild Bill’ Elliott entitled Marshal Of Laredo. 97 credits followed, most of them westerns. Gotta admire these titles: Vigilantes Of Boomtown, Son Of God’s Country, Singing Guns.

His last time at bat, a 1970 release, the actioner Tiger By The Tail, has a neat cast: Christopher George, Tippi Hedren, Dean Jagger, Charo (debut!), Glenda Farrell, Lloyd Bochner, Skip Homeier, Alan Hale Jr., John Dehner, R.G. Armstrong and Burt Mustin. Anybody see this? One doubts it’s any threat to Becket, but hey, Tippi Hedren and Charo, both in bikinis, and Chris George in a brawl in a Mexican bordello?—sounds like buttered popcorn time to me. 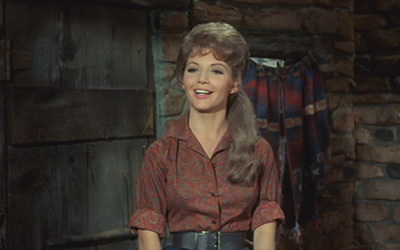 ** If Springsteen arrayed some gnarly fights, his ace cameraman made it all look good. Assignments ranging from classics (It’s A Wonderful Life) to schlock (Confessions Of An Opium Eater), solid craftsman Joseph F. Biroc ran the gamut in 164 credits. A favorite of director Robert Aldrich (they did 16 pictures), Biroc tallied eight jobs in ’64, including Ride The Wild Surf, Viva Las Vegas and Hush…Hush, Sweet Charlotte. He also filmed the concentration camp at Dachau and the liberation of Paris in 1944. A few of his contributions: Blazing Saddles, Superman, The Flight Of The Phoenix, The Devil At 4 O’Clock, The Towering Inferno, Forty Guns and Bwana Devil (the first 3-D movie).