LUST FOR LIFE —–Vincent van Gogh, ignored while he lived, selling only one painting out of 2,100 pieces of work, was not well-known beyond art circles in Europe and hardly at all in the U.S until Irving Stone’s 664-page biography, after 17 refusals, was published in 1934. Doubleday promptly sold 400,000 in hardcover.  Another 4.5 million went through book clubs, and a paperback edition rang up 2 million more. This 1956 adaptation, written by Norman Corwin, directed with flourish by Vincente Minnelli, was filmed in Belgium, the Netherlands and France, with cinematographers Russell Harlan and Freddie Young doing evocative justice to the actual locales the tormented artist recreated in his visions and suffered at with his demons. It’s also—a better or worse situation—a keystone in the acting career of Kirk Douglas.

Bearded and with hair tinted reddish, Kirk at 39 was a dead-ringer for the self-doomed Vincent, and he threw himself into the part with even more than his usual considerable energy. Reviews at the time were enthusiastic, and he was a favorite to win the Oscar for Best Actor, his third nomination after previous dibs for Champion and The Bad And The Beautiful (also by Minnelli). But a newcomer with equal dramatic flair, Yul Brynner, took the gold for The King and I, a more charming character in a happier film. Audiences did not turn up sufficiently to make this a hit; it only came in 69th place for the year. Costing $3,227,000, a gross of $4,600,000 left M-G-M posting a loss of over $2,000,000.

The Dutch artists intensity (or madness) can’t help but summon theatricality, and that’s where Douglas’ performance suffers in a retrospect appraisal: it’s practically a manual for mastering a Kirk Douglas impression, with some Big Anguish Moments and Passionate Painters Arguing Scenes veering off the artistic scale from portrait to parody. We like our Kirk as much as the next Spartacus, but his Vincent sketch too often feels like a skit from Frank Gorshin. *

Along with a tip of the easel to the emotions-churning star, the Academy Awards jury gave co-star Anthony Quinn (another Play It Big favorite, 40 here) the trophy as Supporting Actor, for his brief but fiery interpretation of the restive, quarrelsome rogue Paul Gauguin. The intelligent screenplay was nominated, as was—no surprise—the Art Direction (an ironic loser, considering, again to The King and I ). Quinn’s good, and the win (his second in the category, with Viva Zapata! ) helped push him into headliner roles after years in support harness.

The most convincing acting in the film is done in a quieter tone, by the decidedly non-flashy James Donald as Theo, Vincent’s loyal brother and lifelong champion. Mostly known today for his later sturdy work supporting The Bridge On The River Kwai and The Great Escape, Donald has perhaps his best all-round shot here and brings a needed counterpoint of grounding to the showoff ferocity of Douglas and Quinn.

Minnelli employed dozens of van Gogh’s works, borrowed and photographed or otherwise copied from museums to mesh with the scenes of Vincent/Kirk on the job in the locales that inspired the classic canvases. Miklos Rozsa composed the suitably exuberant score–to those familiar with his work, it’s readily recognizable as coming from him.

* Character torment was big in ’56—Trapeze, Attack, Baby Doll, The Last Wagon, Bus Stop, Written On The Wind, Tea And Sympathy, Moby Dick, Ransom!, The Man In The Gray Flannel Suit, The Last Hunt.  Most Shortsighted Award: left off the Academy’s lineup for Best Actor were the year’s two finest studies in suffering—James Mason, maniacal by medicine in Bigger Than Life and John Wayne, forever marked by ‘Scar’ in The Searchers. 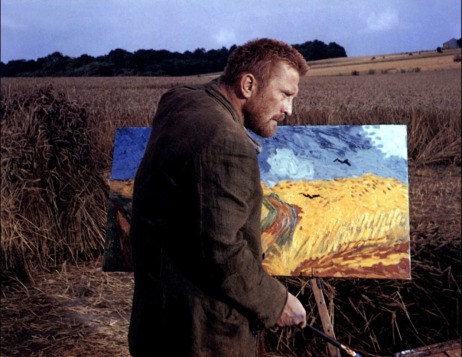