NIM’S ISLAND is a sure-fire 2008 ‘family’ film, a winner for kids, mostly little girls, taken from children’s author Wendy Orr’s 2001 book. It is, however, a fair ladle of twee for adults, with an overage of squealing and shouting. But its settings and trappings look snazz, it has Abigail Breslin’s adopt-me smile & giggle and Jodie Foster’s razor-sharp timing, pluck and charisma.

Momless 11-year-old ‘Nim (Breslin) lives with her dad ‘Jack’ (Gerard Butler) on an isolated island where he conducts marine biology studies and she keeps herself amused by conversing with a coterie of animal friends (a sea lion, a bearded dragon lizard, a sea turtle and a pelican) and by devouring ‘Alex Rover’ adventure novels. A storm has dad missing at sea. While Nim hopes for his return she defends their private paradise against an invasion by obnoxious tourists from Brisbane (she thinks they are pirates). E-mail exchanges bring help from San Franciscan writer ‘Alexandra Rover’ (Jodie Foster), creator of Alex (also played by Butler), who faces her extreme case of agoraphobia when she travels to the island to rescue Nim. By the time the 96-minutes wrap, we see who is really in need of rescue. Awww…. 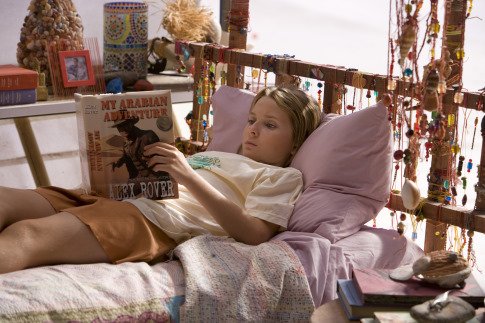 So-so effort was written and directed by the wife & husband team Jennifer Flackett & Mark Levin, who co-managed the script with two other writers, off the first of Canadian/Australian author Orr’s three Nim books. Reviews were mixed between the charmed and the churlish (hey, there’s a title for ya) and the $37,000,000 endeavor ranked 60th at the box office in ’08, grossing $100,076,000.* 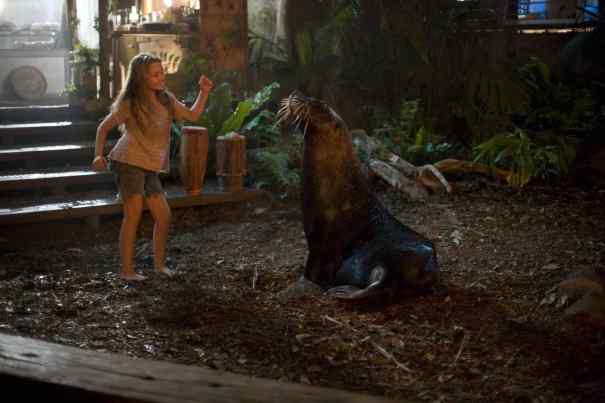 The target audience (primarily little girls, taking a wild guess) will eat it up, and their patient parents will at least enjoy the films visual design, with its bright colors and effects and the primary location shooting done on Hinchenbrook Island in Queensland, Australia. Part of the Great Barrier Reef Marine Park, it’s the largest island in the Reef. Nim’s pal ‘Selkie’ was played by a pair of Australian sea lions–“Spud” and “Friday”. Amusing moments mainly credit Breslin and Foster, while some illogical locale flubs fluster the casually alert map lover. **

Abigail Breslin, like Nim, 11 here, was one of the most likable, naturally gifted, and utterly cute child actors ever (now she’s grown-up, a different kind of attractive, still talented, with a long way to go), and her beaming smile and quick giggle win their weight in coconuts, but the plot schemata here has her yell so often and so shrilly that it gets wearisome. Mr. Butler may be a great bloke, and he clearly has a fan base, but his appeal eludes me—and there are two of him in this movie. Though as many reviewers knocked her as singled her out for praise, for me it’s Foster who delivers the goods in this flick. As she did in the earlier Maverick and later in Carnage, she displays a real flair for slapstick and her facial expressions and vocal inflections are whip-quick, minutely timed and honest, endlessly expressive. Some sniped this was somehow beneath her: to me, it just looks like she’s having a fearless blast being fearful. 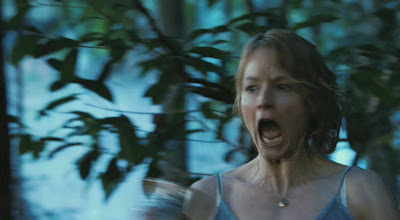 * In addition to the grosses, over one million DVD purchases (“Mommy, please get Nim’s Island, pleeeze”) in the US alone racked up another $21,400,000. Since Orr’s books (she’s written over 40) are printed in 27 countries, and the film made more globally than in the States, it’s obvious a good many more home disc sales could be added to the tally.  There was a 2013 sequel, Return To Nim’s Island, with a different cast, scattered release and less success. It starred Bindi Irwin, the then-15-year-old daughter of the late conservationist-showman Steve Irwin and an all-round entertainment personality in her own right.

** Not having read the books, I don’t know whether the glaring geography goofs stem from Ms. Orr (the island is a fictional place in a fictional, region-elective part of the Pacific) or the quartet of screenwriters, but somehow Foster’s air & sea trek take her through Borneo and then to Rarotonga in the Cook Islands before getting her ashore on the dream isle. Uh, Borneo (Kalimantan, Indonesia) and the Cook’s are thousands of miles in opposite directions from each other. The movies tacky ‘pirate’ tourists are tripping from Brisbane, only a mere 3,000 miles from Rarotonga, with New Zealand in the way. Furthermore, Rarotonga is depicted as primitive (jumbo jets land there), which the native residents were justifiably offended by.

The “who-will-know-the-diff?” script also has people referring to a tropical storm as a “Monsoon” when they should be calling it a “Typhoon” (precisely, a “Cyclone” since they’re supposed to be in the South Pacific). Sloppy stuff that: not everyone is clueless.

One thought on “Nim’s Island”