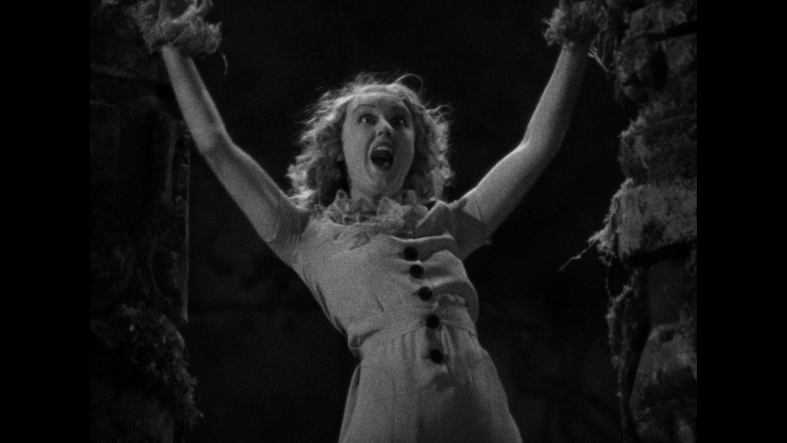 KING KONG knocked Depression-depressed audiences of 1933 back in their seats with giddy wonder, selling 50,000 tickets on its opening night twin debut at the spanking new  6,200-seat Radio City Music Hall and sister Art Deco showpiece, the 3,500-patron RKO Roxy.  It became the #1 hit of the year, and was re-released to success five times over the next two decades, pulling down $9,100,000 to redeem the nearly $672,000 that had gone into developing and shooting 104 minutes of groundbreaking fantasy adventure. Instant Americana, a lasting treasure of World Cinema, a priceless part of our prideful, preposterous cultural DNA. *

Daring wildlife action filmmaker ‘Carl Denham’ (Robert Armstrong) picks a destitute actress, the honest and hopeful ‘Ann Darrow’ (25-year-old charmer Fay Wray, securing immortality) to star in his next opus, somewhere in the East Indies end of the Pacific, near Sumatra. First mate on their freighter is ‘Jack Driscoll’ (brash and handsome 29-year-old newcomer Bruce Cabot), who soon falls gaga for Ann. Trouble is, when they arrive at their mystery location, its reigning inhabitant also develops an instant crush on Miss Darrow. Lives will be lost (in hideously cool fashion) before the best man  wins.

“Some big, hardboiled egg gets a look at a pretty face and bang, he cracks up and goes sappy!”

Sure, the learn-on-the-job acting is stilted and it takes a while to get revved up—38 minutes before much happens, 46 before Kong shows up. Yes, plot-logic holes are convenient (“let’s build a raft to get him to the ship!”) /all transport between capture and ‘stage debut breakout’ covered by simply skipping it, and the once-innovative effects have been long outshone, since-refined to essential perfection. But in the very artificiality of those outdated (still-magic) stop-motion special movements, detailed matte paintings and dream-hazy atmosphere, there is a creep factor rarely present in today’s flawless, computer-guided imagery. It boasts tinge of the Primeval that was still possible to uncover back then, reminding us of the timeless natural wonders currently being destroyed before our very, way-too-jaded eyes.

“We’ll give him more than chains. He’s always been king of his world, but we’ll teach him fear. We’re millionaires, boys.”

Once our hairy hero clomps into view, things are off on a comet of thrilling action set-pieces for kids of all ages, as ape-absconded Ann’s rescue party dwindles from gruesome attacks by a Stegosaurus (love that spiky tail), a Brontosaurus (going off his veggie diet), and falling off a log (‘all shook up by The King’).  Kong himself dukes it out with a Tyrannosaurus (screeching like a puma), a Pleisiosaur and a blonde-bound Pterodactyl.  Further ticked, he makes mince-mush out of several panicked villagers before one of those handy fast-acting “gas bombs” renders him fit to be trussed, shipped and shackled to a new life in Manhattan. That proves a short but active one: pummeling an elevated train, literally ‘dropping’ a girl he doesn’t like, then going full-tourist on the Empire State Building. Temper notwithstanding, you can’t say the Big Guy didn’t have class: he took a fall for a dame.

Fay recorded all her screams in one exhausting session. Seeing and hearing them, she thought they were distracting and excessive. True, but you can’t argue they’re not also the most famous shrieks of all time. Lung-power to the side, her quiet moments with Cabot display a soft, breathless quality both sexy and endearing. Can we also say “nice legs” and not be sued today (by someone who doesn’t have them) ? In her autobiography, On the Other Hand, Wray recounts the producer said he planned to star her opposite the “tallest, darkest leading man in Hollywood”. She figured that meant Clark Gable!  After her death in 2004, the lights of the Empire State Building were dimmed for 15 minutes in tribute.

Sharing producer & director credits, Merian C. Cooper and Ernest B. Schoedsack employed sets left over from their The Most Dangerous Game (also featuring Wray and Armstrong), and models made for a shelved project entitled Creation. The giant wall was refashioned from the silent DeMille epic The King Of Kings. Willis O’Brien supervised the marvelous stop-motion animation. So much information is available elsewhere about how the assorted effects were designed, arranged and blended that we won’t burden you with it here. Okay, just one tidbit: of the various-sized models for Kong, the full-scale mockup of his face was seven feet wide, accommodating 10-inch teeth and foot-diameter eyeballs. It used 30 bearskins and required 85 motors, operated by six men.

The images of that wall, the swamp, his mountain lair and the battles Kong has with the other creatures are truly remarkable achievements. A giant gorilla climbs the Empire State Building! Holy cow, Kong actually chews on people! Keen!

Mood and movement were greatly enhanced with music. 45-year old Viennese transplant Max Steiner had already worked on 37 films, as far back as 1916, but this was the score that put him on the map. Unlike flick music before it, this marked a significant change in the history of that often crucial element of the medium.  Kong’s soundtrack was the first feature-length score written for an American “talkie”, the first major Hollywood offering to employ a thematic score rather mostly borrowed background music, the first to budget-up and wheel out a large orchestra, 46 strong, for Steiner’s Wagnerian leitmotif creations.

Scripted by Ruth Rose (Schoedsack’s wife) and James Creelman, though Cooper had the original idea. As it was, merging “Beauty and the Beast” with jungle adventure (a popular vein in the day), mixing simians and prehistoric reptiles with fighter planes and machine guns, it married a number of sure-fire elements. The result was a cinematic muse-fount that’s never stopped geysering, both visually, in terms of ever-evolving technique, and thematically, in light of how many different (and screwy) ways people invent to interpret it. **

Though it was the years biggest success, the newly-formed Academy Awards crowd ignored it, setting the template for decades of sneering at fantasy films. They—and critics, The New Yorker deemed it “ridiculous”—only overlooked not merely the years best, most original and exciting movie, but easily one of the most influential pictures ever made. With Frank Reicher, Noble Johnson, James Flavin and Victor Wong.

* You can’t keep a great ape down. Nine months on, some kind of Skull Island mating process (thankfully not involving Ann Darrow) sired Son Of Kong, but that feisty little tyke only monkeyed up to 96th place, gathering $900,000. Remakes and ripoffs followed, some roared, some gibbered: the excellent Mighty Joe Young, lame Konga, daffy Toho volleys King Kong Vs. Godzilla (itself remade) and King Kong Escapes, the lambasted 1976 version (that at least gave us Jessica Lange) and the wondrous 2005 megahit. The action-packed Kong: Skull Island romped more recently. No doubt, furry cousins wait in the trees, assuming we man-apes don’t do ourselves in first (odds not on our side). Some would cry Sacrilege, but while acknowledging Grampa Kong’s attributes, impact and place in hominid history, I much prefer the Peter Jackson showstopper. Dump me in the spider pit… 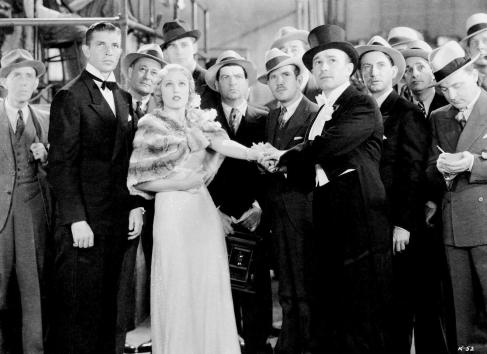 ** The fall-down-roll-over interpretations of what Cooper & Schoedsack’s Ape-courts-Maid adventure really meant are numerous as bananas and intellectually fruity enough to gag an orangutan. Books like Cynthia Marie Erb’s “Tracking King Kong” and scads of pontificating movie critics cite sexism, racism, colonialism and isms you did not know existed to prove that some people can ruin a picnic faster than yellowjackets. Wildmen real-life adventurers as well as filmmakers and business partners, Cooper & Schoedsack denied their whopper was about anything more than a good time in the dark (read up on these fascinating characters). Some posit that R-K-O and executive producer David O. Selznick were inspired by the box-office success of Ingagi, a notorious pre-code farrago from 1930, blatantly suggesting native women mating with a gorilla. I recall watching the 1976 version with my sister, her commenting in disgust “I suppose he’s going to rape her now”, a risible presumption that I confess had never entered my oaken head (figuring he was most likely going to have Ms.Lang for a one-sided dinner).  Apparently one person’s roller-coaster is another’s retch-caster. Some of the undercurrent theories are so outlandish you’ll roll in aisles like a chimpanzee. “Why did you eat lunch?” Uh, latent fear of starving?

What do we think? Crafty and naive, sentimental and violent, posturing and lonely, enslaved by technology and doomed by greed: King Kong is all of us. “It was beauty killed the beast.”