MILLIONS, nearly twelve of them, floated down onto this utterly charming 2004 Christmas fantasy-comedy, written by Frank Cottrell Boyce, a gentle, witty, beautifully cast meditation on the elasticity of ethics, the reaches of soul and the blessing of imagination. And saints! And money…

Having constructed a cardboard play-fort beside railroad tracks near his new suburban neighborhood, 7-year-old ‘Damian’ (Alex Etel) thinks it’s literally Heaven-sent when a gym bag stuffed with money bounds through the roof. Sharing manna and secret with older brother ‘Anthony’ (Lewis McGibbon), not telling their widowed Dad (James Nesbitt), the boys begin to find uses for the lucre. With 265,000 English pounds on hand (er..oi…roughly $732,000 today if you monkey with inflation), sweet-faced and dreamy Damian—who vividly imagines and converses with famous saints—wants to help “the poor“, while angle-sharp Anthony looks more motivated for profit. Triple complications arise: the Pound is about to switch to the Euro, the lonely father gets interested in a cheerful new lady and the thief who originally stole the stash wants his haul back. 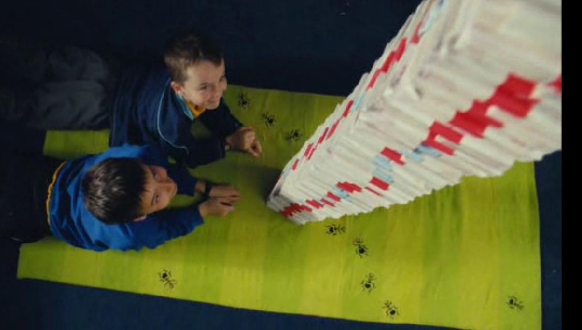 “I thought it was from God… who else would have that kind of money?”

Lovingly directed by the continually inventive Danny Boyle, who followed up his chilling horror fave 28 Days Later with this 100% about-face into warmer and more hopeful home territory, albeit one with some loss, threat and suspense to flavor the tasty confection. Among writer Boyce’s humanist-imbued screenplays: Welcome To Sarajevo, Hilary And Jackie, The Railway Man and Goodbye Christopher Robin. Boyle keeps Boyce’s very funny and touchingly thoughtful script running tight-knit at a flab-free 98 minutes, makes smart use of fun special effects, has a keen cameraman in Anthony Dod Mantle and picked a full monty winner of a cast. *

Alex Etel was 11 during the shoot, but small enough in frame and soft enough in features to fully convince as a lad of 7. His naive, guileless, trusting innocence as Damian makes such a refreshing take on the usual smart-bum formula-packaged brat trotted out to spew quips and break stuff.  Boyle also wisely keeps the sentiment element under wraps so that doesn’t cloy things up either. McGibbon, 12, makes likewise amusing company as the more skeptical and pragmatic big brother. Nesbitt is excellent as the alternately pleased and perplexed father, here a fully rounded fellow so as not to be just a dodo parental foil for the kids. ‘Dorothy’, the lively new woman who brings some solace to Dad, is aced over with doe-eyes and razor timing by vivacious Daisy Donovan. The quiet, suitably menacing Christopher Fulford is the bad guy of the piece. Smiles, chuckles and laughs aplenty, with well-handled moving moments placed just right in the blend.

I watched this mostly neglected jewel back-to-back with a renewed look at another Christmas-themed comedy, Home Alone: you couldn’t match-up a more telling juxtaposition. That crass “classic”, “Holiday family fun”, with its obnoxious characters and witless parade of vicious stunts, grossed forty times as much as the good people, kind hearts, social observation and genuine spirit of Millions.

* Boyle:  “It felt very personal, even though it’s not a script I wrote. Frank and I were both brought up very religiously but we were both very imaginative. It was probably a reaction to the excesses of 28 Days Later… to find a different mood, a different tone from that. The most obvious scene in it that was missing was, there was never any scene with his mom, and I said to Frank, ‘You’ve got to write a scene with his mom.’ He didn’t want to but he wrote this scene and it’s the most beautiful little scene. You learn sometimes that the most obvious fucking thing is the thing we need.”   Amen, Brother Boyle.

Boyce: “I’ve always loved the saints very seriously. St. Francis is one of the greatest people who ever lived. But I also like them in a camp way. A lot of them were nutters like Joseph of Copertino who could levitate. The Celtic ones were always getting into scraps. These are amazing stories full of heroism, eccentricity and bloodiness. The saints gave their names to our towns, hospitals and schools, yet people have forgotten them.”