Written & directed by venerable stage showman George Abbott (he lived to be 107, so someone bargained wisely), with Stanley Donen sharing in the direction, and devilish Bob Fosse doing the choreography.  Most of the cast from the play was brought along, but they caged box-office bets by replacing Tony-winning stage lead Stephen Douglass with teen heart-throb Tab Hunter as the vexed, hexed ‘Joe Hardy’.

Middle-aged baseball loyalist ‘Joe Boyd’ is so desperate for his perpetually losing Washington Senators to beat the Yankees (whose roster in ’58 included Yogi Berra, Whitey Ford and Mickey Mantle) that he agrees to sell his soul to the Devil, when The Big D appears in the glib form of a fella named ‘Applegate’ (Ray Walston).  Applegate transforms Joe into the youthful, prodigiously athletic Joe Hardy, who, showing he can effortlessly bat like Hercules, is signed by the Senators trainer, ‘Benny Van Buren’ (Russ Brown). Joe leads the team on a winning streak but Satanic minder Applegate has a literally Hellish plan. To help him keep Joe on the yoke, Applegate unleashes his conscript vixen ‘Lola’ (Gwen Verdon) and “Whatever Lola Wants, Lola Gets”.

Abbott deleted five numbers from the play, which was probably just as well, keeping the running time taut unlike most overloaded musicals of the period; a frisky 111 minutes punctuated by a dozen fun tunes, including, besides the Lola showstopper, “You Gotta Have Heart” and a couple of wild dance routines.

Hunter was busy that year, on screen with the excellent western Gunman’s Walk, and the disappointing Lafayette Escadrille, as well as some notable TV gigs. At 27, Tab was still basking from the previous year, when his #1 pop cover of “Young Love” charmed up 1,000,000 singles. He felt Abbott cut him rather adrift in the cast, who’d already honed the material for 1,019 performances on stage, but he handles the part nicely. Russ Brown makes an amusing rascal (he also showed up that year, with Walston, in South Pacific). Adding to the fun is Jean Stapleton ,33, in her first feature credit, that great voice warming up for long-delayed Edithian immortality.

Bright cinematography is courtesy Harold Lipstein, and Ray Heindorf was Oscar-nominated for the Scoring, but the show is truly owned by the special talents of Ray Walston and Gwen Verdon.  A wound-up ball of razor timing and mischievous energy, Walston’s unique delivery tickles his line readings with impish glee, a droll, insinuating purr, yet he also keeps just enough of a sharp edge to remind us that wisecracks aside he’s deep down the dead serious emissary of Hell.

Verdon, 33, had danced, unaccredited, in a dozen films (scampered exotically in David And Bathsheba) and—our loss—after this would not show up in another for 20 years (as one of the star-studded guest crowd at the end of the unfortunate Sgt. Pepper’s Lonely Hearts Club Band).  In the role she’d ever after be identified with, as camp-vamp Lola, the svelte, fire-tressed Gwen is a kicker for the record books. With a smoky voice, moves to die for and legs to duel over, Verdon isn’t a classic beauty in the usual Hollywood manner as much as just effervescently cute and scorchingly sexy, whether prancing catlike, writhing like a viper or twirling like a whirlwind. Along with tempting Tad, she teams with Fosse for a sinuous sizzler, “Who’s Got The Pain” (they married two years later). Later there’s another madcap group jive called “Two Lost Souls”. 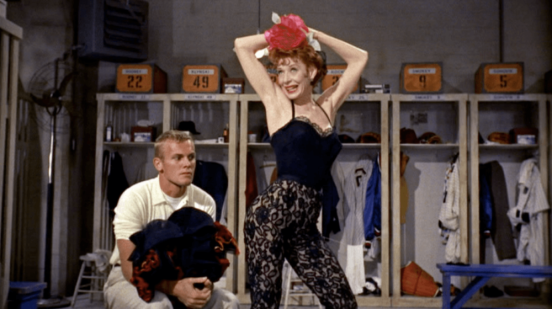 To quote the lady: “Sex in a dance is in the eyes of the beholder. I never thought my dances sexy. I suppose that’s because I see myself with my face washed, and to me I look like a rabbit.”  Amazing to see her move with such feline, seemingly boneless grace when you consider that as a child she was cruelly taunted as “gimpy” because she suffered from rickets and had to wear corrective boots and braces to straighten her limbs. She showed ’em. No one cut moves like Gwen Verdon. 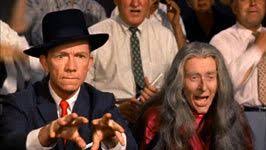 In a year dominated by South Pacific and Gigi, Damn Yankees wasn’t a smash hit, but it made a respectable showing at 30th place, grossing $7,400,000. With Shannon Bolin, Robert Shafer, Rae Allen and Nathaniel Frey.