PASSENGERS, written by sci-fi & fantasy maven Jon Spaihts, took nine years to get off the ground before it finally bowed in 2016, directed by Morton Tyldem. $150,000,000 was expended to give this spectacularly visual, yet personality-intimate sci-fi survival saga an eye-dazzle sheen. The luxurious design helped coax complementary, situation-attuned  work from the minute, well-meshed cast. Technicians and performers went up the mark as the conundrum storyline tasks their assorted gifts in testing logic and practicality vs. morality and need, heart over hurt, the finite against the infinite.

In the future…the “unsinkable” Starship Avalon experiences damage on its 120-year trip to colonize a planet. The life-support pod of just one of the more than 5,000 pilgrims and crew opens up, giving mechanic ‘Jim Preston’ (Chris Pratt) major problems to solve since he’s sprung from hibernation 90 years too early. With only an android bartender (Michael Sheen) for a semblance of company, after a year alone, the desperate space-Crusoe makes a calculated risk in taking the ethics-variable choice to force open another pod. This one releases writer ‘Aurora Lane’ (Jennifer Lawrence), who’s not only attractive (like that’s a hard call) but vibrant, fun and smart. Now they are Two, with glib, but mechanically honest barman ‘Arthur’ serving as the unwitting 1/2, holding Jim’s secret, self-saving sin safe from Aurora—for a while… 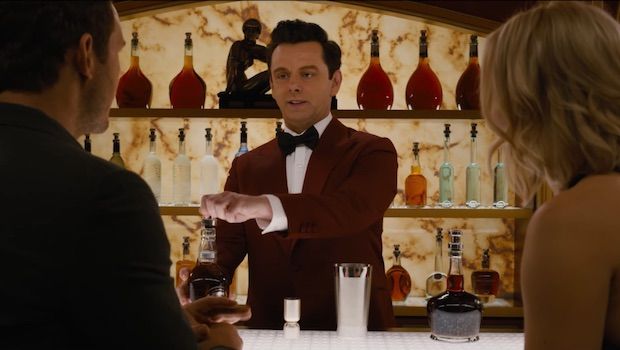 Detailing more plot-reveals is not something we favor on this Blogship Enterprise; just watch this imaginative, engaging and thoughtful 116-minute voyage and find out. You don’t have to be a Black Hole-absorbed, quantum-leaping physicist with one dork friend and a spare brain in your airlock to assume there will be complications and fireworks moral, romantic and having to do with “the core”. Go with it. Do you take notes when you ride a roller-coaster? No doubt science dweebs and the emotion-dry will eagerly pop bubbles over “how that couldn’t happen”, adinfinabarfdom. Do these sad dachshunds realize how little fun they are to be around?

And, verily, it didn’t get that much love from reviewers, who must’ve been on Surly Dial, or were grooming their places in the sputum line for the inevitable Jen-backlash (“How dare anyone so good, that cute, and this much fun get away with it? Let’s do an Anne Hathaway on her.”) Plus there was pre-buzz buzz-cutting over the likable Mr. Pratt’s collapsing marriage to adorable Anna Faris, breaking up on the heels of the production. The public paid little attention to sniping Huff-posters. Rather, they fed word-of-mouth where it counted, wallets taking the film to 29th place in yet another year jammed with effects-epics, grossing $303,144,000 around this troubled blue planet so many seem so eager to flee.  Good luck getting escape velocity. Let the rich bastards go: let’s hope they meet Predator. *

Down to Earth: Lawrence is without doubt a true natural, and Pratt is disarming. Sheen is always sharp (pulling off a robot role like this summons extra levels of subtlety). Also in the abbreviated cast are Laurence Fishburne, Andy Garcia (there for a few seconds and not speaking) and, doing a killer job as one of the phony hologrammatic sales-pitchers for the Starship’s parent corporation is—I don’t know— as Internet searches so far haven’t yielded her name, but–unless she’s a computer creation–she’s very good.

A wistful future allows for the spirit of adventure and the need for freedom to grow, spliced & diced into the corporate commercialization of desire that somehow foresees entailing unimaginable amounts of capital to spend on gigantic intergalactic vehicles. This last is where the super-duper crew given rein on art direction, set design and assorted top-this spacecraft stuff garner a big round of bravo’s for the seductive cosmos-piercing look of the Avalon‘s shell and the cruise-ship/deluxe-mall interiors, complete with Arthur’s retro bar (recalling The Shining) and high-fashion staterooms. The production designer was Guy Hendrix Dyas, whose stellar interstellar vision was gratifyingly Oscar-nominated, along with Thomas Newman’s aura-comforting music score. Lot’s to look at and drink in, and the sequence with the swimming pool losing gravity is a bona fide knockout. 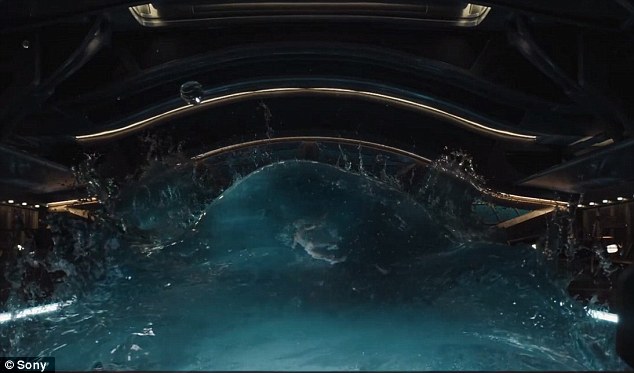 Idiot kneejerk clowns posing as film scribes/morals-minders attacked the “stalking” of Lawrence’s character by Pratt’s and some of her decisions as playing into Stockholm Syndrome. Sure, every time a writer or director has fictional characters make a move that fits within the boundaries of their story, it MUST also line up with All Currently Accepted Modes of ‘Correct’ Thinking. We gag, so as to spare you the reflex. Director Tylden’s view of the wheeze brouhaha over Jim’s gamble on waking Aurora: “I think most of us, faced with the same choice, would have done the same thing. Making a movie that leaves people room to argue about what they would have done – or could have forgiven – makes for fascinating storytelling.”    It’s, like…a moo-vee?

* Particular good company in ’16: The Wave, 10 Cloverfield Lane, The Jungle Book, Arrival, The Shallows, Rogue One. 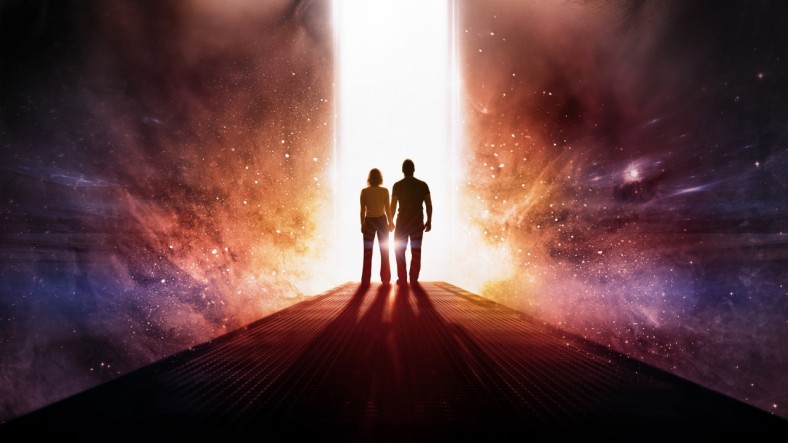