Hedley is vexed because prosperous, peaceful, bigoted Rock Ridge stands in the way of his land schemes, and those of his corrupt boss, imbecelic ‘Gov. William J. Lepetomane’. The dopey denizens of Rock Ridge (“the common clay of the New West. You know…morons“) are defended by a new sheriff, Bart (“Pardon me while I whip this out“), who is cool, laid-back and not eighteen but 1970s Black (Cleavon Little), a complexion convection that riles the good folks of this God-fearing hamlet. Bart’s ex-gunfighter deputy, ‘The Waco Kid’ (Gene Wilder), dazzles with his skill, once he sobers up. Complicating factors are the presence of leggy Teutonic saloon vixen ‘Lili Von Shtupp’ (Madeline Kahn) who vows Bart will “be like wet sauerkraut in my hands”, and an earth-shaking terror, the manchild ‘Mongo’ (Alex Karras), who not just realizes that “Mongo only pawn…in game of life” but vows “Mongo no go. Mongo stay with Sheriff Bart. Sheriff Bart first man ever whip Mongo. Mongo impressed. Have deep feelings for Sheriff Bart.”

Getting Warner’s go ahead to use $2,600,000 on the production, director Mel Brooks wrote the script in an anarchic free-for-all shoutfest with pals Norman Steinberg, Andrew Bergman, Richard Pryor and Alan Uger. Basically, they worked up “a Number 6 on ’em”, with Pryor giving enthusiastic support for crucial, controversial use of the n-word (“Without it, there’d be no movie”, Brooks said), essential to help mock racism and turn clichés on their head. Mel related “Blazing Saddles, for me, was a film that truly broke ground. It also broke wind … and maybe that’s why it broke ground…”  At any rate, it came down to beans, bawdiness and “bwass tacks“.

Like candy buckshot, gleefully ribald, vulgar, taste-optional and just plain silly gags fly in every direction, reaping giggles, snorts and belly laughs from not just cowboy clichés and the skewering of redneck racism, but tossing in nods to other genres, time periods and everything within reach, going so far as to have the climactic brawl break through the studio wall into the set of a fruity musical staged by ‘Buddy Bizarre’ (Dom DeLuise). Slim Pickens sets Buddy straight.

“Well, it got so that every piss-ant prairie punk who thought he could shoot a gun would ride into town to try out the Waco Kid. I must have killed more men than Cecil B. DeMille.” Brooks offered the part of The Waco Kid to John Wayne. Duke read the script, told Mel he laughed out loud but couldn’t star in a movie with that much dirty language. But, he said “I’ll be the first one in line to see it.”  Gig Young started the role but collapsed from alcoholism and Wilder deftly stepped in. 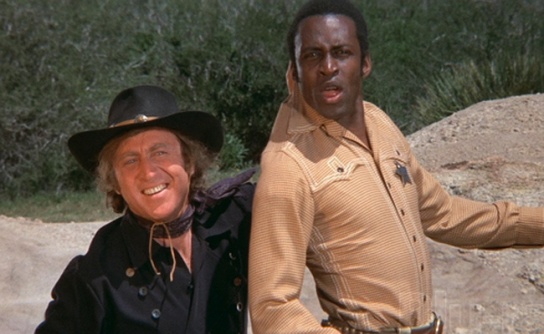 The preview for a dozen Warner’s bigwigs was a dead zone: the suits wanted to dump it without fanfare and take a loss. A second showing to 300 regular Warner’s employees went off like a rocket, and the studio ended up re-releasing the film a half-dozen times. Making $119,500,000 domestically, it was the #1 hit of  1974. So much for front-office wisdom. *

“Here I stand, the goddess of desire / Set men on fire / I have this power. / Morning, noon, and night, it’s dwink and dancing / Some quick womancing / And then a shower. / Stage door Johnnies constantly suwwound me / They always hound me, with one wequest. / Who can satisfy their lustful habits? / I’m not a wabbit.” The priceless Kahn’s send-up of Dietrich earned her an Oscar nomination for Supporting Actress, and noms also went up for Film Editing and that wacky title song (written by Mel, music by John Morris). Belting his heart out as he’d done for his previous hits, the immortal Frankie Laine wasn’t told it was a spoof; he did a good-sport encore at the Academy Awards.

“Would you like another schnitzengruben?”  Along with vamping Kahn, and the charm of Little and Wilder, the movie owes a tremendous amount to the oddball comedy team of Korman & Pickens. Harvey & Slim deserve a giant roadside statue with a picnic area, waterslide and rattler petting exhibit.  “Well, that’s where we go a-ridin’ into town, a-whompin’ and a-whumpin’ every livin’ thing that moves within an inch of its life.” Devotees know the rest…

Over 93 minutes,various citizens of Rock Ridge (all named Johnson) and assorted bad guys are played by David Huddleston, Liam Dunn, John Hillerman (‘Howard Johnson), Burton Gilliam (‘Lyle’, toothy thug assisting Pickens—a quote from Burt: “I got in the business to make money, so being typecast didn’t bother me. I know I’m never gonna be asked to do Shakespeare”),

George Furth (‘Van Johnson’), Jack Starett (‘Gabby Johnson’), Robert Ridgely (‘Boris’), Robin Hylton (‘Miss Stein’, Lepetomane’s secretary), Don Megowan, Ralph Manza (guy playing Hitler,”they lose me after the bunker scene“), and last but not least, Rick Garcia (“Badges? We don’t need no steenk-ing badj-es!“). Count Basie has a cameo, just on account of because. A total of 78 stunt people participated in the final assault on Rock Ridge and assorted environments. Among them were such notables in the fracas-field as Hal Needham, Richard Farnsworth, Terry Leonard, Red Morgan, Loren James, Chuck Hayward and Jerry Gatlin. “Does anybody have a dime? Somebody’s got to go back and get a shitload of dimes!”

* “I didn’t get a harrumph out of that guy.”  The Dishonorable Gov. Lepetomane (played by Brooks, who also showed up as a Yiddish-speaking Indian) gets his name from French legend Joseph Pugul (1857-1945) a one-man show whose talent was as the world’s most reknowned “flatulist”, or if you prefer, a farteur, or fartiste. We humbly direct you to man the keyboard and find out more about this wind-making magician.

Not hot air: during the shoot, Wilder pitched Brooks the idea for what would be their next project together, what would be Brook’s most accomplished piece as a director, Young Frankenstein. It came out later the same year and was #3 among earners. In 1974, it was good to be the Mel. 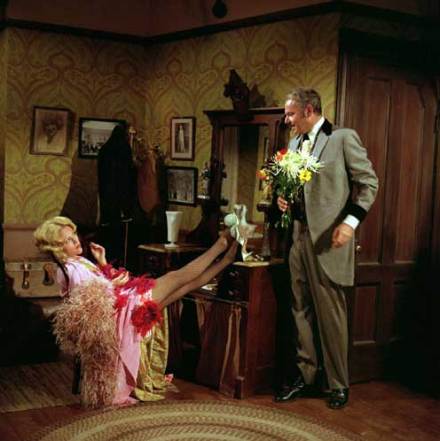 One thought on “Blazing Saddles”