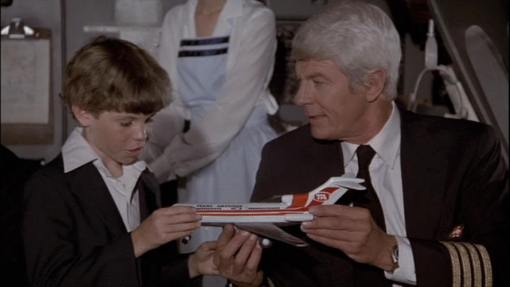 AIRPLANE! —–“Surely you can’t be serious.”   “Looks like I picked the wrong week to quit sniffing glue.”  “Joey, do you like movies about gladiators?”  “Cutter say ‘e can’t HANG!  “It’s a damn good thing he doesn’t know how much I hate his guts.” “I don’t know where I’ll be then, Doc,” he said, “but I won’t smell too good, that’s for sure.”

Lines from this slapped-together instant classic have become part of fill-in-the-pause banter around our wobbly orb since it first crashed radar screens back in 1980 (“route it into lake Michigan..”). Splitting the jobs of directing and writing among them, Jim Abrahams and the Zucker brothers, David & Jerry, threw everything at the fan (cue) in 88 minutes that had theaters shaking from convulsed audiences, who made it the 4th most popular film of the year, one that was a bonanza for comedies. *

“I guess the foot’s on the other hand now, isn’t it, Kramer?”  By now if you don’t know who ‘Ted Stryker’ and ‘Elaine’, ‘Capt. Rex Kramer’ and the curious ‘Joey’ are, well then “Do you know what it’s like to fall in the mud and get kicked… in the head… with an iron boot? Of course you don’t, no one does. It never happens. Sorry, Ted, that’s a dumb question… skip that.” 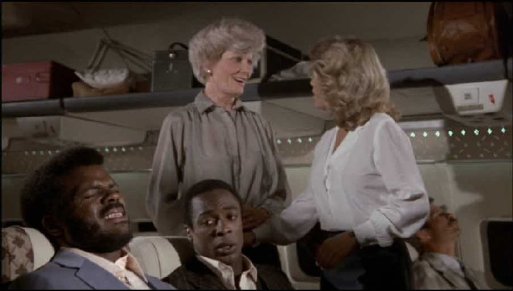 Blessed with perfect counter-intuitive casting, the cheerfully mock-serious, shamelessly silly, harmless idiocy coasted over whichever jokes didn’t work (I grimace whenever Stephen Stucker’s flaming air traffic controller ‘Johnny Henshaw’ horns in) by making sure the next one gets a giggle, snort or guffaw. Elmer Bernstein was clued in to the mood on his scoring. 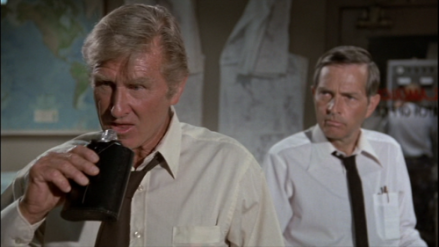 Robert Hays, 33, had done five years of TV jobs before landing this as his first feature (he married ‘The Runaways’ bombshell Cherie Currie–go Bob!). Julie Hagerty, 25, made her debut here. What can you say about Robert Stack, Lloyd Bridges, Leslie Nielsen and Peter Graves?  Salute some dudes who all had the chops, smarts and inherent sense of the absurd to lovingly play up a lampoon of the kind of terse dramatic roles they’d been associated with. It launched a whole new career phase for Nielsen, 54.

On board or waiting below: Barbara Billingsley (who knew June jived?), Kareem Abdul-Jabbar, Rossie Harris (“Joey, have you ever been in a… in a Turkish prison?”), Lorna Patterson, Kenneth Tobey, Ethel Merman, Maureen McGovern (the nun), James Hong (the Japanese general), Jimmie Walker, David Leisure, Jonathan Banks. 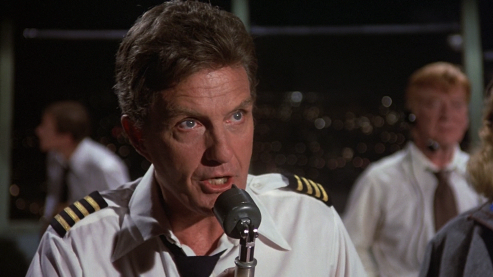 Abrahams and the Zuckers drew the inspiration—and much verbatim dialogue—from the 1957 drama Zero Hour!, written by Arthur Hailey. It put Dana Andrews, Linda Darnell and Sterling Hayden on an airliner stricken by food poisoning, and includes the immortal line “Our survival hinges on one thing – finding someone who not only can fly this plane, but didn’t have fish for dinner.”  The original film is actually not bad, if you can somehow dismiss association with Airplane!—but that’s nearly impossible.

“Striker, listen, and you listen close: flying a plane is no different than riding a bicycle, just a lot harder to put baseball cards in the spokes.” They only spent $3,500,000 to whip it up, and the grosses came back to finally tally $130,000,000. Two years later, Airplane II:The Sequel  had some laughs, not as many, cost four times as much and made 1/6 of the first. 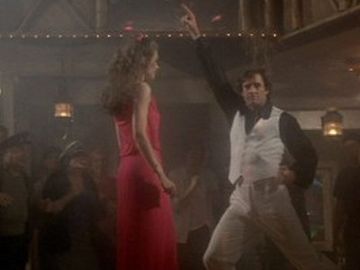 * Among the more than forty-five comedies of 1980 were such gems as Caddyshack, Used Cars, Melvin And Howard, The Black Marble and Serial, plus the likeable How To Beat The High Cost Of Living, 9 to 5, The Blues Brothers and Private Benjamin.