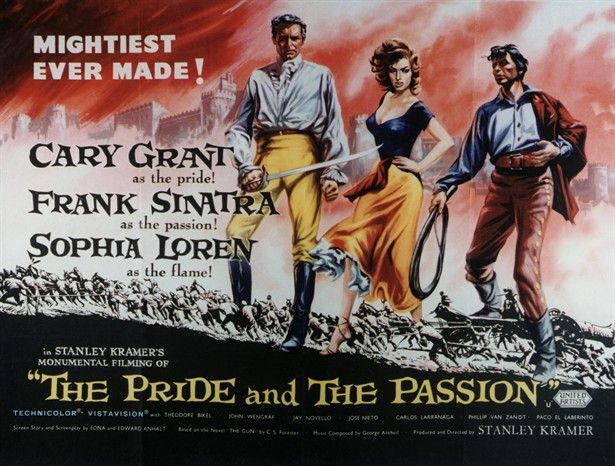 THE PRIDE AND THE PASSION  is a difficult movie for me to write about because I’m prejudiced: I really like it. Judging by the lore on the production and decades of unceasing disparagement from critics, in print and now snarking on the Net, it seems I’m nearly alone in my affection and defense. This big-budget epic, with three iconic stars and a famous director (along with over 9,000 swarming extras) is a great example of what I like to call—and we think we’ve coined this one—an “orphan movie”, one nobody claims. Two of the leads were unhappy with their roles and performances; the director, who also produced, fielding migraines with both jobs, would get apoplectic talking about it.  Awards were absent, though it certainly deserved an Oscar nomination in one category. Reviewers sneer, biographers of the actors dismiss it—you get the point.  Certainly the film has issues, but it’s undeserving of the smug, pile-on, overkill bad rap. My personal nostalgic and emotional tie-in to this 1957 drive-in favorite follows at the end of this likely lonely and unashamedly defiant ode.*

Spain, 1810. Their army shattered by Napoleon’s invasion, the people fight back as guerrilleros.  Their peasant leader, shoemaker ‘Miguel’ (Frank Sinatra), with the help of British artillery officer ‘Anthony Trumbell’ (Cary Grant), vows to strike a blow at the French-captured city of Avila. The stubborn joint commanders, keen to battle Bonaparte, are at odds personally; fueling their feuding is that Miguel’s woman, ‘Juana’ (Sophia Loren) falls for the handsome Englishman. Their wounded pride and smouldering passion are tested by the demands of the unofficial 4th star—a really big one–the 42-foot-long, 7-ton cannon which they drag and push across rivers, up and down hills and thru French blockades for 200 miles to breach the medieval walls of Avila. The romantic and episodic 132-minute spectacle builds to a suitable VistaVision ker-boom climax. Yes, I cite VistaVision, Sophia Loren and ‘ker-boom climax’ in the same paragraph and am passionately proud of it.

French General: “How these Spanish love their moment of truth – to drench the ground with their blood – to die. Why?”  His Colonel: “Probably because it is their ground, General.”

Ambitious producer Stanley Kramer put together this mammoth melodrama as his second go at directing. $3,700,000 was expended shooting for 16 weeks in Spain, posing his stars and massing his extras against locations in and around Avila, Madrid, Santiago de Compestola, Segovia and Toledo. The writing team of Edward & Edna Anhalt fashioned the script by taking liberties with C.S. Forester’s nifty 1933 novel “The Gun”, a 300-page item written before his fame with the ‘Horatio Hornblower’ tales. Kramer had earlier managed Sinatra—barely—on the sappy but successful Not As A Stranger, but Frank’s cavalier attitude and disdainful conduct on this job made for major pain. He even split before shooting was finished (leaving a discomfited Cary to play scenes to an absent co-star) and caused a furor by unveiling a “Franco is a fink” banner off his hotel balcony, which did not please the local press—or, we assume, Spain’s Generalissimo dictator. Grant, 52 and looking sensational, meanwhile had a mad thing for the 22-year-old hydrogen bomb Sophia. Sparks flew like cannonballs, but loyalty—and innate wisdom– saw her remain with her mentor Carlo Ponti.

Initial critical response was mixed; applause for the spectacle, shrugs over the casting. At 24th place among earners for the year, while not the blockbuster Kramer intended, it made money, $8,600,000 in the States, more abroad, but continually gets dinked as a box-office flop (lazy pup reviewers too busy being snippy to bother with homework). Sinatra would always disparage it, Grant felt ill-suited (literally and figuratively) and Kramer was so pissed at Frank that he would boil. So what gives? And why Me?

On the debit side, Sinatra’s performance, reflecting his boredom with the locations and his general surliness, is half-there: he’s all right in some scenes, flat in others. Grant is always cited as “ill-at-ease”, but he works fine for me here—if his performance suffers it’s from having to handle mediocre exposition and some flaccid dialogue in the love scenes (that doesn’t affect the kissing business any). The pace would have benefited from cutting (I’d dump the whole church-procession segment) and while the sequence where a pontoon bridge blows up with a regiment of French troops on it is eye-catching, it’s also darned unlikely in its too convenient results. Half of the stunt work in the numerous action scenes is well done, but there’s also some distracting sloppiness from a few of the extras who don’t seem to know quite how to “fall down like you’re hit”.  Even with a fair amount of flaws, there’s enough ‘Big Movie For The Summer of ’57’ aura that resonates to counterbalance (for this fan) the gratuitous smirks of posterity (posterity often smirks gratuitously, look it up).

What’s Cool? Glad you asked. Kramer aims at a war movie told from the viewpoint of common people instead of military types: the thousand-generations of peasant in me responds. Loren, who learned English on the double for this job, does better than the more experienced men—her emotional honesty, earthy sensuality and stunner form—she’s basically ravishing—are charge-that-wall and-perish-for-her (we mean Spain) enticements.

En route to the thunderous finish are a half-dozen action scenes to punctuate the quarrels and clinches; these include a neato rain of fireballs down a hillside on a French encampment (later appropriated by both Spartacus and Troy) and a wild bit when the runaway cannon roars down a hill through a forest, decapitating trees, whomping through a stone wall, barreling across a field right into the camera, while sheep scatter (with a fun insert shot of a protesting lamb topping it off). It’s a great have-you-seen-this? showstopper to impress captive friends with.  ‘The Gun’—several props of different sizes were constructed— is suitably awesome: it speaks for itself. The final massive, stirring assault on Avila looks like it has half the population of Spain in play.

The impressive effects of Avila’s walls being pounded to smithereens were done up by Willis Cook (who slaved uncredited on such films as The Beast From 20,000 Fathoms; he helped arrange the cool volcano for The Devil At 4 O’Clock).

Best—and what makes many of the films moments work as well as they do and papers over most of those that don’t—is a magnificent music score from George Antheil.  A fascinating, brilliant, difficult character, the avante garde radical Antheil, the self-styled “Bad Boy of Music” in his day, hit his film career zenith with this highly-regarded score, one of his last (he died, aged 58, in 1959). Essentially it’s a symphony: his stirring main title surge that suggests the essence of Spain (he works in some ‘Bolero’), the powerful driving theme for The Gun, the lusty flamenco track and the lovely shadings for Juana in the love scenes make up one of the best—and least known—soundtracks of the 50s. Antheil got what Kramer and his writers were aiming at, and whether they hit the mark or not, he transposes their hopes for the epic into an accompaniment that has sweep, grandeur and intimate longing. Whatever else the film strives for, Antheil’s music is a signal, stand-alone success.

Plus, when Cary and Sophia have their final makeout scene, beside that giant howitzer, before those doom-looming walls of Avila, with Antheil’s dramatic, unapologetic heart-notes, it’s obvious they’re not just ‘getting into character’.  For this yet-hopeful romantic it speaks to a whole bygone era of summers at the drive-in, with absurdly attractive demigods, 50-feet-high, dispensing passion on the proud canvas of a long-gone prosperity. It’s not supposed to be Citizen Kane: it’s meant to evoke emotion. You don’t feel some of that? Sorry for your loss.

*  ¿Por qué esta película, Marcos?   They showed this on ABCs Sunday Night Movie in 1962. I clearly recall that when it was rerun in the late summer, I would run outside to play on the front lawn during commercials, goofing around with my neighborhood pals, chasing moths in the warm twilight.  I recreated the big attack scene on my bed using my horde of 1/72 scale toy soldiers, and a larger size cannon from my Civil War set, then made Avila’s wall out of pieces of wood—arranged so my “cannonballs”(I used screws) could knock it down. Something—the basic heroic tone of the thing, that marvelous Spanish music (always a sucker for it), Sophia’s low-cut blouse (hey, a red-blooded boy of the era, what do you think?) made an imprint that stuck, and stayed, through years of enduring reading what a tanker it was.

Much later in life (deep in the Grown-Up-Be-Serious-Get Real-dead zone), I was fortunate enough to have a loving companion who, lo and behold, liked this oldie nearly as much as I did, as well as having the savvy to know how to humor me about it. It became an affectionate touchstone flick for our initially romantic, later enduring platonic relationship. A matter of days ago I found out, by accident—on the Internet, talk about connection and the lack of same—that my beloved ex had passed away weeks earlier (her family did not know how to contact me). With deep, undying affection, I dedicate this review, such as it is, whether readers agree or hoot, of an old & creaky, dated & unfairly maligned, rousing & moving warhorse of Hollywood epic melodrama: To the Kindest Woman I’ve Ever Known.  R.I.P., dear. You will always be ‘Juana’ to this kid. 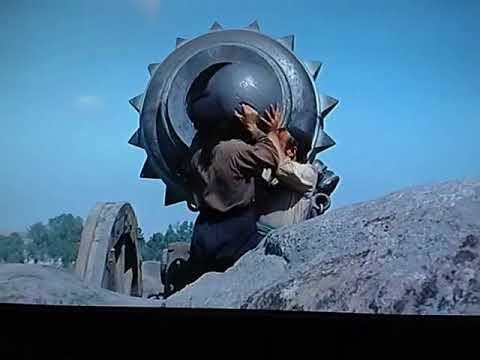 8 thoughts on “The Pride And The Passion”