FACTOTUM , from the Latin, literally means “do everything”, and is commonly used to describe someone with a wide range of work duties or experiences. Regarding the jerkweed subject of this 2005 indie, it would be more readily interpreted as “do next-to-nothing”.  And have me care even less.

Charles Bukowski’s semi-autobiographical 1975 novel has his alter-ego, ‘Henry Chinaski’ (Matt Dillon) stiffing employers and abusing both himself and the blowsy women who glue onto him for company, sex, arguments and someone to puke with. 94 minutes worth, directed by Bent Hamer (one more ‘m’ would seal the deal), who co-adapted the script with his producing partner Jim Stark. In the best-left-corked wake of Barfly (Mickey Rourke and Faye Dunaway sloshing down a case of cheap Bukowski in 1987), aside from tipping its acting prowess, this comes down to two bar stools. One occupied by those who find grimy sustenance in the world of Bukowski/Chinaski, where fans vicariously enjoy the ersatz existential ruminations, coarse lingo and gutter “honesty”—or another, one mystified patrons like me wobble on, weeding nada that’s revealing or redemptive, hopeful or useful, let alone fascinating, about any of the bums involved in the tale/s. 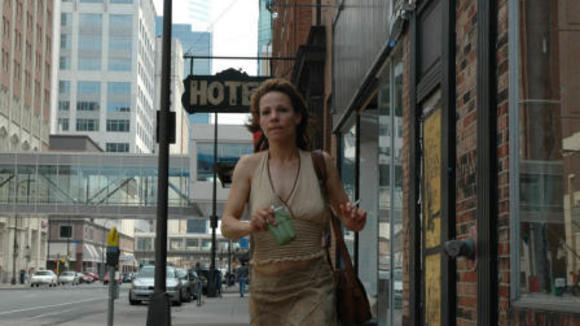 Dillon is backed up by Lili Taylor and Marisa Tomei, the two main reasons I hung on for the slide. I really like plain-as-cute Lili Taylor, who puts a different spin on every role she takes and always makes you believe the character is a real person. I adore Marisa Tomei, not just because she’s so damn sexy—that, yes—but due to her totally honest and unaffected delivery. I’d watch her do nothing but sit there. Dillon, 41 here, can be deadpan funny (There’s Something About Mary), dead-on intimidating (Crash), and show chops as a director as well (the excellent City Of Ghosts). I imagine it would be fun to have a drink—or several—with any of these skillful actors. I’d do it in a sleazy bar, even. I’ve had drinks in sleazy bars (and damn near every other venue) and have survived a number of crummy dead-end jobs, some I’ve walked off of, a few I was fired from. We understand a healthy skepticism, and well-earned cynicism about how f–‘d up a good part of society (make it plural) can be. Yet as much fun as waking up with a splitting headache and an impounded car can be, I just don’t think spending your life in a stupor and pissing on everyone and everything is the best way to attain much more than losing your liver and some teeth.

Bukowski made a life out of such a half-life, and somehow sold his soured screed prose as heroic to a turnover clutch of alienated (or trying to act like it) young people who fancy sordid glamour in cigarette stink, apish misogyny and vapid, faux-deep posturing. So, Life Sucks.  Maybe you do. BFD. *

* Drift, sleazeball, and drag the skank with you. Slumming by choice is–if you’ve ever seen real poverty and despair—not pitiable, but more like abhorrent in its selfishness. You can’t make it because you don’t feel like it, and I’m supposed to think that’s tragic or brave?  As Lee Marvin said to Angie Dickinson in The Killers: “Lady, I don’t have the time.”

One thought on “Factotum”