THE SEVEN YEAR ITCH  begs for scratching one sweltering summer in New York City. Wife and child off to Maine, the frazzled but decent dork hubby (Tom Ewell) relishes the chance to bach it, letting his over-active libidinous imagination muse about amorous flings, while he tries to resist cigarettes and the liquor cabinet. Then his younger va-va-voom upstairs neighbor (Marilyn Monroe) sways into the picture (he’s almost literally floored by a ‘tomato’) and a ‘harmless’ flirtation begins, with his impulses preceding “inwardly, downwardly“. It doesn’t help that his profession is thinking up sexy covers for cheap paperbacks, no matter the subject, changing titles such as “Little Women” to “The Secrets Of A GIRLS DORMITORY”. Let the horny times roll….

After ‘Richard’ opens a bottle of champagne, “The Girl” admires “You sure have strong thumbs!”  Richard: “I used to play a lot of badminton.”

In 1971, former 50s icon Debbie Reynolds bought Marilyn Monroe’s “subway grate” dress from this 1955 hit. Deb picked it up for $200. In 2011, Debbie’s collection of memorabilia went on auction: MM’s gust-gown fetched $5,600,000. There’s a 26-foot, 34,000 pound statue of the iconic bombshell/skirt/shot/pose that’s been carted all over the country, even as far as Australia. Some devious Commie in China made a full-size counterfeit, which ended up facedown in a junkyard in Guigang (pop. 4,400,000), reason enough to go to war over rocks in those contested sea-lanes 10,000 miles from Hollywood.

The famous image, as sacred to 20th-century American identification as the flag-raise on Iwo Jima, was captured by director Billy Wilder in 14 takes on location in New York City (on Lexington, off 52nd). But the presence of 100 photographers, several thousand whooping bystanders and Monroe’s pissed-off husband Joe DiMaggio forced retakes in California—40 of them— to get what Wilder wanted.

This all came about thanks—at least originally—to the furtive funny-bone of writer George Axelrod. An observer in synch with his time, Axelrod pondered the prurience of a pretend virtuous public still panting over the dual provocations of the Kinsey Reports. He conceived a risqué 1952 play (partly basing the dream-girl on actress Barbara Nichols, an eventual Monroe-type, one of the more amusing). It ran 1,141 performances, 900 of them with Ewell, who won a Tony for his efforts. Vanessa Brown (a very interesting person of many talents) played ‘The Girl”, but by the time cameras rolled Marilyn Monroe, 28, was taking the country’s pulse to ramming speed with five hits in a row and she won the movie role. Ewell, 45, was kept on board.  He’d done a few films (notably Adam’s Rib and Up Front) but had primarily been a stage actor (other candidates included Walter Matthau, whose time would come). *

“Miss Morris, I’m perfectly capable of fixing my own breakfast. As a matter of fact, I had a peanut butter sandwich and two whiskey sours.”

Of the basic material, Axelrod, in a 1953 interview said ” Throw a guy in a spot and let him work his way out of it. If the spot is one that enough people have been in themselves, you’re in business.” The play was pretty bold, with adultery not just contemplated but consummated. Hang on, this is a comedy, in 1955!  To evade the calcified, humorless censors Wilder & Axelrod’s adaptation (the director telling the writer they could use Axelrod’s script “as a doorstop”) required they cut most of the taste-optional material, making what had been sharp & lusty into something sexy but safe. Tease ruled. Wilder later expressed dismay with the result. Many reviews today, in a more gender-sensitive climate, harp on the obvious dated attitudes and feel compelled to slight Ewell’s performance.

“This thing about women and me. I walk into a room. They sense it instantly. I arouse something in them. I bother them. It’s a kind of animal thing I’ve got. Really quite extraordinary.”

Unless–in a different, dreary and currently accepted way–you’re as sex-challenged as the Hays hypocrites, this mid-past-century farce is—apart from a few clunkers—still pretty damn funny, and Ewell’s droopy, hangdog nerf hangs together: he’s very good. After owning the role for years, he knew best how to play the conscience-challenged guy, whether engaging in his cartoonish priapic daydreams, fighting a losing one-man battle with assorted biochemical urges, or trying to impress his coolness on the impressive hot neighbor.

“This is what they call classical music, isn’t it?…I can tell because there’s no vocal.”

Obviously, though, the big draw isn’t tormented Tom, standing in for millions of men, but the magnetic Marilyn, standing up for millions of their fantasies. She’s smart enough to be in on the joke of kidding her own image, and sharp enough to not overdo it. “The Girl” upstairs isn’t just insanely sexy because she’s mouth-watering beautiful, wears clothes like skin and “has everything that Uncle John needs”, but because she’s sweet, honest and fun. The naughtiness doesn’t glare, it sparkles. Plus she’s up for martinis, feels sympathy for The Creature From The Black Lagoon and “When it gets hot like this, you know what I do? I keep my undies in the icebox!”  No wonder the air conditioner drips.

* Matthau got his movie career started that same year by playing villains in two westerns, The Indian Fighter and The Kentuckian. He stayed in mostly bad-guy mode for years, not getting a chance to reveal his comedic side until the mid-60s.

** Finding fun in foiled frolic wasn’t invented during the Eisenhower administration. Situational sex comedies have been around since at least 411 B.C. (Lysistrata by Aristophanes). Just as there must be a journalism class that teaches “live-on-scene” reporters to use the word “literally” once every three sentences, there seems to exist an au courant p.c school of thought in talking about movies, tiresomely tsk-tsking the older ones. That delight-deadening den churns out finger-wagging reviewers who engage in mini-lectures affixing today’s selective standards onto what was contemporary light-banter many decades ago, particularly when that kidding cued comedies, especially the kind mocking the eternal Man-Woman joust. These morality cops must be a real riot on a date. If you can’t stand the jokes—don’t watch. If you can’t take one, leave the planet. 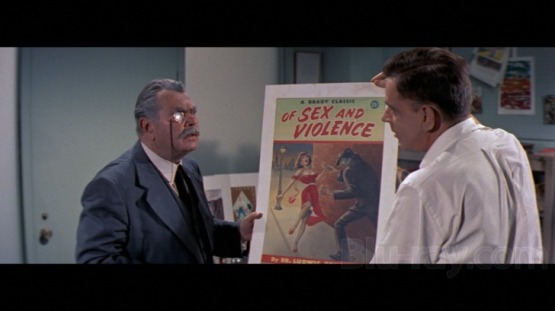 Along with trying to work around the Hays Code restrictions that tamed the play’s bite, Wilder had to manage the already-fragile Monroe, remarking later “I would get very angry at her”…”she was perfectly un-punctual. She never came on time once.” In her defense, she barely was given two weeks after finishing There’s No Business Like Show Business before she was dropped into this, and her bumpy marriage to a jealous DiMaggio was skidding into abuse and divorce. For the director, the behavior was nothing to what he’d face with her four years later on Some Like It Hot. But, his forbearance and the miracle of camera charisma brewed some of her most intoxicating elixir.  “Working with her,” he said, “was like being a dentist, you know- pulling those lines out like teeth, except the dentist felt the pain. But no matter how much you suffered Miss Monroe, she was totally natural on the screen, and that’s what survived. She glowed.” 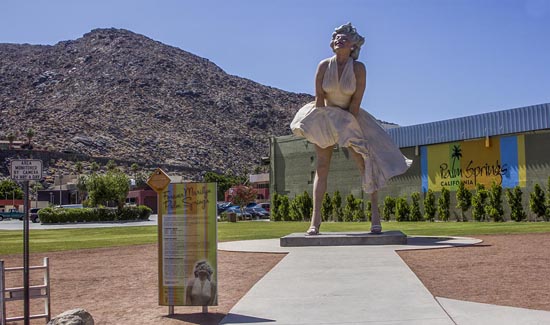 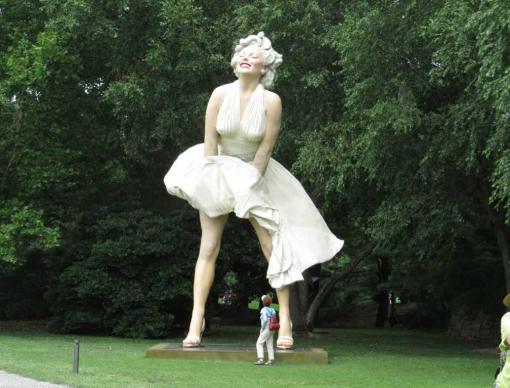 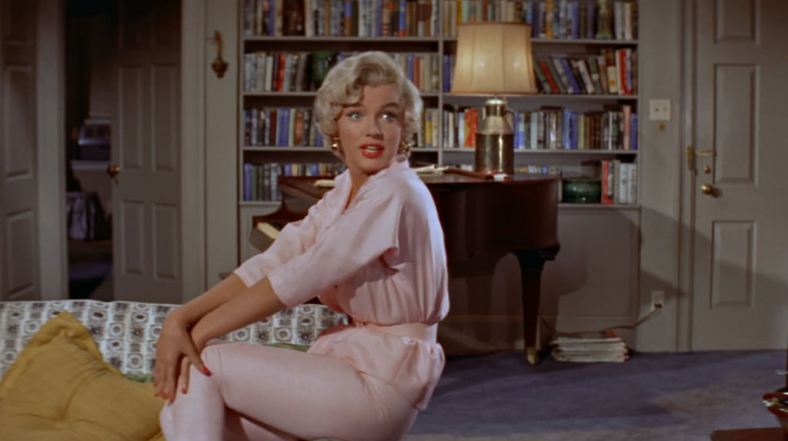 One thought on “The Seven Year Itch”