DISTURBANCE IN THE FORCE or, if you insist, STAR WARS: THE PHANTOM MENACE, ATTACK OF THE CLONES and REVENGE OF THE SITH. I loved the first three (now, someone pipe up “but these are the first three”) and have enjoyed to one degree or another the latest installments, but hadn’t re-visited the middle trio since their original releases in 1999, 2002 and 2005, when my reaction, like many older fans of the thrilling first batch, was something less than delirium. The enjoyment/endurance quotient went in reverse order. That judgement held true upon a recent return to “a galaxy far, far away”, in a marathon 3-fer with a wise Jedi friend who has a somewhat greater appreciation for them than this lowly Tusken raider.  Initial complaints stand, but 19, 16 and 13 years have mellowed musing considerably, from a vexed “no thanks” dismissal to a forgiving “fair enough” approval.

Sixteen years since the Ewoks partied in the Redwoods, Master Wizard George Lucas returned to his Jedi to provide the historical backstory for the phenomenon’s folk. He hadn’t directed since the inaugural blastoff, back in 1977.  First out of hyper-space (accent on hype) in now-distant ’99 came STAR WARS: EPISODE I—THE PHANTOM MENACE, a 133–minute crowd-baiting gamble of $127,500,000 that was planned over five years, took 66 days to shoot and 18 months to edit, plopping in 1,900 new-fangled effects shots. It does look great, a dazzle of color and sound, with some expected cool action (the pod race) and a pulsating John Williams soundtrack, which unleashes a particularly rousing track titled “Duel Of The Fates”.

Apart from the music and noises, listening to it is a chance to practice your grimace. The script thuds, the acting is waxen: how do you get listless work from Liam Neeson, Ewan McGregor and Samuel L. Jackson?  17-year-old Natalie Portman would become a superb actress, but is so bad here it’s amazing she got any work afterwards. Also hard to take is little Jake Lloyd, 8, as the young ‘Anakin Skywalker’ (sadly, Lloyd’s later life was troubled). Best work by far comes from Ian McDiarmid as the scheming ‘Palpatine’. Others in the cast include Terence Stamp (token), Ray Park (neat devilish makeup as ‘Darth Maul’) and Keira Knightley, 12, who plays Portman’s lookalike decoy princess.

Beyond a yawn-worthy reason for fighting (a trade dispute?, zzzz…) what drives a Black Hole vortex through the film is Lucas’s absolutely atrocious decision to include the clowning—and wretchedly unfunny—character ‘Jar Jar Binks’, and reams of baby-talk gibberish from him and his dopey ‘Gungan’ specie. Ahmed Best drew the unlucky job of playing the cringe-making oaf. Also insulting is the blatant Middle-Eastern stereotyping of the CGI-created ‘Watto’ (voiced by Andy Secombe). The subtlety may have escaped some, but a good billion people that live on this planet could readily take umbrage.

The foray was the biggest hit of the year, eventually grossing, with its re-release in 3-D, a binking $1,027,000,000 worldwide (“Jar Jar in 3-D—bring an axe!”). Oscar nominations went up for the worthy Sound, Sound Effects Editing and Visual Effects (all fell into The Matrix). 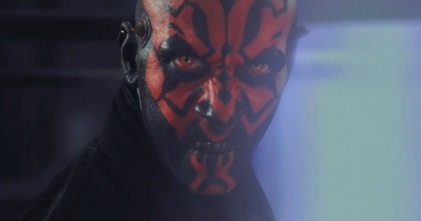 Three years later, Lucas directed STAR WARS: EPISODE 2—ATTACK OF THE CLONES, keeping a number of cast members (Portman, McGregor, McDiarmid, Jackson), adding the always impressive Christopher Lee—78 but still raring to saber-fight—to the bulging array of bad guys: he’s ‘Count Dooku’ aka ‘Darth Tyranus’.  Irksome little Lloyd-boy is gone, replaced in the growing Skywalker role by 19-year old Hayden Christensen. He beat out 1,500 applicants for the fulcrum part of the conflicted Vader-in-waiting. In the new crop of fans, teens, along with a fresh horde of kids, seemed to like the brooding intensity of Christensen; many adults were less impressed. He’s okay, but the sappy love story he shares with Portman (mercifully better this time), while essential to the plot, slows down an already taxing 142 minute running time.

The overall script is better, with a complex political undercurrent, and that Binks fool has greatly reduced screen-time  (send him to a planet inhabited by Alien or Predator, the four-year-olds would quickly get over his horrifying dismemberment). Otherwise, there is a supernova-load of furious action, highlighted by a nighttime speeder chase through the skyscraper canyons of the city planet ‘Coruscant’, the obstacle course fight on the droid assembly line, and the final wingding free-for-all on ‘Geonosis’. John Williams goes gung-ho on his scoring.

Daniel Logan makes a creepy young ‘Boba Fett’, while suave Jimmy Smits is onscreen so briefly you’ll miss him if you blink. The teeming ocean of Visual Effects were Oscar-nominated (The Lord Of The Rings: The Two Towers seized that precious).

With Anthony Daniels, Kenny Baker, Temuera Morrison, Jack Thompson, Joel Edgerton, Rose Byrne. Yes, that is Italy’s bellísima Lake Como in some of those peaceful scenes. Other filming was done in Tunisia, Spain and Australia.

A $120,000,000 price tag was absorbed when $649,400,000 rolled into Lucasian coffers, down considerably after the force-feeding of Jar Jar and merchandising overkill left segments of the known universe in rebellion. George’s home planet (Marin) may have been shaken that his Force came in 4th for ’02, trailing heroic hobbits, happy Hogwarts and the first leaps of the unassuming arachrobat Peter Parker. 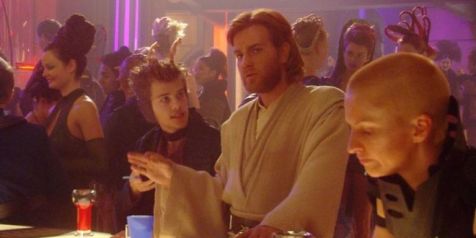 2005 then lined up against the Georgian Empire with the rollout of the 4th Potter prize, Narnian chronicling and Big Dog remakes of War Of The Worlds and King Kong. At a tag of $115,000,000, STAR WARS: EPISODE III—REVENGE OF THE SITH fought back with greater finesse and more fury than the first two episodes, ending on a much better note (for fans enjoyment and qualities sake, if not for the pulverized Rebels).

Christensen is stronger this time around, as are Portman and McGregor. Thirsting for the cloak of Emperor, McDiarmid has a fiendish field day. Reporting for duty: Lee, Jackson, Daniels, Baker and Frank Oz as ‘Yoda’. Though his estimable presence  is still underused, Jimmy Smits at least gets more to do this go-round. Over the densely plotted, darker- themed, grislier 140 minutes some 2,150 special effects shots zip, zoom, flash and blow-up around the gallery of worlds and creatures, saviors and snakes. John Williams music swells to proper grandeur with “Battle Of The Heroes”.

True, you still have to suffer dialogue like “Hold me, Ani. Hold me, like you did by the lake on Naboo…where there was nothing but our love…”, but there are a decent number of scenes with real power. As with all in the series, the art direction is fabulous, especially here in the volcanic showstopper that tops it off.  It received but one Oscar nomination, for Makeup; that wonderful set design left in outer space. Reviews were good, box-office pods lit up with $848,800,000. Episode III makes for a satisfying conclusion to the trio. Then—the saga slept (apart from obscene price-jacking of DVD editions) until 2015, when The Force awakened anew, in fresh hands, with an eager audience from several generations.

It’s too easy for adults to snidely ignore or simply forget (in blissful grownup-itude) that the vast majority of movies that aim to please not curmudgeons but crowds (and bring money back on their investment, if you can imagine such a ghastly philistine thing) are written in a tightrope-walk that seeks to be both enjoyable and understandable to people aged four-to-foregone, a task easier said than done. Lucas can be forgiven trying to make kids happy (OMG, what a terrible thing) with a rollicking adventure, keep teens glued with gadgets and design, and have older seat-holders grin with acknowledgment of his deft weaving of a tale-tapestry that mixes varied mythology, contemporary social issues, astonishing imagination, flabbergasting craft and gobsmacking technical skill with good old-fashioned sword fights into a millennium-spanning falcon of fun. People that “hate Star Wars”/Potter/Batman/Bond/et. al are likely to be the type of buzzkill fart that looks at the Grand Canyon and see a big, hot ditch.

3 thoughts on “Disturbance in The Force”