YOR, THE HUNTER FROM THE FUTURE—–Supporting character ‘Pag’ intones: “We will need a lot more hemp before we’re through.” From 1983 (now yore) further dimming the chances buffed ex-footballer Reb Brown could shake the curse of having played Captain America in a lousy TV movie, this came from Italian schlockmeister Antonio Margeriti (you’ll need several) who used his nom de plume Anthony M. Dawson for the directing credit.  You’d want to disguise your name, too, if it was attached to this sword & ray gun idiocy, which runs a daft 98/88 minutes, cut down from an original 200 minute mini-series situation (Two hundred minutes of Yor? Can’t we just bring back Mussolini?–oh, I guess we did, sorry…)

I suppose it’s good for laffs (fill the pipe), with Yor pronouncing tidbits like “Help me cut the choice meats.”  Then there’s ‘Roa of the Sand People’, who shares “They say I came here together with those men, there, caught in the ice. Why I am alive and they are dead I don’t know, and why the ice has formed in this parched desert is a mystery without an answer, but the little water that comes from it is vital to these people and they worship me, as a divine goddess.”

Reb Brown did have a neat bit as ‘Enforcer’ in Big Wednesday and was one of the heroic hardies in Uncommon Valor. Director Dawson/Margeriti filed 57 credits, including immortal entries like The Young, the Evil and the Savage, The Unnaturals, Seven Dead in the Cat’s Eye and Cannibal Apocalypse. I guess we’re talking mini-legend here. This one, based on an Argentinian comic book, was filmed in Turkey and earned $2,810,000 in the States, reeling at that time under an onslaught of cheesy ‘Conan’ clones. With Corinne Cléry and Luciano Pigozzi. You may long cherish the scene where Yor kills a giant bat and then uses it as a hang glider. Help me cut the choice meats…. 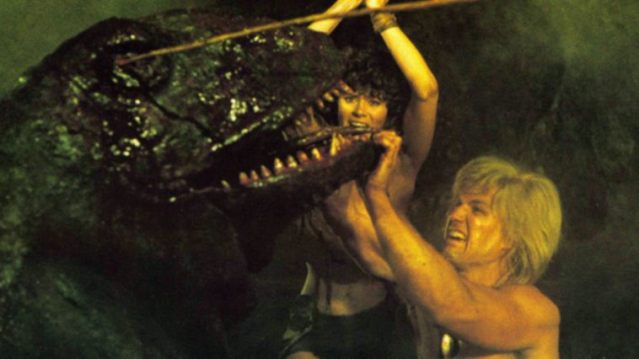