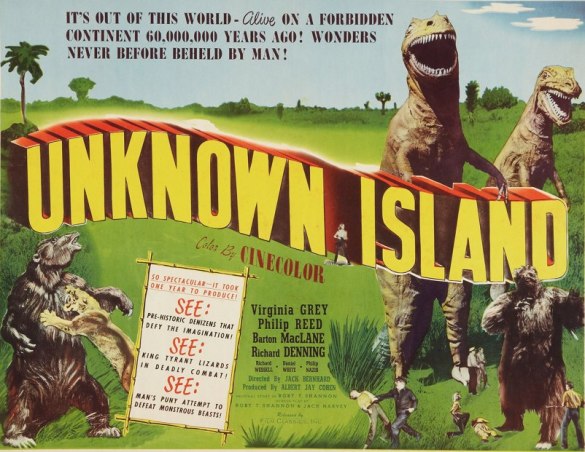 UNKNOWN ISLAND ——“We’re going back to that island, Fairbanks. Back to find the beasts that chewed up your pals while there were still alive and kicking. You wanna come along?”

Just as prehistoric life battled for supremacy, there exists a bottom-feeding frenzy of bad Man v. Dinosaur movies and this 1948 Wankodactyl is on a Geo-hosaphat scale by itself. We hardy trailblazing pioneers have been exposed to the fossilized remains of The Land Unknown, King Dinosaur and—well, the path has some large footprints to fall into. 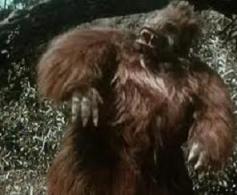 Here (look, when I was five I knew this sucked…) we are dealing with an embarrassed Virginia Grey, Barton MacLane and Richard Denning as they observe Ray ‘Crash’ Corrigan play a Giant Sloth who wrestles a Ceratosaurus (mis-identified as a T-Rex: even in kindergarten I knew my frickin’ saurians).

75 minutes unfold, with Philip Reed and silent-era actor Snub Pollard as a ‘Singapore barfly’.  Jack Bernhard was the man who proudly signed his name as Director.

Its best scene occurs when the ‘ceratosaurs’ attack: these were stuntman in rubber suits, filming in Palmdale, California. The desert heat felled one of the poor stunta-saurs, and the moment remains to highlight one of the ‘exciting’ action scenes. I point the diligent movie-archaeologist to the fabulous review at the site ‘Shadows B-Movie Graveyard’—someone who knows their junk, or has even less of a social life than me….”And twenty more says she’ll be drinking with me in five minutes. And fifty more says that in an hour she and me will be, well…pals.”