You’re 14th in the cast: what could possibly happen if you cross that lava bridge?

WHEN TIME RAN OUT…—–“This thing’s a powder keg!”   Irwin Allen’s last feature film was a major flop, excoriated by critics and deserted by fans of his earlier disaster epics. Another all-star cast, with something Huge that will kill half of them (often because of pretty stupid behavior), this 1980 attempt to re-milk a dry cow was famously dubbed by Leonard Maltin “When Ideas Ran Out” and only returned $3,764,000 to Mr. Allen after he’d plowed $20,000,000 into salaries, cut-rate explosions and location shooting on the Big Island of Hawai’i.  A sad flameout for the indefatigable guy who’d given us so many monsters, submarines, tidal waves, burning skyscrapers and swarms. 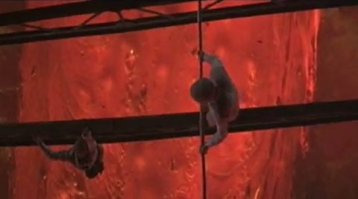 James Goldstone directed. The dimwitted screenplay bears the names of Carl Foreman and Stirling Silliphant, but this credit is not one they would have wanted on any cinematic tombstone. Waiting to get paid and/or perish: Paul Newman (as the generic ‘Hank Anderson’: he called it “that volcano movie”), William Holden, Jacqueline Bisset, Edward Albert, Ernest Borgnine, Red Buttons (where’s that lava?), Barbara Carrera (here’s some lava, baby), Valentina Cortese, Alex Karras, Veronica Hamel, Burgess Meredith, James Franciscus, John Considine, Pat Morita and Lonny Chapman. It managed to coax a Costume Design nomination from the Oscars, but understandably lost to Tess. 121 minutes. There she blows…

If you need a Flee Volcano movie, find popcorn and kick back with Spencer Tracy and Frank Sinatra in 1961’s The Devil At 4 O’Clock—a lot more fun.

Great place for an observatory

2 thoughts on “When Time Ran Out…”