CONTAGION is a disaster movie with a difference: it’s smart. Since it’s also about something beyond wicked this way surely coming, the 2011 globe-hopping—and decimating—thriller puts its chill factor into the realm of cold dead hand reality. How many of you know what a ‘fomite’ is? Well, you’re wearing and touching them all day long, and they can help kill you if the wrong bug hitches a ride with them. “It’s a bad day to be a rhesus monkey.”

A bat, a pig, a snack and a handshake lead to The Cough Heard Round the World, which starts with high spirits in a Hong Kong casino and jets its way to other parts of the map with ease, revealing itself as a lightning-fast, mutating illness  with a seemingly limitless capacity to spread. High mortality. Officials and facilities are overwhelmed, conspiracy theories arise, valor and co-operation cross paths with self-preservation and hypocrisy. Looting erupts, troops deployed as freedom bangs into chaos. Doctors race, panic ensues, society fractures.

The plague is a major—and 100% believable— drag for the cast of characters, but fortunately for audiences the viral host is the constantly venturesome, super-skilled director Steven Soderbergh. He cuts some of the smartest, leanest and most challenging of thrillers, equally adept with either light, fun material or the full-on darker type as with this planet-engulfing epic. As ever, he was his own cinematographer. With the assist of top-rank editor Stephen Mirrione (Traffic, The Revenant, Birdman) Soderbergh balances multiple propulsive, interconnected storylines within the overall narrative, keeping exposition clear and action moving.

“Blogging is not writing. It’s graffiti with punctuation.” (OUCH)  Written by Scott Z. Burns (The Informant!), eschewing melodramatic hysterics or phony plot devices, the clock-precise progression of events in the screenplay allows for the human confusion and tragedy elements to complement rather than intrude and unbalance the framing. The time-race dilemma is underlined with a danger-throbbing music score from Cliff Martinez, his 10th collaboration with the director. Like Jerry Goldsmith’s neat soundtrack from the fave 1965 oldie about bio-doom, The Satan Bug, Martinez’ sounds are appropriately clinical and remorseless, suggesting invasive alien assault to just the right degree without overplaying it. 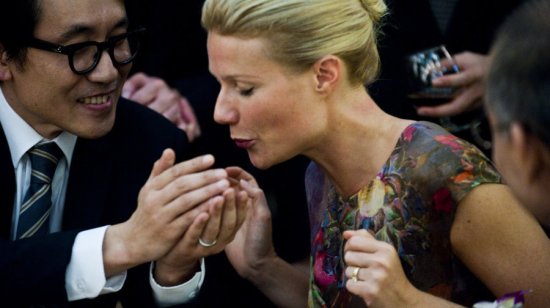 Looming pandemic too gloomy a topic? Cheer up, it’s quite possible you won’t have a chance to cough to death before our science-scoffing ‘experts’ in high office and/or uniforms get us vaporized in order to display ‘resolve’ (result meets resolution). Perhaps the water will run out first? Fresh water, that is, since life-free, goop-clogged salt water will be readily available. Bets? Let’s have a group pray, with certain exclusions, of course, and be sure to come packin’. Couldn’t happen to a more destructive and deserving pest. 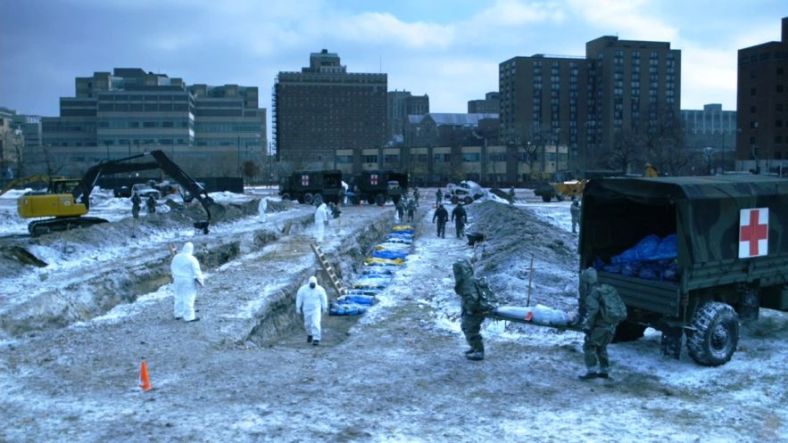