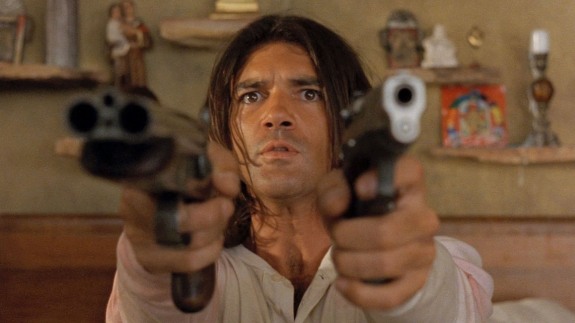 DESPERADO continues the bloody vengeance trail begun in the 1992 indie classic El Mariachi, with the packing guitarist’s body count again directed, written, edited and produced by Robert Rodriguez. He’d also manned camera on the first one. For this 1995 sequel he gave those chores to Guillermo Navarro and turns the role of the dexterous avenger over to Antonio Banderas. The budget increased to $7,000,000, the number of riddled hombres to 67. *

Well-reviewed for its auteur’s dazzling kinetic style and the performances, less-so for the storyline’s empty pulp excess, this bullet-in-cheek vermin-vanquisher shot up $25,400,000 in receipts. That was no doubt helped by Rodriguez filling out the cast with Salma Hayek, Joaquin de Almeida, Steve Buscemi, Cheech Marin, Quentin Tarantino and the essential Danny Trejo.

In her third film, Hayek, 28, is so beautiful and desirable it’s a given that a large part of the audience (65% guys, for this kind of exercise) would indeed venture into the seedier border bars of Ciudad Acunã to rescue her. Plus ‘Carolina’ runs a bookstore!

Marin and Buscemi get a great scene together, in a grungy cantina, while Trejo only speaks with throwing knives. Thankfully, the irksome Quentin has just a cameo (jabbering a long and stupid joke) before he’s blown away.

Foolish fiendish fun for a good while, then its creative but ceaseless overkill runs out of gas (and bodies). 104 minutes. Music by Los Lobos. With Carlos Gomez, Carlos Gallardo, Angela Lanza (The Perez Family), Mike Moroff, and the less-lovely sections of Ciudad Acunã, Mexico, sharing the Rio Grande with sister city Del Rio, Texas. 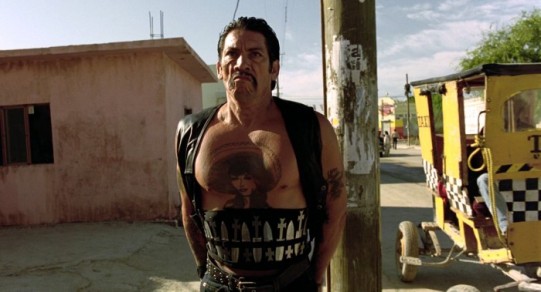 * Eight years on, Once Upon A Time In Mexico completed the trilogy. Rodriguez shot El Mariachi in ’92 for $7000. In 2003, the last installment took $29,000,000—4,142 times as much. That is Banderas actually hitting slick licks on the guitar: he started playing when he was 20, so he’d had 15 years to hone skills. Speaking of cojones dedicado, Rodriguez said the day they shot Salma Hayek’s love scene with Banderas, the entire crew showed up to watch. Gee, I can only wonder why? Sadly, for those art-committed individuals, he and his script supervisor were the only ones allowed in the room with the actors. Man is cruel.

One thought on “Desperado”