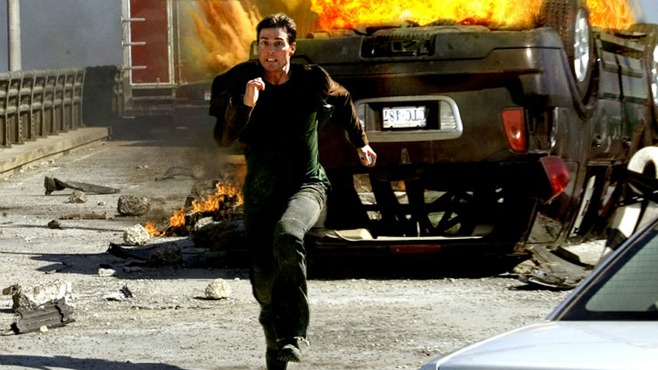 MISSION: IMPOSSIBLE III —-“should you choose to accept it“, may keep you from watching the next couple in the series, which is too bad, because they’re really good. Aside from competent performances and a good job on the scoring, this mission fails to engage. It may even enrage, if you’re not fond of cameras that WILL NOT FRICKIN’ HOLD STILL!!!!!!!

Two missions this time out, both highly personal for team leader ‘Ethan Hunt’ (Tom Cruise, front & center, over-much). The first is rescuing someone he trained (Keri Russell), the second has him trying to save his wife (Michelle Monaghan) from a cruel arms dealer (Philip Seymour Hoffman) who was also involved in the first assignment. Back on board is Ving Rhames, new to the outfit are Maggie Q, Simon Pegg and Jonathan Rhys Meyers. Billy Crudup and Laurence Fishburne argue back at headquarters. Locales include Shanghai, Rome, Berlin and Virginia Beach (blowing holes in the Chesapeake Bay Bridge).

Everyone in the cast does their job. Monaghan is quite good. Russell is barely there, a shame as she’s always a pleasure. Hoffman’s character is so sadistic it is hard to enjoy; the movie is meaner than the others. Seven action sequences, some good stunts. Tom runs fast, Maggie Q wears a hot red dress, things explode. Michael Giacchiano pulls a slick riff on the score, putting new spins on the iconic theme. The script is weak, logic holes gape like Martian canyons.

“I’m not saying I have a better idea, but there’s a point where bold becomes stupid.”

J.J. Abrams directs, his first feature, and I don’t know whether the blame lies with him fully, but he has Dan Mindel’s cinematography so jerky and the editing so sped-up that a flea on crank couldn’t out-jump it. It’s maddening, confusing, getting utterly ridiculous. The same shaky nonsense had me walk out of The Bourne Ultimatum (third in that series) after ten minutes. I stuck for the complete 125 minutes of this, gritting my teeth. Fortunately the next Mission’s cut the crap and performed beautifully. Like the ubiquitous tape message, this one self-destructs into smoky nothingness. 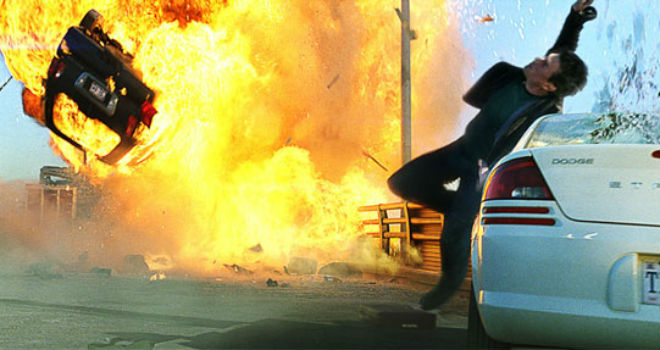