GUNFIGHT AT THE O.K. CORRAL lasted thirty lethal seconds when 34 shots were exchanged on Oct.26, 1881 in Tombstone, Arizona. In this 1957 telling the shootout runs seven minutes and adds four more bad guys biting dust to the true total of three. So, historical accuracy in this high-profile favorite has to do with Colts and shotguns rather than pencil lead wielded by Leon Uris, who wrote the script directed by John Sturges. Not the most factual version, or the critical favorite, but adjusting for inflation, it’s the one the most people paid to watch. “Print the legend” time. * 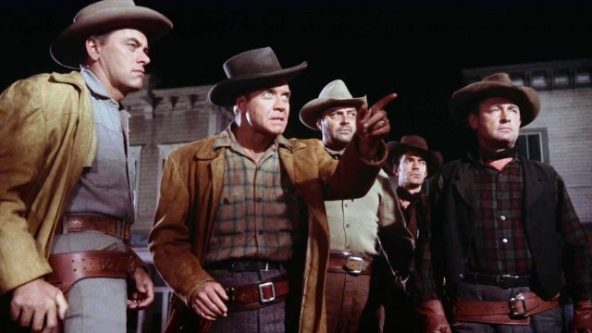 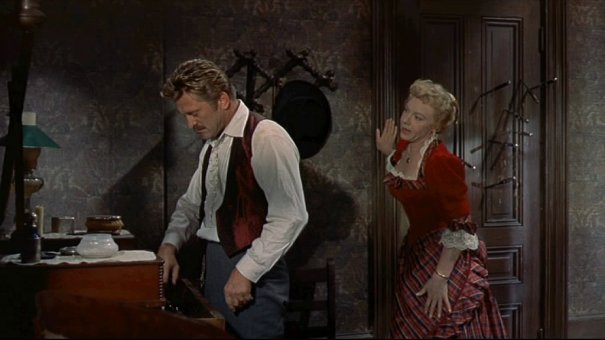 If your girlfriend was Jo Van Fleet, you’d throw knives at the door, too

Ignoring the mix’n match of factition, the screenplay is intelligent, and Sturges’ assured, unobtrusive direction manages a tight rein on his feisty cast. He’d come off the highly regarded Modern West thriller Bad Day At Black Rock and independent producer Hal B. Wallis saw him as the right honcho to steady an adult-minded genre picture. Though it became his first big hit, the laconic director later felt he didn’t imprint strongly enough on the finished product, reflecting “…it doesn’t hold up like Black Rock or The Magnificent Seven. It looks ‘movie-ish’ and arty, the sets look too clean, and I think it’s staged in a mechanical manner.”  Well, all true to a degree, but, heck, it’s consistently fun to re-watch, thanks to the top-line actors, a sure-fire story’s conflicted characters and Dimitri Tiomkin’s galvanizing score, with its irresistible title theme setting the tempo. Popcorn time, pardner: leave your blame-shame societal anxiety for some other two hour gnash.

Lancaster, 43, and Douglas, 39, had worked together as newbies back in 1947 on I Walk Alone. In the interim, they’d become big stars, with clout and egos to match (plus industry savvy, survivors instinct and raw intelligence). Initially competitive rivals, their lifelong friendship really began in the 56-day shoot of Gunfight, during which they tested Sturges’ command while they jousted, jested and hammered out approaches to Wyatt & Doc’s offbeat pal-ship. Lancaster is solid and serious, while Douglas gets the meatier grub as the flamboyantly lethal dentist/gambler/killer. ** 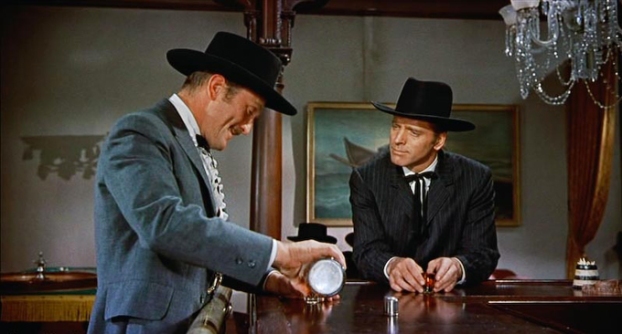 Douglas also lucks out with his ‘love interest’ by having the explosive, Method-trained Jo Van Fleet to battle with: it’s an inspired pairing; bruising, believable sadomasochism. Van Fleet is a force of ill-blown nature and Holliday a can’t-lose rascal for actors to sink teeth into. On the calmer register, Rhonda Fleming’s window-dressing character is given short shrift by both script and direction; she didn’t assert herself and Sturges may have felt he had his hands full with the others. 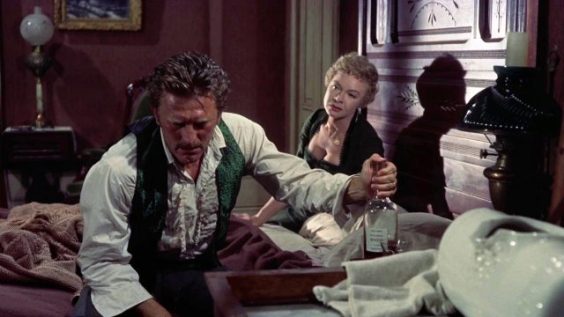 The movie does have a lot of talk, winding up to the extended, exciting wipeout at the climax. Keeping tension torqued between dialogue and/or bullet exchanges is that great Tiomkin soundtrack, one of the genre’s totems from the era. Starting off with Frankie Laine’s pitch-perfect slaying of Ned Washington’s lyrics in the born-to-be-hummed title tune, Tiomkin’s sudden, bold orchestral surges counterpoint quiet, rustling nervousness; a brilliantly subtle job underpinning the lament of duty and the destiny of fate. Damn right it does!  “There the outlaw band/made their final stand...”

I ain’t gonna make out of this corral alive, am I?

* So far (ear to cactus, stay tuned) there have been eight movie versions of the fratricidal frontier fracas. Critics always go lockstep for Ford’s My Darling Clementine (lyrical make-believe) and Sturges’ own taut redo Hour Of The Gun. As to the lowly audience, if you adjust grosses to inflation then Gunfight At The O.K. Corral comes in first, followed by My Darling Clementine (1946), Tombstone (1993), Frontier Marshall (1939), Tombstone:The Town Too Tough To Die (1942), Wyatt Earp (1994), Hour Of The Gun (1967) and Doc (1971). The most accurate staging of the singular event was done by Lawrence Kasdan in Kevin Costner’s underrated Wyatt Earp.

** Before the term ‘buddy picture’ was coined (paging Newman-Redford), Lancaster was perceptive enough to see the possible dynamics behind Wyatt & Doc, telling Douglas “We’re playing two pre-Freudian fags. We’re in love with each other and we don’t know how to express ourselves that way—we just kind of look at each other and grunt and don’t say very much, but you know we love each other.”  As Ms. Fleming put it, maybe with more discretion, “When we started out, it was going to be a love story between Burt and me with a strong relationship between Burt and Kirk, but as it went on, the relationship became stronger between Burt and Kirk, and I was kind of left holding the horse.”  Be it what it may, the advertisements suggested “The Strangest Alliance This Side Of Heaven Or Hell“. And here I thought it was about good guys vs. bad guys….”There they lay/side by side/the kill-ers that died/in the gun-fight at O.K. Cor-ral”…. 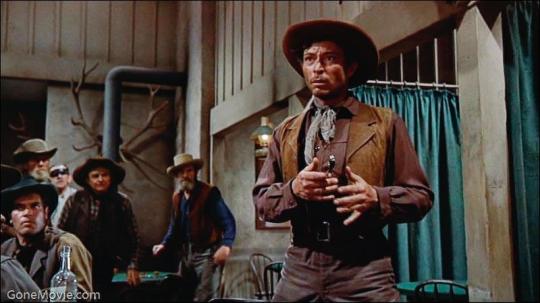 3 thoughts on “Gunfight At The O.K. Corral”