ADVISE AND CONSENT  felt smart and timely in 1962, handsomely walking an entertaining line through frank, daring-for-the-day subplot material while keeping a comforting theme of continuity reassurance alive as thoughtful adults soberly dealt with matters of social import and civic duty.

The ailing President doesn’t think his low-wattage VP has enough gravitas to continue foreign policy effectively and tasks the party heads to ensure his controversial pick for Sec. of State is pushed through a divided Senate. Support and opposition wheel, deal, cajole and threaten to make their respective cases, up to and including perjury and blackmail. Is this any way to run a government? Seen today, the question is better posed—what other way is there? 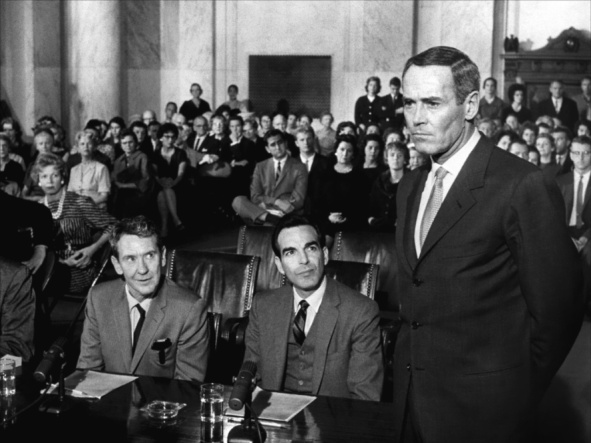 The tale and tellers wrap 139 minutes with the glib insider pedigree of a third-generation Georgetown party hostess. Wendell Mayes script came off the acclaimed 1959 novel from D.C. expert Allen Drury, who took home a Pulitzer Prize while the 616 pages stayed on the best-seller list for 102 weeks. He was a conservative, hardcore anti-Communist. Producer-director Otto Preminger hardly fit that mold (except for his totalitarian tendencies on set) and the cast was stuffed with lefties—Henry Fonda, Don Murray, Charles Laughton, Peter Lawford (brother-in-law of the actual President, Kennedy), Gene Tierney, Franchot Tone, Lew Ayres, Burgess Meredith, Will Geer. 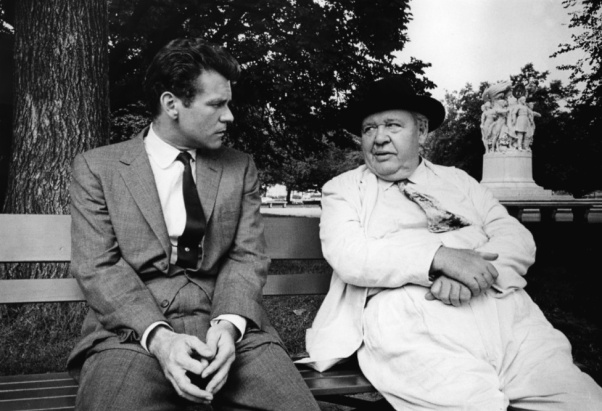 They’re all good; the main showboat performance goes to Laughton, in his final role, as a grandstanding Southern orator (he died six months after it came out, 63). Walter Pidgeon is his usual dependable authoritative self. Murray deserves extra credit for one of the first mainstream movie portraits of someone with sexual interests outside what was then “accepted” (thus the blackmail subplot–Preminger took us to Hollywood’s first look inside a gay bar). Meredith has a powerful cameo role as an unbalanced witness with an axe to grind. It helped re-launch his career. George Grizzard handily bops it to third playing a ceaselessly nasty type who was modeled on Joseph McCarthy but seen today could stand for any number of too-familiar ruthless sleazeballs. The elegant Tierney was back on screen for the first time in seven years, having been sidelined by personal demons. 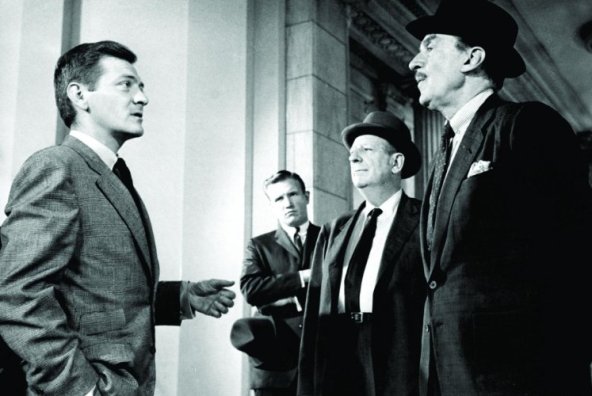 Others in view: Paul Ford, Inga Swenson, Eddie Hodges, Edward Andrews, Betty White (her feature debut), Malcolm Atterbury, Paul Stevens and Tom Helmore. Dissonant soundtrack from Jerry Fielding (The Wild Bunch), his debut job scoring a feature. The film came in 42nd place for the year, four slots behind 1962s other political poke-in-the-eye, The Manchurian Candidate. It’s a tragic commentary on where we’ve come since that  now the latter film, a fanciful thriller, is the one people reach for and respect.  This once-fresh take on what was the traditional, quasi-civilized give & take bloodsport of Washington D.C. seems as remote from our present grotesque farce and its cast of cruel hypocrites and swinish sellouts as a picnic with Pollyanna. God help us, because the poison spiders, blood ticks and dung mites in Washington clearly won’t.