WONDER WOMAN surprised me. I’m not that big on SuperHero epics, and have no doubt allowed myself to be prejudiced against watching a number (well, most) of the recent spate of huge CGI extravaganzas involving people (or variations thereof) who can do things that...can’t be done. Once in a while, though, someone breaks the moldy mold, and this 2017 megahit pours new life into the classic comic-book heroine who first debuted back in October of 1941. Auspicious augury? American avenger? Amazing Amazon?

‘Diana Prince’ aka WW (Gal Godot) recalls her upbringing as an Amazonian princess, on a mystical island of women warriors shielded from the outside world. When an airplane bearing a handsome American pilot (Chris Pine) breaks the skein separating his world (engaged in the First World War) from hers, with Germans on his tail, Diana pursues destiny.  Together she and the gallant airman try to keep the evil geniuses behind the German war effort’s last gamble from making the whole catastrophe even worse.  The man-naive but exceedingly spirited gal (er…Gal) proves more than a match for what the twisted world of military men can throw at her—lead, poison gas, kissing…

Director Patty Jenkins does a superior job marshaling a huge-scale production, bulging with detail, recreating assorted settings of the period (the Mediterranean, London, the Western Front), making the action sequences physical and exciting without letting the CGI wonder overwhelm the human element. The early segment, in the mythic paradise queendom of Themyscira gets things going in passion and style with imposing grace via ‘Antiope’ (Robin Wright) and ‘Hippolyta’ (Connie Neilsen) grooming the wonder Gal for her rightful pantheon placement. *

The building relationship between the ethereal Diana and the earnest airman works thanks to the photogenic flirt chemistry and subtle underplaying between Godot and  Pine. He makes a swell guy-candy flyboy.  Statuesque, striking and smart, Godot asserts herself into the comic-book vitality and wishfulness of Wonder Woman with as much humor, flair and gravity as Christopher Reeve brought to the first Superman back in the olden days of the late 70s. Her casting is a coup, they picked the right Gal. **

At 142 minutes, as with most of these portent-laden, speaker-rattling fantasies, things go on longer than necessary, and smithereens are given full access to blow. The screenplay clutters an already exposition-stoked plot with a tacked-on array of helpers (Said Taghmaoui, Ewen Bremmer, Eugene Brave Rock) each seemingly designed to capture some slice of p.c. demographic.  In the original comics, the limber lass did most of her wonder working in WW2, but in this shift back to The Great War, the script takes real-life German General Ludendorff (Danny Huston, on mad boil) and, banking on a modern audience knowing flat-Nothing about WW1, has the Kaiser’s hard-case become a caricature of supernatural Evil. Along with his sadistic ‘Doctor Poison’ (Elana Anaya, hiding her beauty under creepy makeup), the script really lays on The-Germans-As-Bad-Guys-Theme, almost like a movie made decades back. It’s…a bit much. ***

Weaknesses, however, are absorbed by the sincerity, energy and general dazzle of the enterprise, and the centering presence of the assured leading lady. Box-office results these days are so astronomical that they fit the superhero realm: this made $822,000,000 (how much in Germany?), safely shielding & shrewdly lassoing an expended $149,000,000. Reviews extolled, heated discussions about feminist heroines surged back & forth across editorials and the blog-scape, hordes of young wonderers were inspired, Halloween costumes sold out. Superhero actress Gal Godot officially became a superstar. “The End, but Diana will Return…”

* Patty Jenkins first film was also about a determined woman, albeit with a different kind of upbringing and male-inflicted circumstances—Monster.  Her observation on the non-comic, existential trial of today: “Our fantasy of a hero is that he’s the good guy who is going to shut down the bad guy. That has got to change if we want to deal with the crisis that we’re in. There is no bad guy. We are all to blame. New kinds of heroics need to be celebrated, like love, thoughtfulness, forgiveness, diplomacy, or we’re not going to get there. No one is coming to save us.” 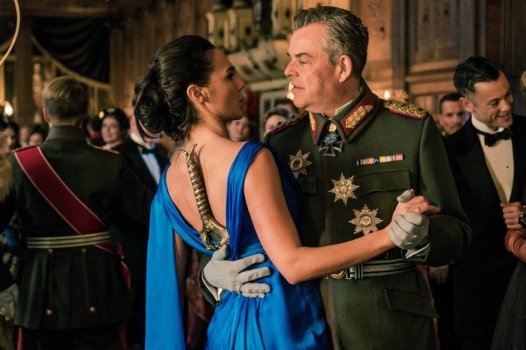 ** 31 during filming, the 5’10” former Miss Israel of 2004 served two years in the IDF as a sports & combat trainer. Soldier, martial artist, model, singer, actress: the villains of the DC Extended Universe are on notice.

*** Yes, Germany gets the major portion of blame for WW1. That’s partially because they lost. Play fair: along with the strutting Kaiser and “that whole Prussian thing“, you can point a firing squad at the leaders of France, Britain, Russia, Turkey, Italy and Austria-Hungary. But then, that would require reading something more than texts off a phone. 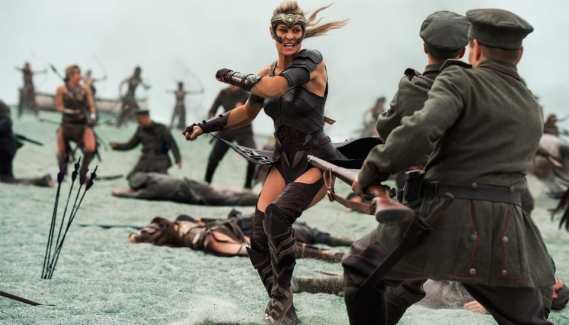 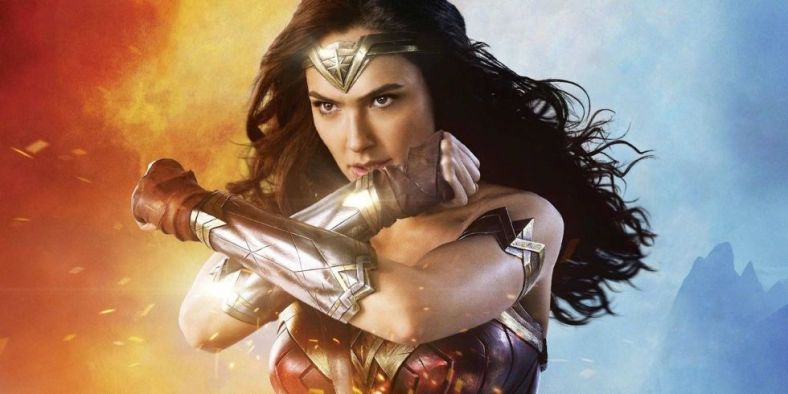 One thought on “Wonder Woman”