PILGRIMAGE is a dank trek into the Dark Ages, somber as a sermon and as blood-soaked as the history of Christianity. Director Brendan Muldowney marshals his costuming and score, and especially his location camera work, to give the small-scale story some patina of a mini-epic. At war with its cause’y-noble ends, the screenplay from Jamie Hannigan leans too much into the Portentous Statement realm and the gouts of blood and guts and overall cast-decimation grow as tiresome as they are brutal and unpleasant. Like its plot, the earnest film amounts to committed, diligent toil to no clear end.
“Christ rejoices with everyone you destroy! ”

Ireland in 1209. Monks from an isolated monastery are ordered by an envoy from further up the church hierarchy to convey a cherished relic to Rome. First problem is getting across their own strife-torn island, a superstition-enveloped battlefield eaten up with conflict between marauding Normans and ferociously wild regional tribesmen. The unarmed monks include young novice ‘Diarmuid’ (Tom Holland) who finds as much trouble boiling out of the fanatical Cistercian envoy (Stanley Weber) as from the calmly murderous Norman escort (Richard Armitage). A brawny mute (Jon Bernthal), who reveals himself adept at combat, protects the beset Brothers. 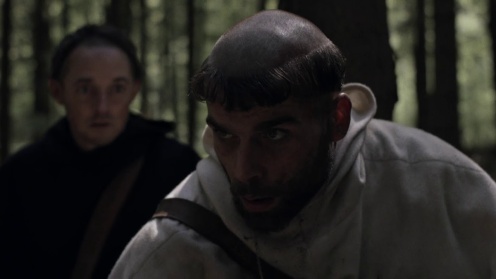 Generally, when a movie starts with a caption announcing the 13th-century, you can bet you’re not in for a lot of lightness and merriment. This brief 96-minute trial of faith-by-agony has precious little warmth to temper its moody philosophical turf-tiffs and harsh hacking, chopping, thrusting, skewering and disemboweling, complete with what may be a record for actor-dripping-snot-while-bound & tortured scene. Not a chick flick.

The script seeks profundity by an easy underlying referencing of religious mania, political hypocrisy and land-grabbing, but it offers nothing new in that sorry department, and the cast have to breathe life into a play for something bigger relating to “us” than this little tale can fully deliver.  Nothing wrong with the acting, however (though nose-leak-guy could have eased back on the schnoz throttle).  Effective raving-zealot spite from Weber and scruples-elective knight nastiness from Armitage both reek true to historical fidelity. Bernthal gets to go full-on-badass and convinces. Furthering the authenticity angle is having the cast converse in a blend of English, Gaelic, French and Latin. Their conversations may color a spectrum, but they all bleed the same red. 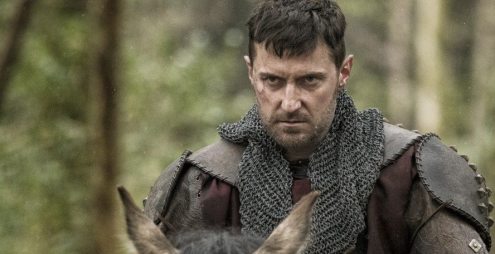 Filming was done on location in Connemara, County Galway in Ireland and in Belgium’s legendary forest-shrouded Ardennes. Tom Comerford’s quite good cinematography captures the sense of time and place, the mists, bogs and woods ancient, timeless and beautiful, their be-stilled interior reaches mysterious and dangerous. Stephen McKeon whips up a suitably tense, galvanizing score, with some haunting choir passages. *

Budget came in around $5,521,000, a small outlay for a polished production. With John Lynch, Hugh O’Conor, Ruaidhri Conroy, Eric Godon and Tony Condren as ‘Wolf Head’, the fearsome, startlingly bedecked berserker during the ambush sequence.

* Working with composer McKeon, the renowned Crux Vocal Ensemble from Dublin, under direction from Paul McGough, had their ranks expand for the recording to make the largest male choir yet arranged in Ireland. Instead of their usual sixteen, sixty voices can be enjoyed on the soundtrack.