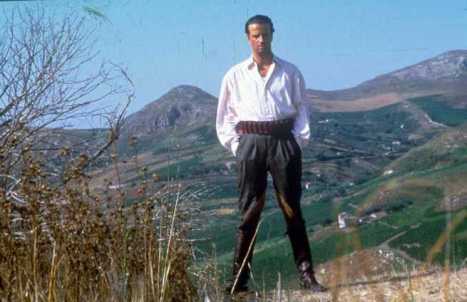 I’m gonna make you a film you will refuse

THE SICILIAN was spawned from Mario Puzo’s 1984 companion novel to “The Godfather”, taking liberties mixing the Corleone family with legendary true-life bandit Salvatore Giuliano, a ruthless and fascinating character from the 1940s.  A well-regarded 1962 Italian movie bearing his name is a favorite of Martin Scorsese. Not many would cite as favorite this utterly botched 1987 flop by hot-air maestro Michael Cimino, who made a mini-Heaven’s Gate out of the draggy gangster epic; over-spending, over-indulging, underachieving anything but incoherence and boredom. 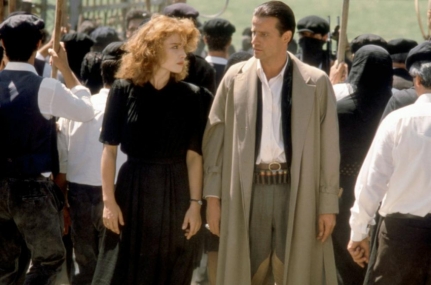 The woeful miscasting of Christopher Lambert is matched by a sleeps-with-fishes performance from Barbara Sukowa. Some of the backgrounds are eye-pleasing under Alex Thomson’s camera, but Cimino’s cement overcoat direction and the Mixmaster editing render confusion. Glum, violent drag cost $16,500,000, was chainsawed by critics and barely scuffed up $5,407,000. Another instance where the backstory is more fun than the movie. *

*Internecine warfare and lawsuits erupted between the messianic director,a flummoxed producer and the panicked studio and between the cross-firing writers. Producer Bruce McNall on enfant terrible Cimino: “one part artistic genius and one part infantile egomaniac.” Match point, considering Cimono’s rep and his fractured output, but nonetheless pretty rich coming from McNall, who amassed a fortune through art smuggling and later spent 57 months in prison for defrauding a half-dozen banks of $236,000,000. Maybe he deserved a medal instead of a sentence?

The Ego Known as Gore Vidal sued credited screenwriter Steve Shagan: “I wrote 90 percent of it, and Mr. Shagan wrote about 1 percent … Not only did I write one-third of ‘The Sicilian,’ but maybe about twenty of his lines are in it, mostly having to do with cups of coffee.”  Why an offended Vidal would want his name attached to this stale turnip is a mystery, but then he’d recently been responsible for the script to Caligula.

Aiming at the director and writers