THE CYCLOPS—cheese-grater Bert I. Gordon followed his schlock triumphs King Dinosaur and Beginning Of The End with this 66-minute kiddie fave from 1957, laying a grotesque makeup job on actor Duncan Parkin as a one-eyed, 30-foot tall, radiation-mutated dude who growls a lot.  Triple-threat writer/director/producer Gordon then economized by not shelling out any more on further production values than maybe the cost of gas for driving the actors to some film-familiar caves a few miles outside of Los Angeles.

The silliness does have decent actors: James Craig, sexy Gloria Talbott (kind of a wanton beatnik thing going on), Tom Drake and a habitually-sloshed Lon Chaney Jr.  They cower, scream, run, hide, die, conquer.  Lon uses a “scintillator” , which is the scripts novel version of a Geiger counter: he wants to find uranium in the jungle (the jungle around Bronson Canyon outside L.A.) Never one to leave a gimmick or makeup go to waste, Gordon cranked it up again for the mightiness that was The Amazing Colossal Man and its mighty-bad sequel War Of The Colossal Beast. 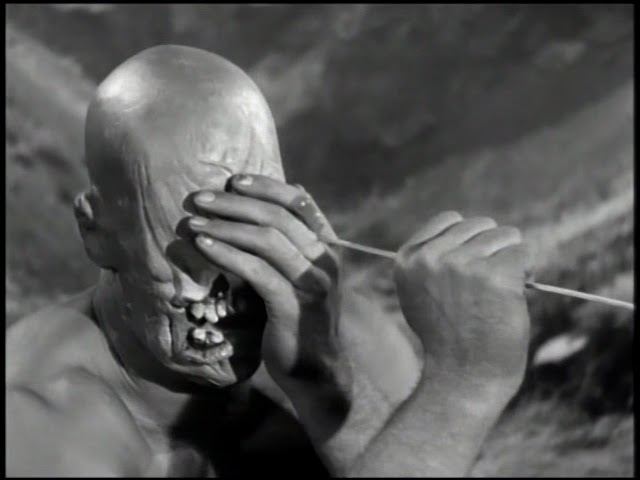 Wait! The guy is already ugly, has one eye–and you…stick something in it?