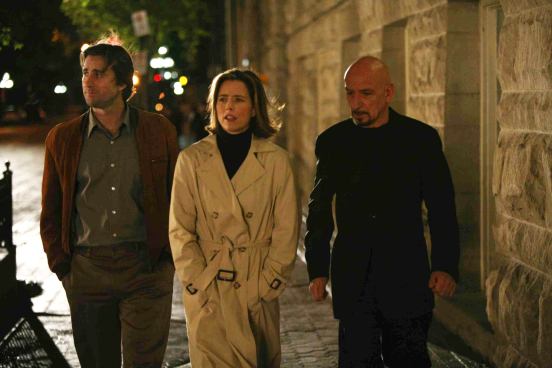 YOU KILL ME, a 2007 entry in the hit man-comedy subgenre, is directed by John Dahl, who had his frequently picked cinematographer Jeff Jur light it in splashy color noir and then fitted it with a nifty soundtrack from Marcelo Zarvas. Well cast and performed, albeit with a major puzzling hiccup, and mostly amusingly written by Christopher Markus & Stephen McFeely. *

A Polish-American hit man (Ben Kingsley), his drinking screwing up his ‘career’ doing jobs for the Polish family gang that runs Buffalo’s street-cleaning operations (battling with the Irish for the gig—does this still happen?) is booted to San Francisco to dry out from his alcoholism. He meets several new people while getting his act together. More ‘work’ beckons.

The interaction with the West Coast folk is generally funny, and the first three-quarters of the slight piece (it runs a quick, slick 93 minutes) has some good gags. Alternately simplifying and complicating the new life of the booze-bound death-dealer are good deadpan turns from Tea Leoni, Bill Pullman (acing it) and Luke Wilson.

The last part, settling scores back in Buffalo, with sturdy assist from Philip Baker Hall (energized), Marcus Thomas and Dennis Farina doesn’t hold together, and credibility (which even a send-up requires) goes on the lamb. The whole Polish-Irish contest seems from another era, and no-one in the cast is remotely convincing suggesting either ethnicity: it feels like apprentice screenwriter contrivance.

Oddly, the element that nagged this viewer the most (about a quarter of those who wrote it up felt similarly) is the performance from the nominally superb Kingsley, whose accent—whatever it’s supposed to be is cloudy—feels wobbly, uncomfortable. Unlike other full-on immersions into character stylization from this master (too many to list), this one doesn’t touch the right tone–too often here you feel like you’re watching “Ben Kingsley doing an accent” rather than accepting who he’s playing. He’s not awful, or weak, just not quite there, and along with the scrum roughness later in the story, it hampers a better overall score.

Filmed mostly in Winnepeg, effectively employing a large amount of clever CGI for background and location cheating, and brought in for a scant $4,000,000, it only returned $3,748,000. With Alison Sealy-Smith, Joyce Eastwood, Scott Heindl, Aron Taeger, Micheline Marchildon and Katie Messina. Though there are a number of funny moments, the best gag comes at the very start, involving snow, a shovel and a bottle of vodka.

* For whatever reasons, in the decade since this came out, director Dahl has stuck to television, leaving this the last—as of 2018—of his eight big screen sallies, which include the sexy classic The Last Seduction and the fine WW2 saga The Great Raid. Always well received by critics, his films rarely have much box-office success (word of mouth mostly)–The Great Raid was a huge money loser. He’s a swell stylist: the big screen’s loss is the small screen’s gain. Co-star Pullman was Dahl’s college instructor, teaching direction at Montana State University. Screenwriters Markus & McFeely went on to a number of superhero epics.

** Is the basic idea of a well-paid assassin somehow so essentially odd that it strikes us amusing, or is the subgenre of comedies about these killers something that naturally moved in from the superspy (also well-trained murderers, albeit licensed) end of the crime pool as much as from the Mob mob?  The Matador, Wild Target, Grosse Point Blank, The Whole Nine Yards, Jerry and Tom, Mr. and Mrs. Smith, Nurse Betty, The Hitman’s Bodyguard...oh, and lest we forget Prizzi’s Honor.