ANOMALISA opens another window into the continually inventive, bitter-funny, sad-hopeful, surreal world that lives in the mind’s eye of screenwriter genie Charlie Kaufman, who, along with Duke Johnson, also directed this critically acclaimed 2015 stop-motion animated comedy-drama (for adults, unless you want your kids to see puppets having sex).

While I enjoy the classic Disney creations of old, I’m not big on the full-animation films of recent years, but this one, perhaps because it’s so strange, is both serious and blackly, bleakly funny, as such geared to grownups, comes from an always interesting writer and is—wisely—only 90 minutes long, hence it kept my attention enough to earn a spot on the blog. (“A Spot On The Blog”–now there’s a title for you…)

“Remember there is someone out there for everyone.” 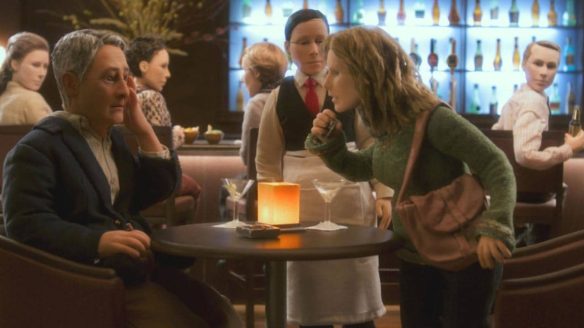 ‘Michael’ (voiced by David Thewlis), a ‘customer service specialist’ (cue gag reflex) who writes books on the subject and gives lectures (scary/absurd right off the bat), sees his existential emptiness fragment into terrifying—and revealing—insanity during a trip to Cincinnati.  In his nightmare visit, everyone looks and sounds the same (all other voices but one are done by Tom Noonan), and most of what they say is essentially gibberish—except for one of his starstruck fans, the sweet, slightly disfigured ‘Lisa’ (voice via Jennifer Jason Leigh). Hope flickers. Loneliness trumps propriety, desperation wrestles reality. Puppet sex coming up! (complete with fumbling)—but also a caustic, sad shuffle through our half-baked, tightly-packaged, machine-stacked modern life, gutted of so much individuality, passion and meaning that it spills out into a numbing, dumbing blur, harvesting identity crisis, especially when the specter of mortality begins to whisper. Maybe he should have gone to Des Moines?

Though Michael’s/Kaufman’s insights may not be breaking rare earth (Death Of A Salesman, anyone?), his hand on the pulse of modern malaise and gift for blessing the eternal search for a matching heartbeat to give it meaning finds a fresh venue in this visual application, and through the poignant expression of universal yearning in the delicate line readings from Thewlis and Leigh. Thewlis’ stress-strained but precise articulation of need and Leigh’s chipper-sad blend of perky wariness pull the heartstrings dimension that the puppet-mocked maneuvers can’t duplicate.**

Originally written by Kaufman as a play (under the nom de plume Francis Fregoli), his feature-length stylization was crowd-funded (5,770 people kicked in) to help raise the eventual $8,000,000 needed to make it happen.*

Critics cooed, the Oscars nominated it for Best Animated Feature (winner was Inside Out) and it scored accolades from various venues. It made but $5,500,000, but is sure to have a long life as a cult film. Mull this: the sex scene took six months to animate to, uh, fulfillment. 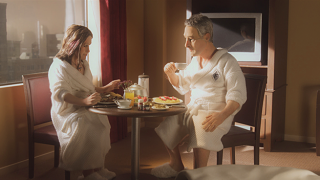 * The hotel Michael checks into is the ‘Fregoli’. A real (thankfully rare) disorder, The Fregoli Delusion is a delusion of doubles: a person holds an imagined belief that different people are in fact a single person who changes appearance or hides behind a disguise. The condition was named for Leopoldo Fregoli, an Italian actor renowned for the ability to make rapid changes of appearance in his stage act. (When the syndrome applies to an entire city, it’s called Washington D.C.)

** Another plus: one movie where the always good, perpetually mistreated Jennifer Jason Leigh doesn’t get abused—talk about overdue. 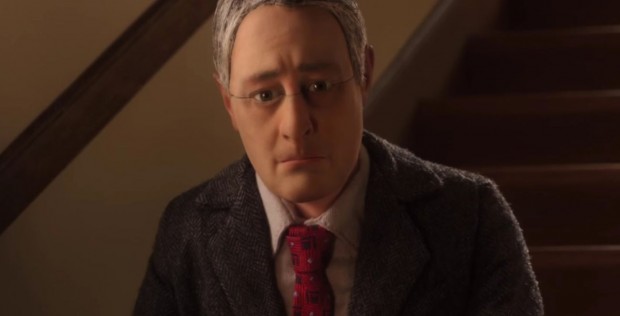