THE LONG GRAY LINE —–break out the Bushmills. This is based on the life of Marty Maher, an Irish immigrant who instructed and counseled at West Point for five decades, becoming a living institution (within another). At 138 minutes, this lengthy, episodic bio, corny and very sentimental, were it in the hands of almost any other director would be pretty tough for anyone other than a bumptious O’Rourke or Hanrahan to digest. But with John Ford at the helm, even the mawkish and silly stuff has some charm. For the mid-50s, it was fine family entertainment. * 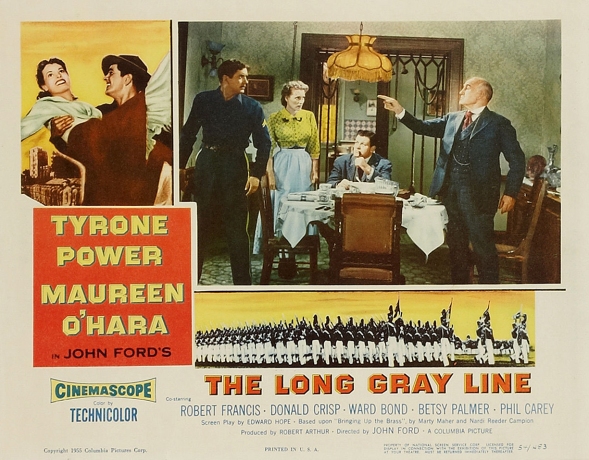 The main plus is a really appealing performance from Tyrone Power, who displays fine light-comedy timing and effortless charm. Though the 40-year old star has to stretch playing the younger version of Maher, his energy carries it with flair and he handles the aged character nicely. Maureen O’Hara lends a pleasing colleen assist as his wife, her best scenes coming as the story shades from mostly comedy to an increasing lament.  Ward Bond (“Master of the Sword“) and Donald Crisp are strong as ever. **

With the exception of the always fine Sean McClory, the supporting cast of young hardies is pretty awful.  The doomed Robert Francis is a bit much, but he gets some lame competition from Philip Carey, William Leslie, Martin Milner, Patrick Wayne and Robert Roark. ***

The settings are attractive (exteriors filmed at the Point), with hundreds of cadets marching around, and the uncredited George Duning/Morris Stoloff score is flavorful, making jaunty use of “Garry Owen”,”The Irish Washerwoman” and other Auld Sod standbys.

Critics dismiss this Ford effort, but it has many fans. Done for $1,748,000, it made money, but “how much” shows up the problem often popping up with box-office stats. Ford’s go-to biographer Joseph McBride gives it a gross of $5,600,000, while his other top rate expert Scott Eyman says Colombia had it $847,000 in the red. The Internet Movie Data Base gives it a million less than McBride. Cogerson posts it 27th place for 1955.

* Patriotic sentiment was working overtime in 1955, with a dozen celebrate-the-country (and usually, the military) pictures doing exceedingly well (conversely, that interesting year also offered another good dozen that took a more jaundiced view of the country’s health) and this was one of two Ford offered up. He honored the Army (or at least, the traditions of West Point) in this one, while his immediate follow-up Mister Roberts was a salute to Ford’s favorite service, the Navy. Always cantankerous, often cruel, during the shoot for The Long Gray Line he took out extra spite on O’Hara, who recounted the misery—and possible causes—in her frank and fun autobiography.

** Sergeant First Class Martin Maher came to the US from Ireland in 1898, and started at the Point as a dishwasher. Enlisting, he was there 30 years in the service, and 20 more as a civilian. Born on June 25th, 1876 (the same day Point grad George Armstrong Custer made his fatal miscalculation in Montana), he passed away at 84 in 1961—at West Point.

*** Robert Francis was getting the stardom build-up (The Caine Mutiny) and received third billing here in his fourth film. It was also his last, as the 25-year old was killed later in 1955 in an air crash.