THE FIGHTING SULLIVANS—-warm heart-breaker true story made into a popular, heavily fictionalized film in 1944, tells of five close-knit brothers, covering them from their childhood scrapes up to young manhood, culminating in their enlistment in the Navy following Pearl Harbor. One of the more moving Home-front dramas to come out of Hollywood during the war, this one, past its obvious tragic elements pertaining to the Sullivan family, had special resonance for countless members of the audience, praying for the safe return of their loved ones. *

Oscar-nominated for Best Original Story (Edward Doherty & Jules Schermer), most of its charm and sentiment remain undiminished over the decades, testimony to the sensitive direction from Lloyd Bacon and the assorted amusing incidents in Mary McCall’s script. For many, it may summon cherished moments of bygone innocence from their own retreating childhoods. Though it ends up in one, it’s not about War, but Family. And, of course, Sacrifice.

“The Navy Department deeply regrets to inform you that your sons Albert, Francis, George, Joseph, and Madison Sullivan were killed in action in the South Pacific.”

Thomas Mitchell and Selena Royle are salt of the earth as the proud parents. The music score (Cyril Mockridge & Alfred Newman) makes marvelous use of “Greensleeves”.  The picture’s single combat sequence, only a few minutes worth, is done with some excitement, though it takes era-standard dramatic license liberty with accuracy. **

With the film’s age taking up the slack on some flat bits of supporting performance, it stands its post as a durable slice of Americana.  Originally released as simply The Sullivans, the box-office take was improved by adding Fighting, and it came in 99th place in a crowded year, earning $3,200,000.

* Steven Spielberg acknowledged that inspiration from this story and film was a partial mover behind his Saving Private Ryan. The brothers were on the USS Juneau, sunk in the Naval Battle of Guadalcanal, one of many desperate surface slugging matches around that island. Juneau went down at night, exploding and sinking in twenty seconds; the search for survivors did not begin for several days. By the time help arrived, the 100 sailors who’d made it through the sinking were down to ten…the total loss was 687 men.

In addition to the five Sullivans, also on board were a total of thirty sets of brothers. The crushing takes-all loss prompted the Navy to keep family members separated on different vessels, and the other service branches to likewise break up similar gatherings. 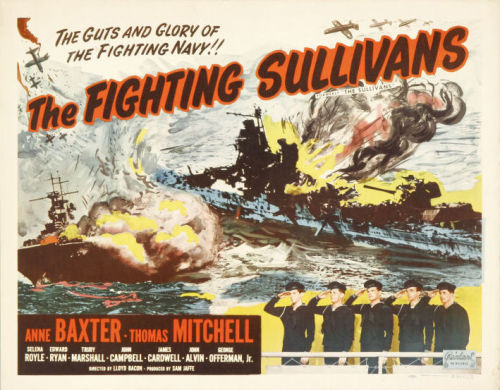 ** In the movie, all the guys join up as one. In life, two had enlisted before the war. The script has the five perish at the same moment. In actuality, three went down with the ship, another drowned the next day. The last—grief stricken, dehydrated and delirious— was taken by a shark five days later.  The battle was a disaster of all sorts for the Navy, and official damage control myth-making went into action, using the boys as symbols of homegrown courage rather than FUBAR casualties.  They were reworked by the script into less-troublesome types than apparently they were back in non-fictional Iowa.  ‘Pop’ was also possibly rather less savory than his portrayal by Thomas Mitchell.

Did it matter?  Does it?  One of the casualties of war, the first: Truth.  Still, the family’s devastating loss was real. As losses mounted the nation needed reassurance.  It’s a good movie.

One thought on “The Fighting Sullivans”