THE NEON DEMON—–an audacious, scintillating, icky, audience-divisive 2016 fever dream from the gifted/twisted mind of director Nicholas Winding Refn takes ‘If Looks Could Kill’ and eyeball-mainlines it with ‘Would They’?  When does vanity become insanity?

Sixteen-year-old natural beauty ‘Jesse’ (Elle Fanning)—orphan, aspiring model— has just touched pavement in L.A.  When her fresh look whets the industry appetites of the right people at the right time, it also poses a direct threat to her terminally narcissistic competition, whose lips are not licked in normally-recognized anticipation. 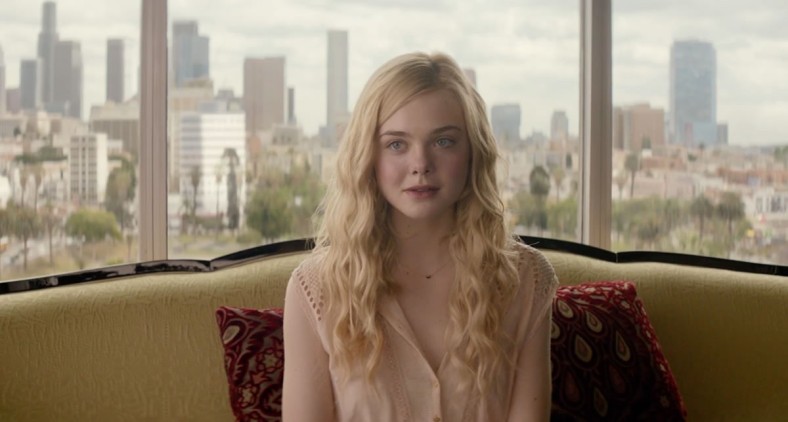 “I can’t sing, I can’t dance, I can’t write… no real talent. But I’m pretty, and I can make money off pretty.”

Not another simple exposé of catty catwalks crawled by fashionistas or a tired takedown of Los Angeles (though it looks plenty sinister here), Refn’s story, that he co-scripted with Mary Laws and Polly Stenham, is a modern Red Riding Hood horror fable on the obsession with beauty and the seductive elixir of adulation; social forces strong enough to warp reality into nightmare.  Stunning cinematography by Natasha Braier is like an 80s retro bath of neon blues and pinks, with blinding whites for bracing.  Refn & Braier draw emotion out of this electro-fetish color scheme. Even when ugly events occur (and boy, do they, be warned), the compositions are striking, more like a painting than film (and Refn is colorblind). Aiding the creeping unease immensely is a superior, pulsing soundtrack from Cliff Martinez, a ghostly summons to the ’70s/ ’80s throbbing of Giorgio Moroder, Tangerine Dream and Vangelis.

‘Ruby’, a seemingly sincere ‘friend’ (Jenna Malone, excellent), tells Jesse (19-year-old natural beauty Fanning is a perfect choice) “that whole deer in the headlights thing is exactly what they want.”  Intimidating as razor wire, Bella Heathcote and Abbey Lee score chills as the essentially vampiric models who must seize what Jesse doesn’t even have to try for.  Keanu Reeves has a cameo and makes the disturbing most of it.

If you follow this crew, you go down one wicked rabbit hole. There’s no escape from its dark but hypnotic core; it coaxes you in further and deeper. And, ultimately, it’s sick as hell (if you’re up for it)…

“Who wants sour milk when you can get fresh meat?” 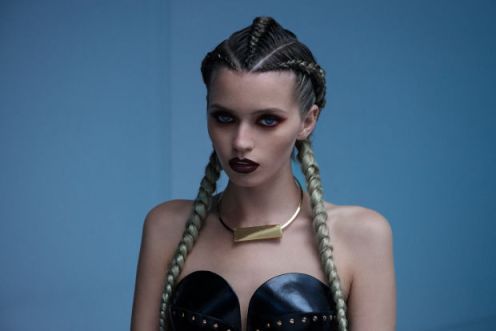 A taste-elective 117-minute course in thematic daring married to surgically precise technique, divorced from sentiment, Grand Guignol on Methaqaulone, it split critics into equal camps of praise and damnation, and only earned $3,400,000 back from an industry-Spartan outlay of $7,000,000. Good bet for cult status; it will find a seduced/repulsed audience further down the runway. You may be struck by it, or be flat disgusted. At the very least, it adds the twist of literalism to the showbiz admonition to the hopeful unwary that the biz “chews you up and spits you out.”