METEOR burst apart like a sack of ice upon landing in evacuated theaters in 1979, patrons warned by critical salvos, panicked word-of-mouth from unlucky victims who’d paid to see it, and a mood of pre-shaken public faith in disaster movies. Three more landed and flopped that same year. With stellar competition, this space cannonball is not only the worst of the quartet; for a number of reasons it marks the nadir of the entire genre. *

First off, the idea, a large space body—here a 5-mile-wide chunk of asteroid—coming at us isn’t far-fetched, just a matter of time. Had some care been alloted the script, there was science at hand to play with. They blew that to pieces with logic gaps and plot holes big enough to fill the Arizona Meteor Crater—where the movie held a premiere gala (it launched where it belonged, in a pit).

The lousy script came from two talented writers: Stanley Mann (The Collector, A High Wind In Jamaica) and Edmund H. North (The Day The Earth Stood Still, Cowboy, Sink The Bismarck! and Patton). It’s lame not just due to their many errors but because it’s so boring—barely any good-bad lines show up to make the 108 minutes of tedium flow better. Character development ranges from bare to none. 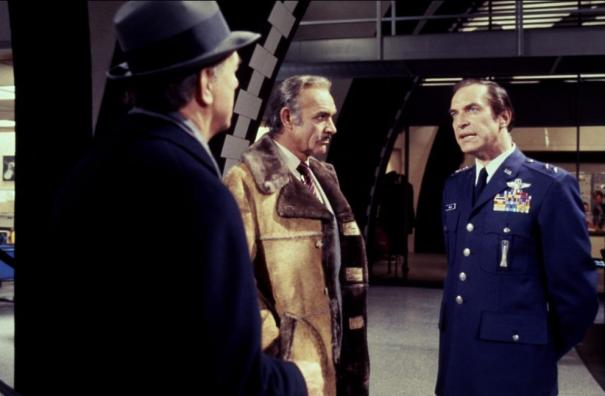 The trance-like pace faults director Ronald Neame, way off his feed this time (he’d efficiently manned The Poseidon Adventure) and mudpies a top-line cast, quality actors who might’ve hoped they’d signed onto something more than a fun paycheck, possibly guaranteed some style. Sean Connery, Natalie Wood, Karl Malden, Brian Keith, Martin Landau, Trevor Howard and Henry Fonda all flounder. Connery ambles without conviction, Wood looks tired, Keith speaks only Russian (kudos to him).  Malden and Landau must have flipped a coin for their parts and Marty got the one that required yelling—his performance is so over-the-top it’s hilarious: sensing what a piece of crap it was, he must have been horsing around on purpose. The broken-subway-river-muck-cascade they endure is surely the dismal low point of their careers; a million pounds of Bentonite imitation mud-goop was flooded onto the cast in a silly looking sequence that was not just uncomfortable but dangerous to film.

Worse/worser/worst: en route to the giant mud bath are truly calamitous special effects, so cheap, crummy and obvious if you paid to see them at a theater you’d be throwing Cokes at the screen.  An atrocious avalanche (with footage lifted from the 1978 turkey of the same name) and a tidal wave that wouldn’t cut it in a Godzilla movie are followed by the ‘destruction of Manhattan’, so shoddily done (including the rather queasy smashing of the then-standing World Trade Center buildings) that a slow five-year-old would feel ripped off.

More trying than the above are endless repeated shots of the oncoming rock and the joint US/USSR rockets launched to blow it up before it hits. The meteor was a piece of lava, suspended, rotated and then optically enlarged to look scary: Connery quipped that it resembled “little balls of shit”–say it in his accent.  Pathetic model work (the ‘rockets’ were less than two feet long) is more like something you’d see on the old Star Trek TV series. No, they’re not that good—and droning closeups of these horrible snap-together-paste-decal kits must take up a good ten minutes of running time in total. It’s punishing.

We’re launching sex toys at it?

With Richard Dysart, Joseph Campanella, Bo Brundin, Bibi Besch and Sybil Danning. Someone bribed the Academy Awards to nominate it for Sound—basically just using the familiar explosion noise we’ve heard a million times. It mercifully lost to Apocalypse Now (no one longing to smell asteroids in the morning). The cost was $16,000,000, not that it shows. The box-office take in the States was merely $8,400,000, 60th among releases.

* The other cast-maimers that disaster-us season: The Concorde…Airport ’79, Beyond The Poseidon Adventure and the remake of Hurricane. The first two are bad, but have more laughs than Meteor, which is so frickin’ dull. Hurricane is no masterpiece, but it isn’t as terrible as its rep.