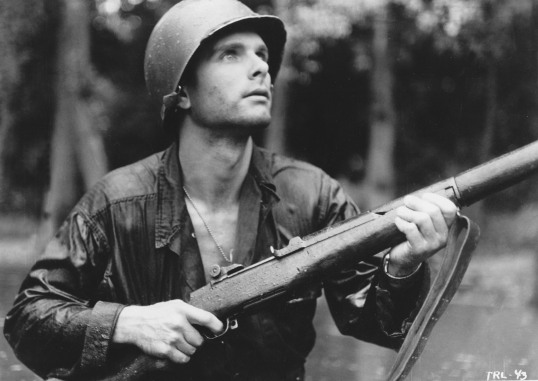 THE THIN RED LINE—–James Jones’ intense 1962 novel, wrenched from his personal WW2 experience, won renewed and deserved attention in 1998 with the release of Terence Malick’s elegiac epic take, but only a ghost platoon of film nuts recall the first, bleak version that came out in 1964. *

The noisy combat is clumsily handled, a surprise considering the director was Andrew Marton, noted as a second-unit expert (Ben-Hur, Cleopatra, The Fall Of The Roman Empire). He’d just been chiefly responsible for the spectacular and complex battle set-pieces in The Longest Day and 55 Days At Peking. As a fully credited director Marton had scored with King Solomon’s Mines and The Wild North but he fumbles the drama here, and allows the unsympathetic Dullea to over-do his creepy character into Method-infused indulgence. Warden is okay, though his pointlessly bullying Sergeant strains patience.

Ham-fisted comic book scripting is credited to Bernard Gordon. Malcolm Arnold turned in the weakest, least inspired score of his career. Filmed in Spain, with little attempt made to suggest the South Pacific. An example of the sloppy disconnect is one segment where the troops are slogging through a swamp, and suddenly the c.o.’s jeep pulls up, on a road—in the jungle–right next to them. The risible sequence with a soldier (Doll’s uh, ‘foxhole buddy’, as it were) capering about in kimono and drag makeup for the hooting GIs before the party turns into an utterly absurd ambush/massacre is just flat-out stupid.

* Jones 510-page novel was the second part of a war-trilogy, begun with “From Here To Eternity”, concluding with “Whistle”. He’d been an infantryman in action on Guadalcanal, surviving the contests for the nicknamed landmarks in the story. While the Malick version is a much better movie (and twice as long), neither do justice to the book, which made you sweat while turning the pages. Those familiar with the conversations in the latter version between Nick Nolte and Elias Koteas may note that, unless they were present in the novel (read it so long ago I can’t recall), it seems Malick simply appropriated them uncredited from Gordon’s script for the earlier attempt. At any rate, they play much better in the ’98 go.

Amusing comment from co-star Philbrook, who’d done a fair amount of TV before coasting into European cheapies: interviewed by an Iowa newspaper in 1963, asked what to tell young people who wanted to pursue acting— “Don’t do it.”