MIDNIGHT COWBOY got the drop on 1969’s other dueling cinema pistol-packers, each interpreting Americana in their own fashion, both expanding the frontier of movies through the lens of a cultural touchstone and at the same time further illustrating the yawning divide between warring camps of the Generation Gap. These brazen buckaroos (this one even named ‘Buck’) shot it out for shares of praise, paydays and prizes. *

Nice-looking, affable and clueless as an armadillo, Texan hick ‘Joe Buck’ (Jon Voight, 29) leaves the stifling Nowheresville of home (and its squalid memories) for the Oz of New York City, hoping to use his skills as stud (his brains not a draw card) to make woo and money from what he presumes is a ripe orchard of Manhattan’s horny rich ladies. The city turns out to be anything but Emerald, and the adrift sap soon forges an unlikely bond with grungy street hustler ‘Ratso Rizzo’ (Dustin Hoffman, 31), a seedy, equally needy character a world away from the actor’s breakout ‘Benjamin’ of The Graduate.

Fate had already been unkind to these two dopes, and the whisper-thin plot (Waldo Salt wrote the causation-jagged but often brittle-funny script off the harsher 1965 novel by James Leo Herlihy) and especially the attention-yanking direction (Britain’s caustic John Schlesinger saying hello to America by kneecapping it) pile on the humiliation and misery, nonstop, for 113 compelling but uncomfortable minutes. 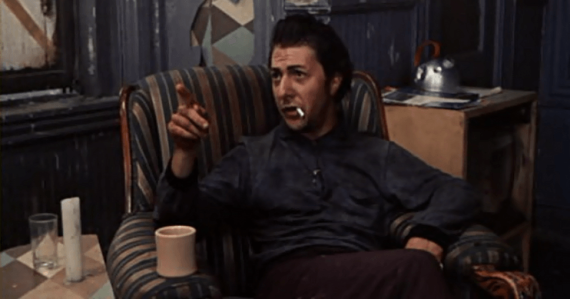 Since the direction stacks the deck by having not a single character apart from our heroes be at all likable (as it is, Ratzo’s a thief, Joe a prostitute) and the script, its many good lines of dialogue notwithstanding, is bereft of motivation beyond survival (the disturbing teases of Joe’s backstory leave vile impressions but little clarity, and Rizzo’s is a cypher) the movie is left on the shoulders of its actors. They save it, redeem it and make it memorable through their beautifully calibrated performances, with Hoffman’s hobbled sleaze edging Voight’s guileless clod by just a hair. Their casting was inspired, and a healthy alchemy of professional competition drove them into a workable and winning rhythm (you don’t want Ratso making dinner, though). Another smack-dab choice was a secondary player—the great John McGiver—who gets the wildest role of his career. It’s just a few minutes, but so convincingly nutty he’ll creepily remind you of one of those times you may have been in too close a small space with too weird a fellow human.  It’s a little movie-lore crime that McGiver wasn’t nominated for Supporting Actor.

“I’m gonna use you I’m gonna run you ragged….You and me can have fun together. It doesn’t have to be joyless.”

John Barry’s loneliness-tinged score would have worked fine on its own, but was greatly buoyed by the perfect-fit addition of the song “Everybody’s Talkin'”, which became a hit: its freedom-wish burdened by regret is forever indelibly linked with the underlying sadness of the film. **

Schlesinger and producer Jerome Hellman brought it in for $3,600,000, initially worried no-one would go see it because of the tawdry subject matter and X-rating. Reviews all lauded the acting, but many slammed the slanted and showoffy direction and overall venal tone. Then the crowds came in, and kept coming, to the tune of $44,800,000, the second biggest haul of the year. When the Oscars rolled up, it took Best Picture, Director and Screenplay, and secured nominations for Voight and Hoffman’s leads, Sylvia Miles as Supporting Actress (no thanks) and Film Editing. ***

* Beyond top-quality performances, how much you may enjoy Schlesinger’s scrape at the fetid loins of what he saw as a soul-less culture may come down to a matter of taste. To one degree or another most of us can relate to defeat and loneliness and the film struck deep chords with many.  1969 was a key year in the turnover of Old Hollywood to the New, as the nation wrestled with its conscience over everything but baseball. Using a ‘cowboy’—the artificial kind— was a direct challenge to an underpin girder of who we were, once and present. With Joe Buck’s tangled trail (which headed East) the competition saw Butch Cassidy And The Sundance Kid (#1, with hip anti-heroes), The Wild Bunch (#18, brutal anti-heroes) and True Grit (#7, ornery Old Guard Hero). Plus there was Once Upon A Time In The West (#27, served with espresso). Ratzo’s rationalizing found non-traditional support among Easy Rider, Bob and Carol and Ted and Alice, The Damned, Fellini Satyricon, Last Summer, Alice’s Restaurant, Medium Cool and The Magic Christian. 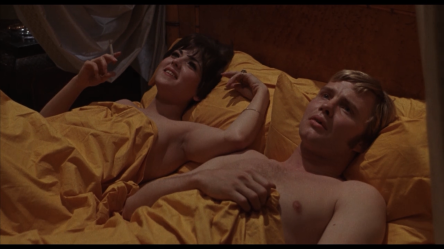 ** Composed and recorded in 1966 by Fred Neil, it was covered by Harry Nilsson in ’68 to little success.  Used the following year for Midnight Cowboy it sailed to #2 for Adult Contemporary and #6 for Pop on Billboard’s charts, tagging #73 of their Top Hot 100 singles for 1969. Selling over 1,000,000 copies, it brought Nilsson a Grammy and fame (his career had been in stall: he was working as bank clerk to keep eating). At least 100 artists have put out cover versions. 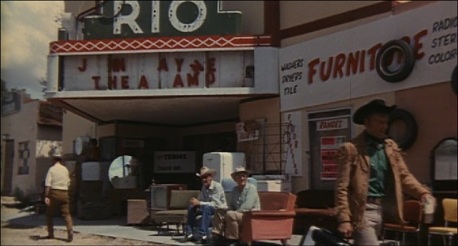 *** Famously, John Wayne hefted Best Actor for his flamboyant True Grit, with expected kvetching from assorted quarters that it should have gone to Dustin. The Duke didn’t like this movie (no surprise), but he did comment to his secretary after a screening: “Damn, Hoffman and Voight were good. Both of them. More than good—great. That is acting. But if I had to choose between the two of them, I’d pick Hoffman. He has the better role. Whoever thought I’d say good things about a movie featuring a gigolo, a homeless Italian dwarf, and gang rape?”  The Rooster-Ratzo rumbles to one side, I’d have given both Picture and Director to the un-nominated The Wild Bunch (as well as Cinematography, Sound, Music Score and Editing) and would have put that classic’s William Holden on the roster to compete for Best Actor instead of Peter O’Toole’s Goodbye, Mr. Chips.  I just can’t stomach the coarse Sylvia Miles: that Supporting Actress award (it went to Goldie Hawn for Cactus Flower) should have adorned Susannah York’s mantle for They Shoot Horses, Don’t They?, admittedly a movie so depressing it makes Midnight Cowboy look like Mary Poppins. And I would for dang sure have nominated the great John McGiver! 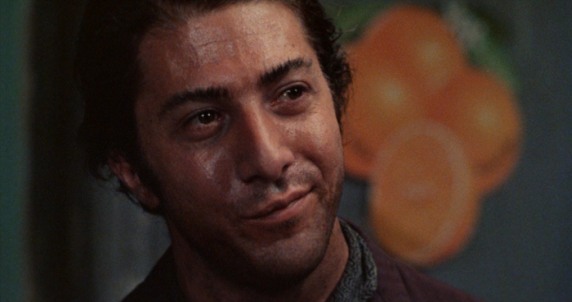