TAI-PAN —–a 20-year hush of anticipation turned to 127 minutes of crushed boredom when this leaky, creaky adaptation of James Clavell’s exciting 1966 bestseller finally hit the screens with a skid in 1986; the grief from reviewers and groans from evaporating audiences leaving producer Raffaella De Laurentiis $25,000,000 investment shredded like a bamboo seaside village after a typhoon, with only $4,007,000 grossed to show for all the trouble.

The hassles came from making the would-be-epic in The People’s Republic of China; this was the first western film shot in the Communist country.  The bureaucratic and censorship nightmares might have been worth it had not the results in scripting, direction and performance been so poor.  Rugged and likable Australian bruiser Bryan Brown had so impressed with his work in Breaker Morant and The Thorn Birds that it was a shame to see him flail under Daryl Duke’s limpid direction and a screenplay by John Briley and Stanley Mann that gutted Clavell’s 734 page adventure, set over several mid-1800s decades in & around Hong Kong.

None of the color, intrigue or action that made the book a lusty read comes across. Not  even with aces like Jack Cardiff manning the camera and Maurice Jarre on scoring duty was this rudderless junk brought to port.  Along with stunting Brown’s trajectory as a lead, due to its sexual content it hurt estimable Chinese actress Joan Chen, a huge star in her home country.  Her story, along with the background lore of previous attempts to film the book, are of more interest than the dismal end product. * 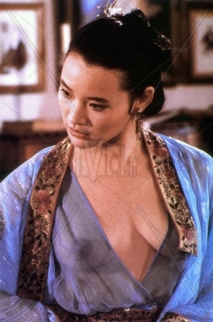 Besides the People’s Republic, location filming was done in Hong Kong and Macau. The drag about this movie is that— apart from utterly failing its source—it’s too dull to be bad-fun. Flavorless supporting cast: John Stanton, Tim Guinee, Bill Leadbetter, Russell Wong, Kyra Sedgwick and Janine Turner. Would have been much better done as a mini-series, the case with Clavell’s Shogun and Noble House. Go to the beach, read the book. 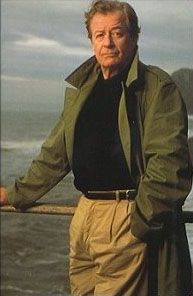 Rights for the film had been purchased (for a whopping $500,000) back in ’66, with the idea to cast Patrick McGoohan, hot at the time from his TV series Danger Man/Secret Agent Man.  Deemed too costly to mount, it was shelved.  Later, Carl Foreman wrote a script. Then George MacDonald Fraser (sire of ‘Flashman’) did one.  Richard Fleischer was on to direct and they were giving Steve McQueen a staggering $10,000,000 to star. He pulled out, employing some of Tai-Pan hero Dirk Straun’s tactics by keeping a cool million bucks advance fee.  Post-Steve, Roger Moore was interested but again it fizzled. Sean Connery (a natural, but too old by then–Clavell always wanted him for it) turned it down.

From Joan Chen: “Having experienced the adulation of the millions in my late teens, I became a much reviled traitor, who brought shame to China after leaving for the US and later for playing the part of the mistress to the white man in Tai-Pan. The capricious and precarious nature of the mob sentiments was a nightmare, which I knew well.”   She recovered with the success the following year of The Last Emperor.