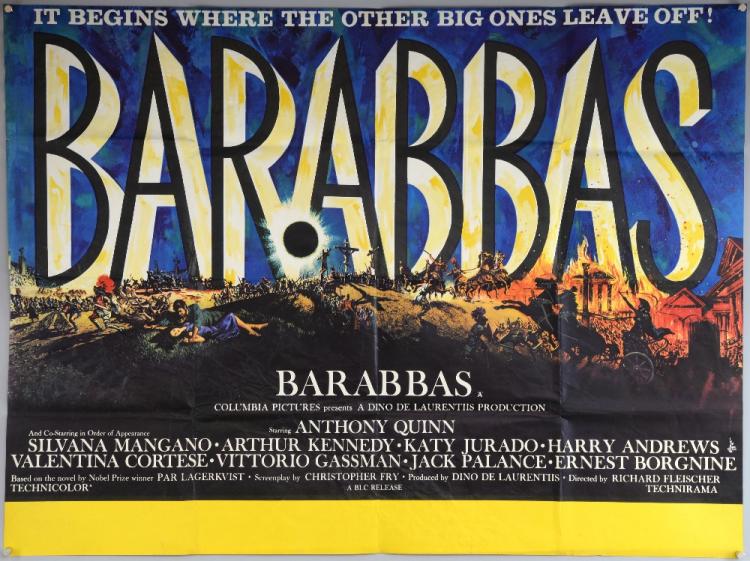 BARABBAS — the big-scale 1961 adaptation of Pär Lagerkvist’s Pulitzer-winning 1950 novel makes for a thoughtful and intelligent, if grueling, spiritual saga; while not as financially successful or well-remembered as others in the genre, it rates quite well as a Biblical epic. In a brooding flock, it’s certainly one of the darkest.

Freed from a death on a cross next to Jesus, loutish criminal Barabbas (Anthony Quinn) continues with his drunken debauchery and brigandage until he’s again caught, and this time condemned to many years of slavery in Sicilian sulfur mines. Released from the hellish underground after surviving an earthquake, he and his fellow convict ‘Sahak’ (Vittorio Gassman), a resolute Christian, are forced to become gladiators, to be part of the amusement for Nero’s voracious mob. Will the crude, cursed Barabbas ever see the light, out of a life made of pain, in a world given to misery? 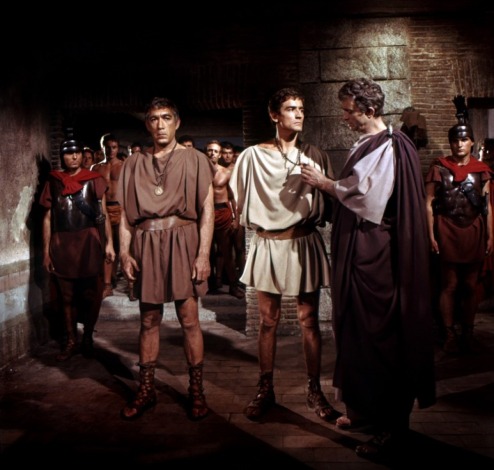 Directing, Richard Fleischer does a superb job ordering producer Dino De Laurentiis hordes of extras around impressive sets and getting quality work from a fine cast.  He luckily works off a literate screenplay from the celebrated Christopher Fry. *

Really well done are the scenes in the ghastly mines and the spectacular gladiatorial training and arena sequences. Fleischer had a stroke of luck and inspiration when a solar eclipse occurred and they caught it to use to eerie effect for the film, as backdrop for the Crucifixion of Christ. Appropriately solemn and portentous scoring from Mario Nascimbene is another strong feature (he’d worked with Fleischer in The Vikings).

Quinn seems the perfect choice for this one: he’s in in his lusty physical element, ably working a full-story-length character arc, and there is solid thesping from Silvana Mangano (who gets a memorably staged stoning death of the sort that certain of the pious in that part of the planet still see fit to dish out), Arthur Kennedy (calmly indifferent as Pilate), Jack Palance (great as celebrated gladiator ‘Torvald’, imposing and scary, even maniacal, yet without going over-the-top), a subdued Ernest Borgnine, Katy Jurado (full throttle and arresting even when dubbed).

With Harry Andrews, Norman Wooland, Valentina Cortese, Michael Gwynne, Friedrich von Ledebur, Ivan Triesault and Douglas Fowley.  Lost in the mass of extras is a 17-year-old American girl, picking up some spare lira while living in Italy at the time—Sharon Tate.

137 minutes. Released in the US late in ’62, it grossed $8,300,000. Among the cast, jostling for their own personal stakes off-screen, Borgnine and Jurado were in a tempestuous 4-year marriage at the time, while Mangano was rather more conveniently married— to producer Dino (theirs lasted 39 years).

*Esteemed playwright Fry had earlier pitched in on Ben-Hur (without credit) and would later handle John Huston’s ambitious The Bible…in the Beginning. Here he received uncredited assistance from Nigel Balchin, Diego Fabbri, Ivo Perelli and a fellow with the rousing name of Salvatore Quasimodo. 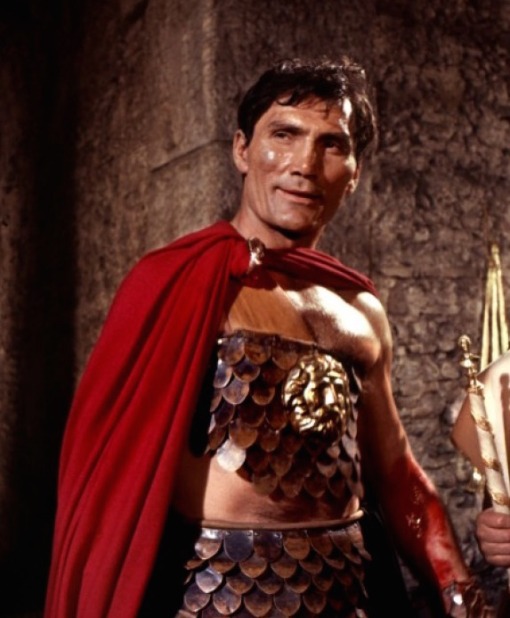