RUN OF THE ARROW somehow quivered past my western-honed eyes, through kid-dom (when I would have dug it), past the smart aleck zone (which lasted from 7th-grade until maybe the last election) all the way until a few weeks ago, when, at the very pea-knuckle of Knowing & Understanding All Things, I finally caught up with this wild child 1957 forefather of Dances With Wolves. 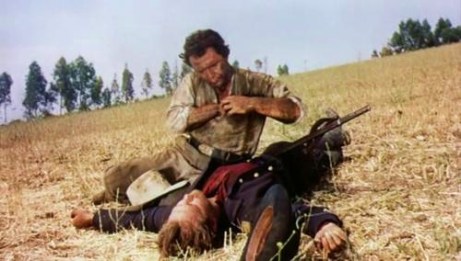 I love westerns.  I’ve seen nearly 400, let alone Duke-knows-how–many episodes of their TV kin. I also like a number of the movies made by hard-nosed writer-director Samuel Fuller, even hysterical cheese like Hell And High Water (if you’re going to make pulp, pound the hell out of it), and this film has some reputable actors. Fuller’s script fires a lot of arrows over a territory-sweeping 86 minutes. Excited to finally lasso a rough-edged actioner I’d missed all these decades, and buoyed by revisionist reviews (including one from the critic I most admire) so exultant they’d make you think Fuller’s profile should be sculpted next the monument of Crazy Horse being carved out of the Black Hills, I filled my saddle bag with popcorn and started chawin’. Good thing I didn’t gag to death from laughing. They don’t get much hokier. 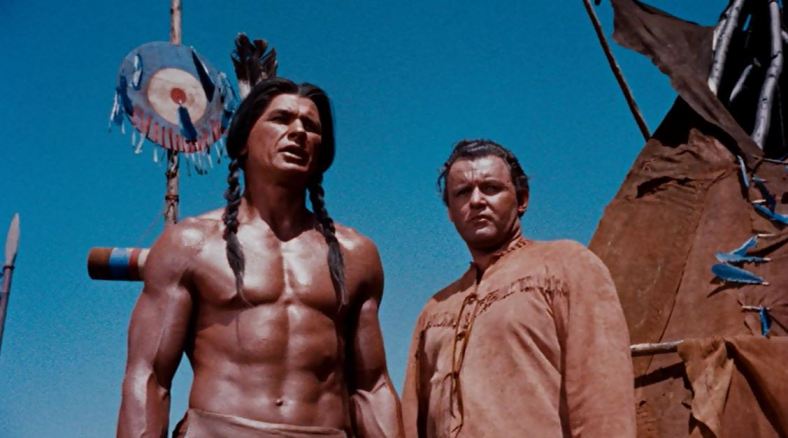 Shooting the last bullet of the Civil War into his last Yankee, Irish-immigrant Rebel soldier ‘O’Meara’ (Rod Steiger), declines to surrender and heads west, where he’s taken by the Sioux.  After being tested in the title survival-run, he becomes a member of the tribe. Then, the damned blue-belly cavalry shows up and loyalties fly like…like the stem-to-stern inaccuracies of the horselaff script: gaffes and goofs historical, cultural, geographical, logically, dramatically.  I can take a lot of guff (a given in westerns) but this had me hoot out loud in derision. 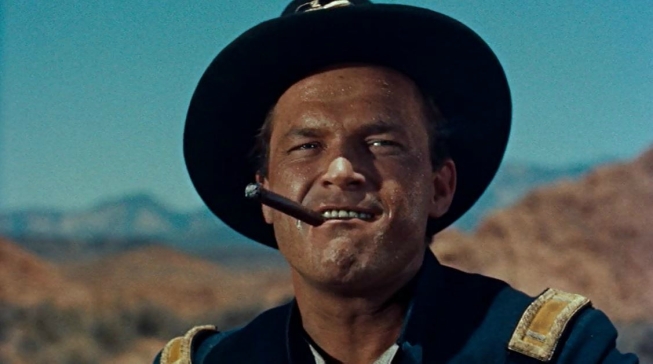 Is this the face of a guy who will underestimate Buffalo Horn?

Fuller was a anything-goes puncher for impact (see Shock Corridor), but he outguns himself here. O’Meara plugs Yankee ‘Lt. Driscoll’ (Ralph Meeker) mere yards from Gen. Lee surrendering at Appomattox.  Steiger’s horrible Irish accent would make Dick Van Dyke’s ‘Bert’ from Mary Poppins file a complaint with the State Department.  Fuller puts the Dakotas-roaming Sioux (led by a cut’n buffed Charles Bronson) in the desert rocks of Utah, erects North Dakota’s Fort Lincoln down there, too, has Rod O’Meara master the tribal language faster than you say “Is that a phony brogue in your pants?” and engage in the silliest conversations with the parade-bedecked ‘Yellow Moccasin’ (Spanish actress Sarita Montiel, dubbed by new kid Angie Dickinson) this side of F-Troop. He gives stunt man-at-large Chuck Roberson the silliest quicksand-death in a long movie history of same—and has Lt. Driscoll (of course a glory-hound swine) miraculously survive and show up with Brian Keith to lead the cavalry, confront Rod O’Meara and start a war with the Sioux. Meanwhile, they talk about their feelings. 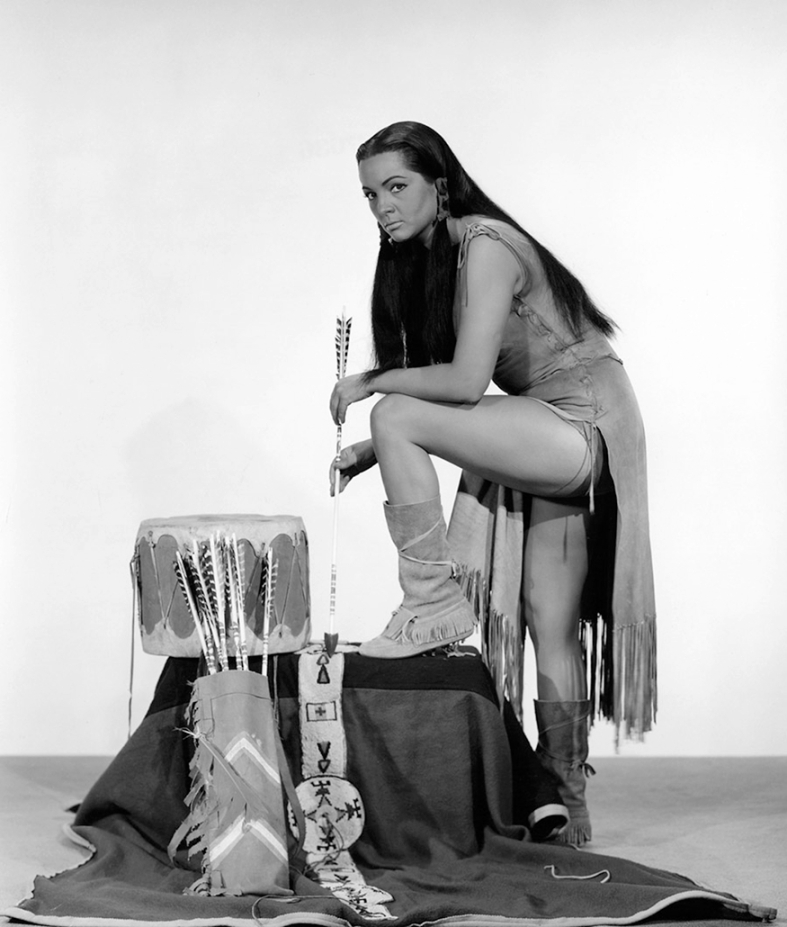 I read the reviews, watched this, and decided to apply for a job as a crawl-space inspector. Sometimes, everyone is wrong: this is one of those times.

Fuller gets points for having his characters talk over some weighty issues like race, loyalty and religion, and in doing so tasks the ideologically conflicted country to acknowledge and face up to its assorted hypocrisies, but the sincere attempt is delivered with the delicacy of an anvil in a Road Runner cartoon. Again, I love the genre, like the director and enjoy the actors, but I can’t buy this wagonload. Many reviewers see it as a masterpiece: some of the stuff I read is almost as hilariously over-the-top as the movie.

Or are you just glad to Sioux me?

I’d call this hams-down Steiger’s worst performance. Meeker and Keith are okay, given the material. Montiel is wasted. With Jay C. Flippen (usually great, here awful), Olive Carey (oh, but she could mangle lines), H.M. Wynant (the following year would give grief to Tonka), Frank De Kova (malarkey as Red Cloud), Tim McCoy (prior to his movie cowboy career he’d actually been adopted by the Arapahoes as a brother, “High Eagle”), Frank Warner, Chuck Hayward and Carleton Young.  Joseph F. Biroc did the decent cinematography, Victor Young provided the score. The climactic battle is furious, bloody for the day, but its staging, like the rest of the movie, is quite unlikely. Ranked #85 for earners of 1957, with a gross of $2,500,000. * 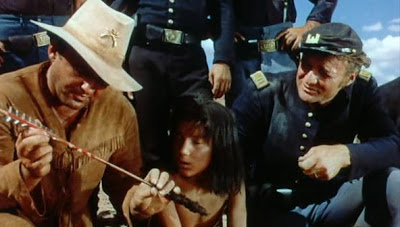 * Publicity maintained Fuller borrowed a copy of the Handbook of American Indians from the Smithsonian Institute (sounds suspiciously like faux-prestige publicity right there), in order to “present an honest, realistic picture of Indian life.”  He’s not the first moviemaker to “present an honest, realistic picture of Indian life”, but his is about as honest & realistic as 90% of the rest.  Steiger did two good westerns, and did a good job in them: Jubal in ’56 and the sleeper Cattle Annie And Little Britches in 1981.  Force-of-nature Sarita Montiel (1928-2013) decorated a few US films (notably Vera Cruz) but was a major recording star in Europe: a real ‘legend’-type character. Her dubstress Ms. Dickinson featured that same year in Fuller’s China Gate, getting an early start fighting those rebel Viet Commies.

I shall teach you our tongue within a few minutes. You will be rapidly become more fluent in Sioux than in your native Irish wordmaking 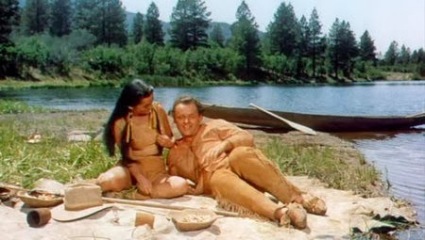 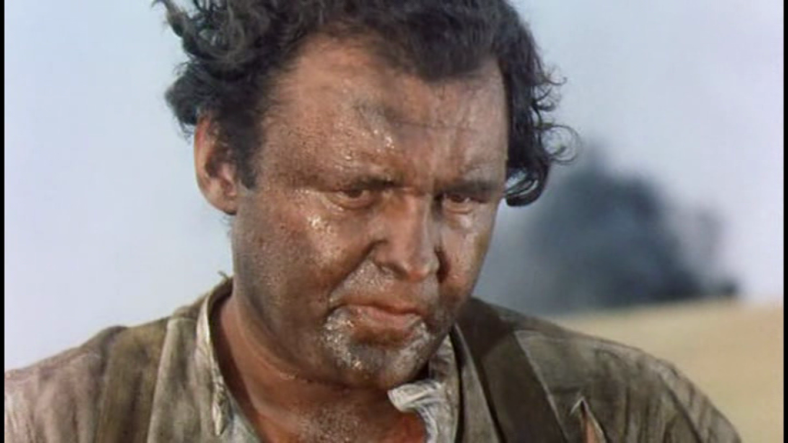