THE DEADLY MANTIS is identified as a prehistoric example of its kith, released from suspended animation at the North Pole (getting ‘things’ out of the ice up there not a good idea, as any lonely Air Force outpost could tell you) by a volcanic blast down in the South Seas, the handy North Pacific inhabited by primeval yet proverbial Japanese monsters. Our handy paleontologist lays it on the line for flummoxed military men and a lady reporter: “I’m convinced that we’re dealing with a Mantis in whose geological world the smallest insects were as large as man, and now failing to find those insects as food, well… it’s doing the best that it can.”  Great, the increasing number of widows will appreciate the clarification. 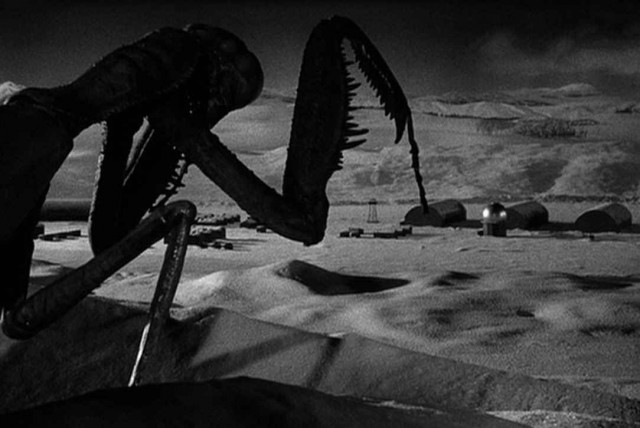 1957 was The Year of the Beast, as this bug-eyed (what else would it have?) rampager joined a dozen monsters of various sizes and attitudes on the loose in drive-ins, giving kids a chance to sit in the front seat of the Olds while the babysitter necked with the j.d. in the back.  At least this one can’t be dumped at the glowing foot of atomic radiation, which does wonders for ants. *

“the shield that could mean the difference between life and death for all Americans.”

Fond recall from childhood (when notching these epics off on Saturday was how we learned that, besides Gina Lollobrigida and Sophia Loren, everything else with awesome dimensions that entered the United States from the outside needed to be destroyed) could obscure the regrettable fact that this one is not very good (‘good’ being relative considering the The Giant Claw was also on radar that year). Too much stock footage, it takes forever to get going—and when it finally gets down to the finish, we want to keep it out of New Jersey?  The monster–200 feet long–gets trapped in “The Manhattan Tunnel”, which is really the Holland Tunnel, pipeline to Jersey City, but maybe the screenwriter was not all that concerned with accuracy?

The important thing is the B-U-G, which actually looks kinda cool in the finale, thankfully managing to wreck a bunch of vehicles before it gets gas-bombed (bullets proving useless–like, duh? really now: think how many whacks with a newspaper it takes to conk one yellow jacket).  It had lit, for a while, on the Washington Monument, but decided to spare it (saved for tidal waves and terrorists later). The large mockup of the voracious visitor was made of  paper-maché (studio blurbs insisted it nearly as big as a jet, but..naww…) Smaller models (six feet and one foot) were used as well. 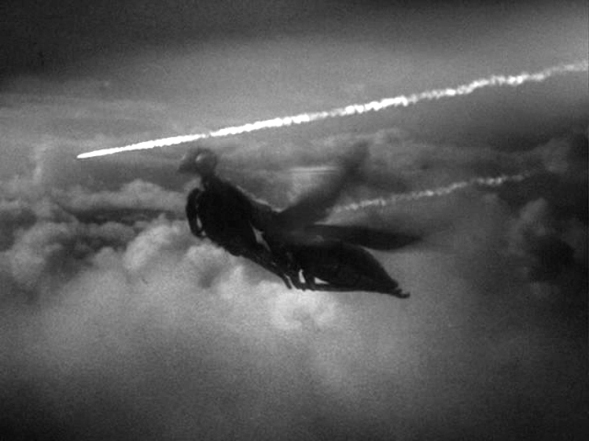 78 minutes, of which about 10 are okay.  Directed by Nathan Juran, featuring the serious demeanor’s of Craig Stevens (‘Col. Joe Parkman’), William Hopper (‘Dr. Nedrick Jackson’), Alix Talton (as the lady reporter, ‘Marge Blaine’), Donald Randolph (‘Maj.Gen. Mark Ford’–why give him a first name?), Pat Conway (‘Sgt. Pete Allen’) and Paul Smith (‘Corporal’). The fortunes of Stevens, Hopper and Conway shortly turned around thanks to landing sensible TV gigs that they wouldn’t have to cough when mentioning, respectively, Peter Gunn, Perry Mason and Tombstone Territory.  Director Juran signed off on The Brain From Planet Arous and Attack Of The 50 Foot Woman, yet he also gave us the nifty The 7th Voyage Of Sinbad and First Men In The Moon. 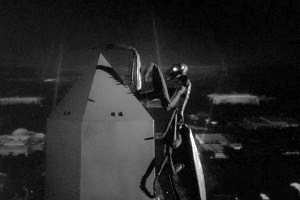 Are there any tourist treats here?

* 1957—was your town or family spared? from The Abominable Snowman, 20 Million Miles To Earth, The Black Scorpion, The Land Unknown, The Monolith Monsters, The Mysterians, Quatermass 2, Night Of The Demon, The Curse Of Frankenstein, The Giant Claw, Cosmic Monsters, Beginning Of The End, The Incredible Shrinking Man.  I spy a couple of bona fide classics in there among those giant turkeys.