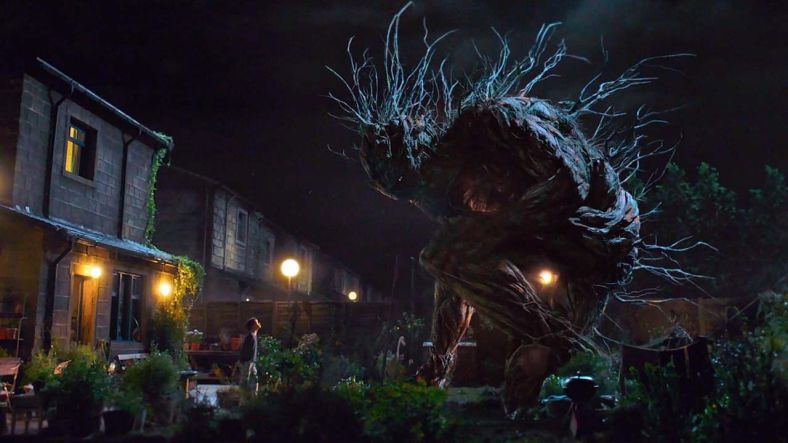 A MONSTER CALLS sets a world of hurt loose on 12-year old ‘Conor O’Malley’. Slight and withdrawn, he’s mercilessly bullied at school. The divorced father is distant geographically and estranged emotionally. Grandmother is on the severe side. His one source of warmth comes from his beloved mum: she has cancer, and it’s not getting better. With the deck stacked in Real Life, through innate talent (Conor draws pictures) and out of psychic overload desperation, the brutally beleaguered lad finds an ally in his imagination, an ancient, giant yew tree that comes roaring to life at key moments and advises the increasingly miserable Conor by way of three lesson-bearing fables, tasking the boy to provide the tree monster with one in return. *

“It ends with a boy holding on tight to his mother. And by doing so… he can finally let her go.”

The unhappy fantasy (not a lot of laughs in this one) was directed in 2016 by J. A. Bayona, who had done a remarkable job on The Impossible, another story (a true one) about a child surviving a bewildering trauma that involved implacable force and threatened family, This one gets an A for effort, a B-minus/C-plus for effect. Even at 108 minutes, it is a wee longish, making its points well before the drawn-out, expected and unfortunately anti-climactic conclusion (nonetheless affecting, especially if you’ve lost your mom).

The special effects are neat use of CGI, but like so much of today’s digital magic they eventually lose their charge.  The animated sequences, illustrating the stories the Monster tells Conor, are quite well crafted. The bullying scenes are—as ever with such things— unpleasant to endure. Lewis MacDougall—one serious-looking young fellow— is fine as Conor, Sigourney Weaver is the aloof grandmother, Toby Kebbell the ineffectual dad. Felicity Jones is a good choice as Mum: the excellent makeup and her quiet performance are convincing: she looks quite believably ill. Chief attribute is the marvelous voice of Liam Neeson as the tree monster: hard to think of anyone who could be more suitable. ***

Produced for $43,000,000, despite generally good reviews, it under-performed, earning only $45,600,000. An audience-finding issue: too dark and ruminative for small children, too gloomy and obvious for most adults. With James Melville and Geraldine Chaplin.

* Patrick Ness’ script came from his Young Adults book of the same title, out of the swelling subgenre in the realm of children’s books that deal with loss. Ness’ award-winning book was born through taking over an idea from another children’s author, Siobhan Dowd (1960-2007), who had terminal cancer.  Ness: “She had the characters, a premise, and a beginning. What she didn’t have, unfortunately, was time.”

** MacDougall from Scotland—what is it, like 95% of the kids in these fantasy flicks are from the British isles? They’re always good actors/actresses but I occasionally feel a  pinch of precise-accent-overload. For that matter, most of this kind of fantasy stuff springs from the same zone: it’s as though the Angry Young Man movies from the dour Britain of the 1950s and 60s have been replaced by Sad Young Kids. The link, aside from geography, class and accent seems to be a basic ingrained philosophy that Life Sucks.

*** “We need a Voice That Lays Down The Law”—get Neeson. This is the sixth time he’s ‘released the Kraken’ for a CGI character. Other growlers of wisdom come to mind: James Earl Jones, Morgan Freeman, Sean Connery, Nick Nolte, Anthony Hopkins.  That’s a whole timbre forest of listen-to-me-or-else redwoods, elms, banyans and oaks. Whom would yew obey?