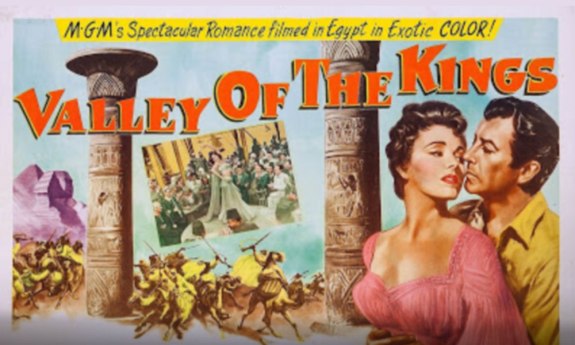 VALLEY OF THE KINGS, an exotic archeology adventure from 1954, can be fittingly  examined in progressively revealed layers: as an eye-pleasing bangle, as a professionally spun tale of greed & danger, hope & discovery and as a time-dated artifact of its era, complete with unearthed in-house (the temple of MGM) hieroglyphics noting romance, rivalry and reckoning, covered by the drifting attention-span-sands of moviegoer memory. Cue the music…

Before digging, start with a map—Cairo in 1900: veteran no-guff artifact-hunter Robert Taylor joins determined legacy-seeking Eleanor Parker and her too-slick husband Carlos Thompson in a search for the treasures of Ra-Hotep (not the founder of Ramada Inns, but a real 1580 B.C. Pharaoh). Is it a stretch to divine that “others” may be interested? That Ruthless-yet-Honorable Desert Tribesmen may ride over the ridge? That fists, swords and thrusting blouses may be called upon? Are we a scroll too far?  Go to snackbar, get some Red Vines, Dr. Pepper and a medium buttered…. 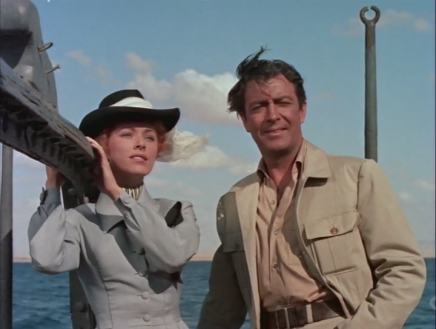 First off, this movie is swell to look at throughout its 86-minute expedition. Spurred by the success of King Solomon’s Mines and other location-shot crowd-pleasers, MGM sent cast & crew to Egypt to shoot around the real deal on a tab of $2,065,000.  Ace cinematographer Robert Surtees gets ample coverage of the photogenic star team doing their stuff in, about & on Cairo and the Giza Pyramids, the Nile, the Red Sea, Luxor and the title gulch, Suez, Faiyum, Mt. Sinai and some of the Libyan Desert.  It’s great stuff, including Abu Simbel before it was relocated for the Aswan Dam, seen here as it had stood for 3,000 years.  Plus, heritage-schmeritage, how often do you get a to-the-death fistfight on top of a monument?  ‘Better get some Dots and Malted Milk Balls, too’…

The release was timed right, as there was tomb-fever upon the land, with Princess Of The Nile, The Egyptian and Land Of The Pharaohs invoking curses and displaying midriffs, as well as another location-lensed treasure-trek vying for attention, chiseling Charlton Heston vs. Machu Picchu in Secret Of The Incas.  The Age of The Drive-In honked forth.

Miklos Rozsa gives it extra atmosphere with his swirling score.  Taylor and Parker work well together (lookout below). He’s steady and sturdy, buoyed by several big hits. Beauteous hard-breather Parker dials back a notch on her tendency to out-pant Susan Hayward (one tough assignment) in the second of her three teamings with Taylor (Above And Beyond and Many Rivers To Cross). Third wheel, the Argentine-exported Carlos Thompson never caught fire (except with Lilli Palmer, who he married).

Reviews praised the views, and it made money—54th for the year with $3,305,000, but with its cost-factor that showed a quarter-mil loss. On hand to sweat and threat are reliables Kurt Kasznar, Victor Jory, Leon Askin and Frank De Kova.

It was a grueling shoot, with less-than-salubrious conditions, searing temperatures and quarters. Director Robert Pirosh (who wrote the script with Karl Tunberg) was at odds with stars and studio, and they thought he was over his head.

Parker’s view: “…was simply a dreadful nightmare. We had a terrible producer who made no accommodations for the company or crew on location. We were in Egypt, out in the desert filming, with no sanitary facilities, no dressing rooms to speak of, it was unbelievable. Robert Taylor and I had to use the bathrooms with the locals, hiding behind coats. Additionally, the director  had no idea what he was doing; the head cameraman was directing the film. Then the crew wasn’t getting paid and our great cameraman told them that we were all going out on strike until everyone got paid.”

“Sources” say Taylor & Parker were having a ‘location-romance’, initiated during Above And Beyond, so that sexcavation adds spark to their on-screen clinches. Plus there’s a belly dancer and a sandstorm. ‘Better get some Good & Plenty, just in case…’ 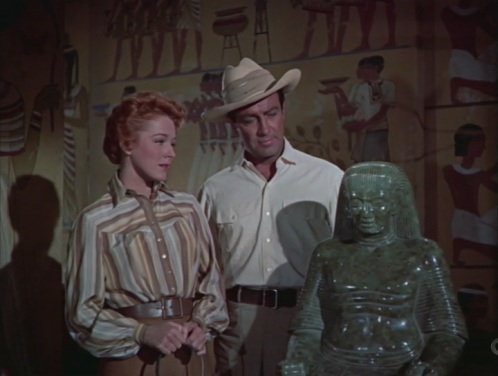