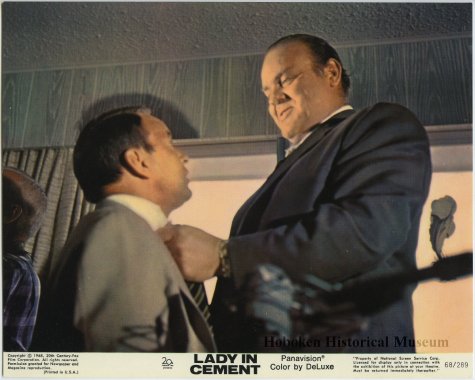 LADY IN CEMENT —–after the previous year’s hit Tony Rome, Frank Sinatra’s second swing at being a 52-year-old hipster private eye is pretty lame, in that special way 1968 rule-breaking lawmen could be (one notable exception). The Olden Days word ‘dick’ to denote cops, generally the off-the-force detective kind, fits here, more aptly in its modern meaning. Frank’s other policeman gig the same year, The Detective, played straight (yet it’s a howler) was financially successful, while this one, played for mostly for laughs, sank like the ‘broad’ of the title. *

‘Broad’ on right will shortly offer to “turn on” Frank

The laughs, such as they are, don’t come from the terrible script and it’s succession of wink-wink smut jokes, but from how embarrassingly crappy the whole dog-beat exercise is, with a D.O.A. plot, colorless secondary characters (one exception), star-stifled direction from Gordon Douglas, and a lack of any sense of urgency, mystery or menace that you’d hope from a detective flick, all clobbered by the con-game attitude that rules it.  That starts with Hugo Montenegro’s wonka-wonk score, which screams “is this cue suggestive enough?” every time it horns in. Though $3,585,000 was expended, it just looks like a slightly upgraded TV movie, making scant use of Miami locations, and the indoor sets are chintzy.  The double entendres are leaden, the casual indifference to the inflicted violence is base, let alone the rampant misogyny and there is the period-accepted sneering at gay stereotypes.** 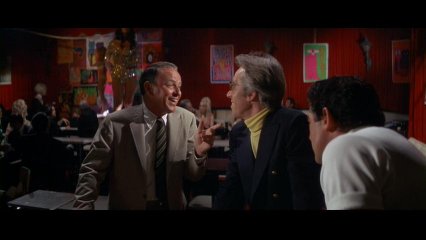 Leading ‘broad’ is 27-year old vavoom-of-the-decade Raquel Welch, who had 37-22-35 to spare but had not yet found a way to say a line with any more actual-person-speak conviction than Jill St. John.  A perfect sex symbol for the first TV-dinner generation: she’s packaged, stacked, hot & frozen all at the same time.  Welch’s  thirst quench was all over the place that Laugh-In/cheer-free year. She ambushed a Mexican accent in Bandolero! (with Frank pal Dino), sought The Biggest Bundle Of Them All (where her unprofessional tardiness on set caused an exasperated Edward G. Robinson to unleash a ten-minute tirade in front of the crew–to no avail) and—more useful and appreciated— was coptered into SE Asia as a morale ornament on Bob Hope’s Christmas Special (‘this is what you’re fighting for, to hell with those damn whining Vietnamese’). She looks great in a bikini, natch, but her HAIR is something else—the only other mammal with as much extra fur might be a musk ox.

No lions were harmed in the making of this picture

Frank, long jaded with putting out much big-screen effort, really phoned this one in.  Only laudable item here is the work from big Dan Blocker, who acts like someone who believes in delivering an actual performance for his paycheck. The early scenes with some curious sharks, snouting around Sinatra’s double and the cemented blonde, are mildly effective (Ricou Browning staged these).

* Frank’s 1967 romp featuring the same character of Tony Rome is also cheese-whiz, but it’s slicker, quicker and more guilty fun.  Along with Sinatra’s pair of swinging dicks (The Detective in May, this in November) ,1968 saw the purple haze trappings of the time gumming the cases of Coogan’s Bluff (early Clint squint), Jigsaw (generic-plus with Harry Guardino & Bradford Dillman), Kona Coast (a hoot with Richard Boone), A Lovely Way To Die (Kirk Douglas, hobbling in #129th), Madigan (overrated, saved by Richard Widmark), P.J. (the spiral of George Peppard), and The Wrecking Crew (mercifully the last of Dean Martin’s ‘Matt Helm’ quartet). There was only one cool cop who counted that Mod Squad year—a dude named Bullitt.

** An example of how lazily daft it all is comes when a local TV station breaks into a broadcast of Daniel Boone with a bulletin on a murder of the owner of a sleazy go-go bar—as if they’d barge into a national network program–one aimed at families and kids– with that—and my sharp trivia-trained eyes note also it happens in daylight: Mr. Boone’s adventures aired at 7:30 in the evening (just the facts, ma’am). Tony Rome may be a dick, but Daniel Boone, as we all know–“was a man”… 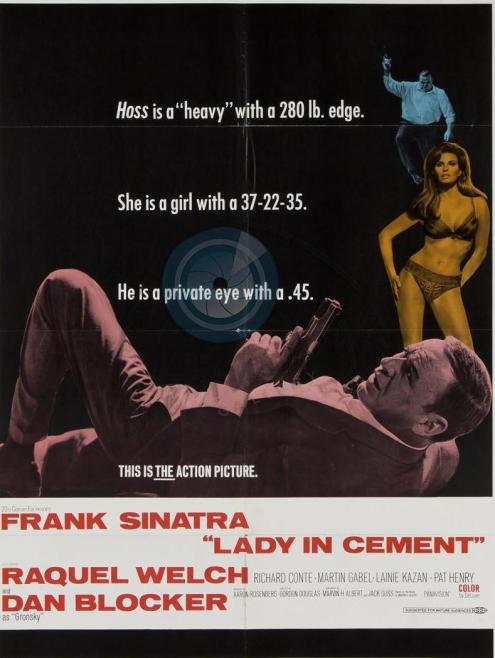