OUR TOWN—–since original elements of this lovingly crafted 1940 film were not saved for reproduction, getting a decent print to watch is an issue. Picture and sound quality in available versions vary from—to use the star-system—**1/2 down to *1/2—-a real loss since, at base, director Sam Wood’s 90-minute styling of Thornton Wilder’s classic Americana play is a ***1/2 offering. *

Wilder co-wrote the screenplay for his decade-spanning cutaway view of a small New Hampshire town of the early 1900s. Deeper than a slice of by-gone Americana—and it’s an honest and touching one—its meditation on the fleeting nature of what seems constant has a simple yet profound universality that transcends setting, age and origin in honoring the specialness of life’s myriad moments. Cherish the gift. Brilliant production designer William Cameron Menzies brought his touch to the sets and backdrops, and Aaron Copland provided a beautiful symphonic score.

Retained from Broadway (where it ran 336 nights directed by Jed Harris) were Martha Scott, Frank Craven (who also co-wrote along with Harry Chandlee) and Doro Merande. Recruited new for the screen telling were a 21-year-old William Holden, plus Thomas Mitchell, Guy Kibbee, Fay Bainter, Beulah Bondi, Stuart Erwin and Philip Wood. Everyone, freshmen to seniors, are at their best. ** 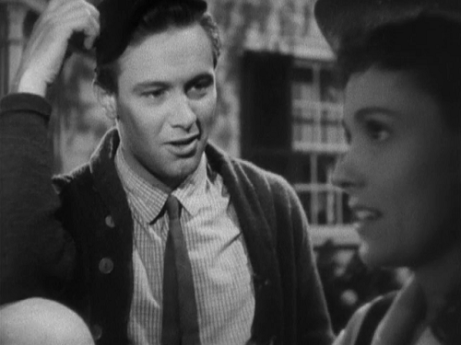 At 26, novice Martha Scott landed the lead in the Broadway production: two years later her film debut in the part of ‘Emily Webb’ brought her, shining with natural beauty and a fresh, unaffected manner, a Best Actress Oscar nomination right out of the gate.

Along with Scott’s nomination, it went up for Best Picture, Music Score, Art Direction and Sound. Audiences didn’t respond; it only made it to #91 of the year’s releases, taking $1,780,000. The mild acceptance may be traced to a combination of a plenitude of top rate offerings, the serious nature of the work and a general popular aversion to ‘arty’ projects: a similar tepid outlay met John Ford’s gloomy, impressionistic The Long Voyage Home, also a Best Picture contender. As it was, the Best Picture winner, Rebecca, was dark, artsy—and came in 4th among the crop.

* That half-star deduction is mainly for purists familiar with the play, as the producer and United Artists saw fit to soften/alter the tragic ending. It still works, and Wilder’s Pulitzer Prize-winning treasure retains era-spanning power, its gentle humanism undiminished by the  ‘progress’ and ‘enlightenment’ of the ensuing decades. Two years later, director Wood took nostalgic Americana in another direction with the corrosive small town of Kings Row.

** Life’s unfairness imitating art: after this lauded entrance, the radiant Martha Scott couldn’t catch a break. Her follow-up films fizzled (no fault of hers) and she was later confused by witch-hunters with singer Hazel Scott and so her career further suffered from ‘graylisting’.  She kept at it, with supporting roles in The Desperate Hours, The Ten Commandments, Ben-Hur and much TV work. A class act.  Philip Wood, playing the troubled alcoholic choir director, died of a heart attack at 45, before this was released. It was only his third film appearance.