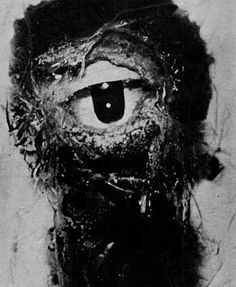 THE ATOMIC SUBMARINE was played relentlessly on the tube back when I was in grade school (shortly after Gettysburg), tailor-made for little kids who wanted to re-enact low-budget chillers that had art direction and stories so simple that a door, your bed and a few pillows could serve as sets and your cat could stand-in for a crewman. Weapons weren’t a problem, because if you were a boy in 1960, you probably had about six toy guns, covering various scenarios.

Director Spencer G. Bennet accomplished his mission over an 8-day shoot for $135,000—and it looks like it to the penny, judging by the Revell-model-in-bathtub special effects of the USS Tigershark cruisin’ for a bruisin’ in the sea lanes around the North Pole (little did they know back in 1960 that in a few quick decades you could row across on a sunny day).  Something has been causing ships (and subs) to vanish. It isn’t the Russians! It’s a giant ‘living’ alien craft, operated by a decidedly freaky-looking eyeball on a stalk, hairy & slimy and with an imperious attitude to go with his ickdom. What’s the US Navy for if not to blow snotty interplanetary bastards like this back to the asteroid belt where they can file paperwork and get in line legally?

Anyway, it worked/works in spite of its manifold ridiculousness (an in-depth and hilarious write-up by Nate Decker can be enjoyed at the site “Million Monkey Theater”). That’s due to a stalwart group of pros in the cast, some atmospheric lighting (effectively spare and dark, not in homage to German Expressionists but likely because they didn’t have enough money for props) and some gruesome-cool deaths for the steadily whacked supporting cast: the guy squeezed in the hatch-lock was a major selling point and subject of discussion at recess.

Back when this was launched and then sailed over to TV, nuclear-powered submarines were a BIG DEAL, bracketed by the 1958 cruise under the North Pole of the USS Nautilus (basically Ike sending Nikita a f— Sputnik message) and the bigger-budgeted (as in, actually possessing one) 1961 hit Voyage To The Bottom Of The Sea.  That these zillion-dollar wonders may be what incinerates us all—well, omelets take eggs.